Sure-footed, relaxed and surprisingly open to ideas like having Shashi Tharoor’s book included in the CBSE curriculum, HRD Minister Prakash Javadekar talks  about how he’s managing all the chaos

At ease. It’s difficult to imagine being in that state when students are protesting on the streets of Delhi, CMs of various states are writing to the President asking for NEET to be revoked, and education activists are crying foul about discrepancies in the RTE Act implementation. But that’s Prakash Javadekar for you. Exuding a sense of calm, after speaking at TNIE’s ThinkEdu Conclave, he spoke about cutting across party lines with as much alacrity as he ordered us steaming cups of masala chai. Despite all that, it still came as a surprise to us, given how touchy the BJP is about criticism of content in the CBSE textbooks, when he lauded Shashi Tharoor’s latest book (An Era of Darkness...) — going as far as to say that he wouldn’t mind including it in the CBSE curriculum as a reference read. We had a bunch of questions for the man at the helm of the HRD Ministry. This is how he responded:

Like Smriti Irani before you, you’ve inherited a surge of turbulent protests from college students. First UoH, then JNU, now DU. Is this a pattern?
Look, a protest is not anti-social as long as it is democratic. Confining a VC for a whole night that too without food, along with senior colleagues, some of whom are diabetic, that is undemocratic and is a human rights violation. So, that is not good. Normal, democratic protests and demands are welcome. The fees in Central universities, where people study for 6 years, are paid for by poor people. After all, in our country, indirect taxes are higher, and you are living off poor people’s contribution to your education. You are answerable to that poor person.

Talking about being answerable, you’ve kept a measured silence. Is that deliberate?
I believe in action, not in responding or making statements. I think our senior leaders have spoken their mind and that’s our line as a party. We believe in freedom of expression but not in breaking the country. Because I am the minister in charge I am available to all sections of people — students, teachers, anyone. At the same time, our viewpoint is clear, I don’t think that the MHRD has to jump in every time because we have many things to do and we are doing it better than the others.

Nobody remembers what their fundamental rights are because they have studied it in rote mode just to earn marks that year. One thing is for sure, the whole education system can be made more entertaining with value education, physical education and life skills intertwined

Does it get to you when people call you the ‘silent’ Minister?
People say that I have a cautious approach and I don’t take it as a brickbat. Parents are angry and worried and they don’t want these kind of stoppages and closures again. After all, parents have sent their wards to study and students have joined the best varsities, so let the study go on and let the debate also go on. In the 70s, we have seen universities shutting down for years — people don’t want that anymore. If there is a problem or debate, it should peacefully coexist along with studies, not disrupt it.

So you stand by the way the police has reacted to the protests?
Nobody, not even the Supreme Court will accept having Azaadi posters being put up. Nobody will allow it.

Is the MHRD drawing a line for students to toe, to ensure protests don’t crossover into damage mode and become issues that need police intervention?
The line need not be drawn by the government of the day. It has already been drawn by the Constitution and the law of the land. If you read the rights and duties together, there is a fine line already drawn.

Yes. I read Shashi Tharoor’s book, An Era of Darkness: The British Empire in India. It is so impressive and it tells you how the British looted India. Why can’t I make it a reference read for students? It is history after all

Indian values? There has always been a charge that education and content is being saffronised.
Everybody must know about our country. Every country does that, so why can’t we have one chapter in every grade that tells you about the country and advanced things about India’s past, present and future. We have decided to do it very soon. There is a very good course called Knowledge, Tradition and Practices of India for the eleventh grade in CBSE designed when Kapil Sibal was the HRD Minister. We can extend it to every class so that everyone learns about India. We will not give anything that is just blind faith that is not based on scientific fact.

Absolutely anything?
Yes. I read Shashi Tharoor’s book, An Era of Darkness: The British Empire in India. It is so impressive and it tells you how the British looted India. Why can’t I make it a reference read for students? It is history after all. And it’s a different perspective that Indians need to know about. It’s not fiction. It’s a well-researched book and I am open (to it). I don’t look at education with a narrow party agenda because our party has no narrow viewpoint on education. We believe it is a national agenda and hence belongs to everybody.

This will be the first admission season after demonetisation happened. Do you think that this will stop private medical and engineering colleges from charging exorbitant capitation fees?
Demonetisation has helped the sector by practically ensuring that people cannot pay large amounts of cash for seats. We will see it in this academic season. NEET negates the capitation fee. But I have found that all (private medical) colleges have doubled their fees. But it will be through cheques and they will have to pay taxes on that and whatever comes with that fee. Once there is some form of banking transaction, it is recorded. We are looking into the fee rise because it has become a touchy subject. We need to provide higher education, and yes, there is a cost to it, but it cannot be extravagant. Even many CBSE schools are charging much more than their cost, so there are complaints from parents. We want private institutions to make money too, but the costs have to be reasonable.

I have found that all (private medical) colleges have doubled their fees. But it will be through cheques and they will have to pay taxes on that and whatever comes with that fee. Once there is some form of banking transaction, it is recorded

What about Engineering colleges? There’s a problem there too, as far as capitation is concerned.
The AICTE has discussed this and it is in progress, whether to have an entrance exam like NEET for engineering courses as well. They have appointed a working group that will come with its recommendation. I hope that at least by 2018-19, the cash component of admission fees and capitation will be a thing of the past, like bogus entrance exams. Paying cash under the table will now be very difficult. Maybe not 1-2 lakhs, but 25-30 lakhs will be impossible.

The CBSE has been at the receiving end for having one-size-fits-all entrance exams. Is that why Arun Jaitley announced the setting up of a separate testing agency?
The CBSE has earned a name for the quality of exams they conduct. They conduct their own Plus Two exams, NEET, JEE Mains and so on, and they do it for nearly 10 lakh students every month. To ease that burden, the cabinet has already moved the proposal for a National Testing Agency. This will become a specialised, nationalised agency that will conduct all such exams as and when they are decided in every field. Paper-setting is a science and the assessment, question selection, all of it is complex.

When can we expect this?
I think it will be cleared by the Cabinet in the next three to four months after which implementation will follow shortly. It will be composed of academics and grassroot-level teachers. There will be a separate team for each exam and we have worked out the skeleton structure for this, but we will fill in the colours soon. They will have a separate budget and the CBSE will be relieved of this burden and they can concentrate on their core job of managing secondary education. They have 20,000 schools and they have a quality to uphold, that itself is a big task. 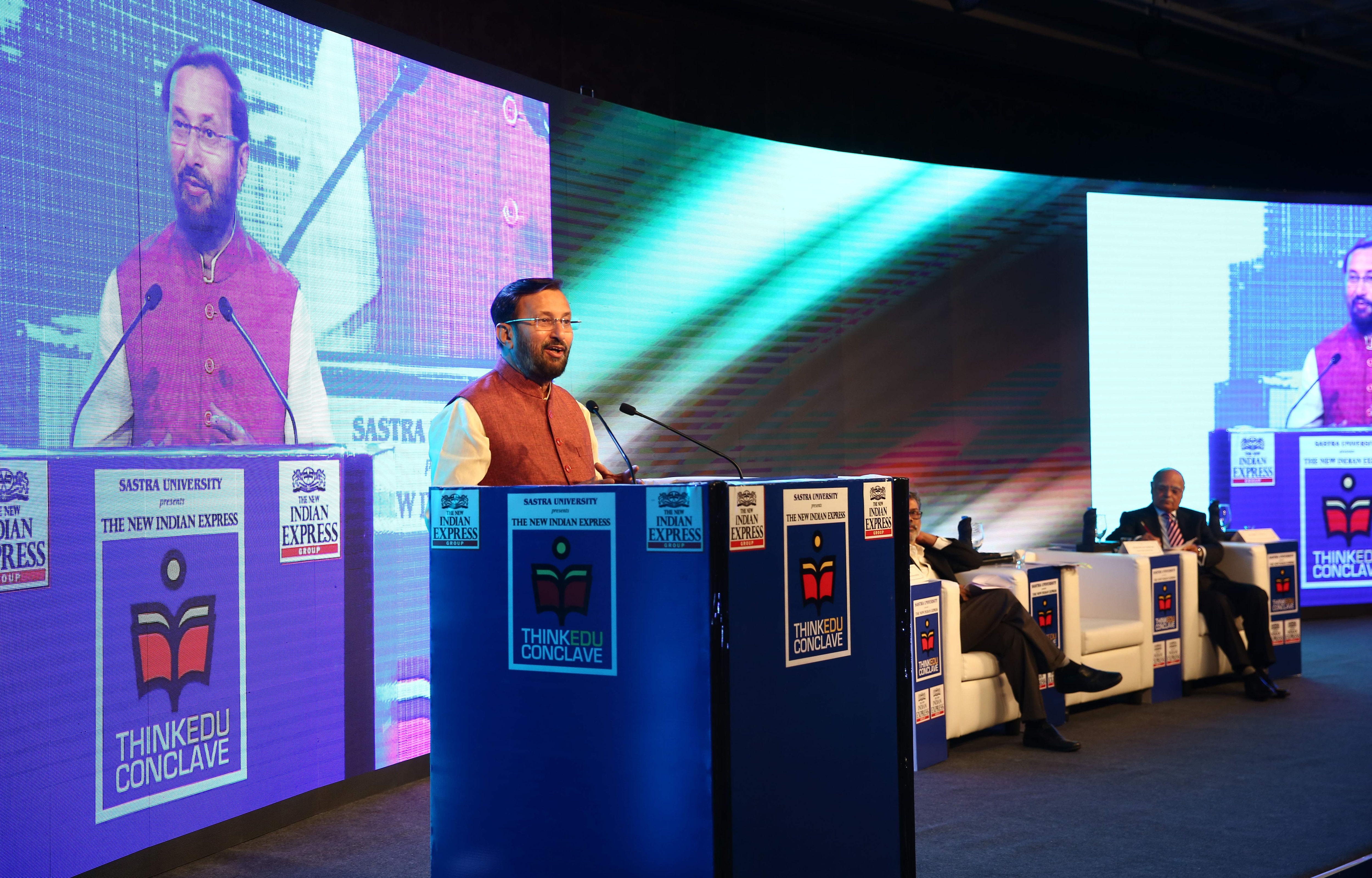 Javadekar calls the education vision of PM Narendra Modi a treasure. He says that they have laid the roadmap for the future. “Every generation needs to look for a reform, we are looking far ahead,” he says

Ever since you’ve been handed the HRD portfolio, you’ve put the spotlight on funding research in government universities. Aren’t you worried that the Opposition will point out that you have always been an advocate of spending on primary education as opposed to ‘elitist’ education needs?
Not really. You see, we have done away with discretion at every level. We have brought transparency. Everybody is allowed to apply and projects are selected on the basis of its merit. The PM’s scholarship will give a stipend of `1 lakh a month to the best of the best — say 500 top researchers of the country — because we don’t want them to leave. There are three reasons why they leave the country — they want the best research infrastructure, the best scholarships, and freedom, which they get abroad. The best guides too. We will give them all that and allow them to go abroad and access the best labs in the world for one year, during their research. So, the whole research will be done in India except for that one year, and this will be a very new experiment for us.

At this point, Donald Trump’s policies notwithstanding, I don’t see too many students clamouring to study domestically, if they have the option of going abroad. How do we fix that?
I’m right now concerned about our best brains going abroad. I’m not talking about those average students who are going abroad to do a BSc. I have nothing to say about that because it’s their money, their choice. That doesn’t really make much of a difference in their life except maybe it is more exciting. Now, our priority is to keep our best brains here. That is why HEFA (Higher Education Financing Authority) has been created. Canara Bank is the provider and the initial budget is `1000 crore and this will increase to `2000 crore eventually. In the next two to three years, we will leverage `20,000 crore through market instruments and that will be put into various institutes so that they can create and update research infrastructure. That will make all the difference in the long run.