This school in Kerala used graffiti to spice up their walls and artist Orijit Sen loved it. Here's why

Learning will be unexciting if it's happening in drab surroundings. The belief that a child learns better in whitewashed classrooms and a terrifying environment is fast changing. Kerala schools have tried to infuse fun and colours on school walls to make a point that learning is about understanding new things in a fun-filled environment.

Every new academic season is a time when eye-catching graffiti on school walls becomes a talking point. This time a small Upper Primary School in Pilicode in Kasargod district grabbed the eyeballs for its grand 'train and aeroplane' theme on its walls. Graphic novelist and artist Orijit Sen was so impressed with the artwork and he wrote 'What Fun!' as he shared the pics on his Facebook wall.

The idea was to draw something that would make the young kids happy. I never expected the drawings to come out so beautifully or become popular

Sajeesh Vengara, the artist who made the graffiti, says the popularity he got for his work was unexpected. "I never thought it would become such a sensation. I did the whole graffiti in less than one and a half days," he says. The idea came from the outgoing headmaster Raveendran P V. "He wanted me to draw a metro train. But, I said metro trains lack detail on their surface and said an old steam engine train would be the best. It also has a nostalgic feel to it." 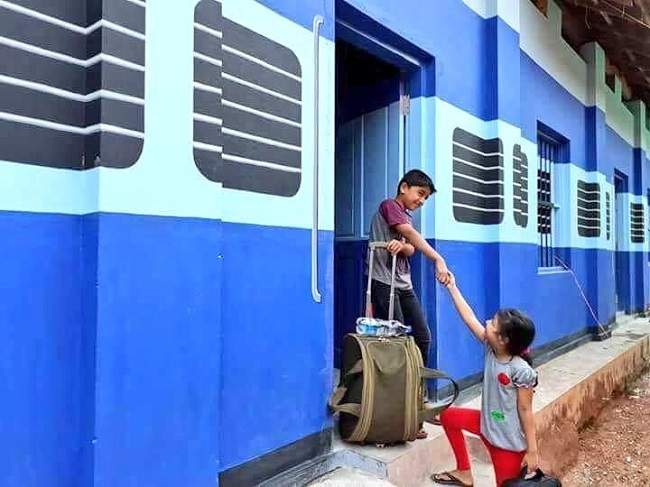 Colourful Learning: The children were overjoyed to find the painted walls in their classrooms

"The idea was to draw something that would make the young kids happy. I never expected the drawings to come out so beautifully or become popular," says Raveendran.

He says the kids were most excited with the graffiti with many posing for selfies in front of their 'train classrooms'.