Jane of the Jungle: At 72, Diana Beresford-Kroeger still goes from continent to continent hunting for old trees. Here's why

On the first day of college we usually meet new people, but not Diana Beresford-Kroeger. On her first day at University College Cork, Ireland Diana met a “remarkable” tree. “It was the staghorn sumac, a member of the cashew family,” reminisces the 72-year-old scientist, conservationist and author. And thus began her love for forests — a love that still grows as she maintains a 60-hectare forest outside Ottawa, Canada, where she lives.

Combining the ancient knowledge of trees with western scientific know-how, this saviour of trees is now out with a documentary, Call of the Forest, where she dwells on the forests of the Northern Hemisphere like the sugi and cedar forests of Japan, and the walnut and redwood trees of North America. We talk to her about meeting renowned botanist, Akira Miyawaki and why she believes that we’re all connected.

Going back to the start, when did this lifetime passion for trees begin? Do you remember the first time you realised your calling?

When I was a very young child, a few years old, there was an arboretum of mostly Mediterranean trees outside our house. These trees woke me up during the night. Their branches formed a moving tableau on my bedroom wall. The trees seemed to speak to me during my dreams.

On the first day of attending university in Ireland, I met a remarkable tree. I could draw this tree today, it is so vivid in my memory. It was a sumac, the staghorn sumac, a member of the cashew family. That was the beginning of my love for the forests of the planet.

Redeem and replant the native forests to harmonise the skies and the life of the seas. Outlaw war, and marry peace. Learn how to pray, then meditate. It is good for the soul. Respect, respect, respect

The documentary took five years to be made. Did you at any point feel like giving up? What challenges did you face and what made you resilient?

I never felt like giving up in the long five years of making this documentary. I firmly believe in my heart that I was doing this film as a vital message to all the young people of the planet. I feel that they are like the very breath I take, they are so precious. They must have hope. If I give them hope, then we can all work together.

I was sick twice during filming, once with food poisoning and the other with a bad flu. I used a bit more makeup to cover my fever and I leaned against something strong to get by.

Being an orphan as a young child and knowing what it is to be very hungry made me resilient. I was sending out that message under the radar, that I was an ordinary woman doing something for everyone.

How was the experience of meeting renowned personalities like Akira Miyawaki? What was your biggest takeaway from them?

An extraordinary thing happened when I met Akira Miyawaki. It was early morning in Japan. The crew was setting up. Akira and I sat on a garden bench. He put his hand out and caught my hand in his and said to me, “I am no longer alone!” We both sat there holding hands, filled with the joy of finding one another in our passion for trees and forests. You see, both of us were no longer alone.

In Diana’s opinion, when it comes to climate change, politicians and bureaucrats must put their egos aside and get down to work to prevent mayhem in the future

What keeps us all connected?

There is a 2,000-year-old ancient Celtic cure for sweating using a special type of wood. In Canada, there were sweat lodges that are still in use. In India, there is the funeral system of  cremating the body to ashes. The wood used in these three countries produce the same or similar aerosols that protect the human body. We are, indeed, all connected by knowledge.

India has known the importance of trees. Which secrets about the Indian forests does the world need to know?

The contours of the Indian continent beg a special biodiversity from nature. Its diverse ecosystems provide the backdrop for an enormous potential for hybrid vigour within plant DNA. This means that the ancient medicines of India can still hold some surprises for the modern world.

The forests of India of mahogany and teak of the verbena family are some of the most important trees on the planet to stop climate change. They drain the carbon dioxide out of the atmosphere and plug it into valuable wood like no other trees in nature. Then there are the fig species, the wonderful and sacred banyon trees of the mulberry family that cool the ground to save water, which is so precious in a hot climate. Down at the toenails of the continent are the mangrove swamps who enfold fish, soil, and protect the people from tsunamis.

Filming days: Diana with the crew of her film

What has been the most memorable feedback to the documentary?

People cry. They did not know that there were some simple answers out there. The film touches their hearts like deep meditation. You see, we are all the same.

What are some major differences you see around yourself with regards to people/companies making more eco-friendly choices? Could you give us a few instances?

First of all, let me deal with people here in North America. They are looking for clean food. That is the first step, then clean energy. This shifts the buying patterns for companies who are paying attention to different public demands. This is a slow process because the political systems have been stalled by game playing. The Church of the Holy Dollar is alive and well. This will change, too.

In the meantime, eco-friendly choices are on the table for many people and so the river of humanity must make the best choice in the end…or, it will be the end.

I think outside the box. Courage is an essential component of my life. I say that I carry my courage in my suitcase. My courage is for you, too

What do you have to say about the US pulling back from the Paris Accord and on the other hand some Fortune 500 companies signing their own pact? Will US pulling out really make a difference? - What does this say about the mindset, when it comes to climate change, of politicians and bureaucrats?

In my opinion, when it comes to climate change, politicians and bureaucrats must put their “ego away on an altar,” and get down to work. If they don’t, then the people power will take over. And this process may not be pretty, especially in the face of famine and rising water.

What unique suggestions would you offer students who are trying to make a difference in their own way like establishing an environmental club? What would our advice be for them?

Half of humanity has moved into the concrete kingdom of the city. They have left the song of the soil behind. In the western world, as our lifespans lengthen, so does the age gap between grandchild, parent and grandparent. This vital gap of knowledge transfer from the old to the young must be bridged. A knowledge of survival for all races and creeds is the safety net for mankind. The environment is just one item in the mixture. We are at a crossroads of decision-making for each human heart. I have no doubt that we will make the world a better place for the future. 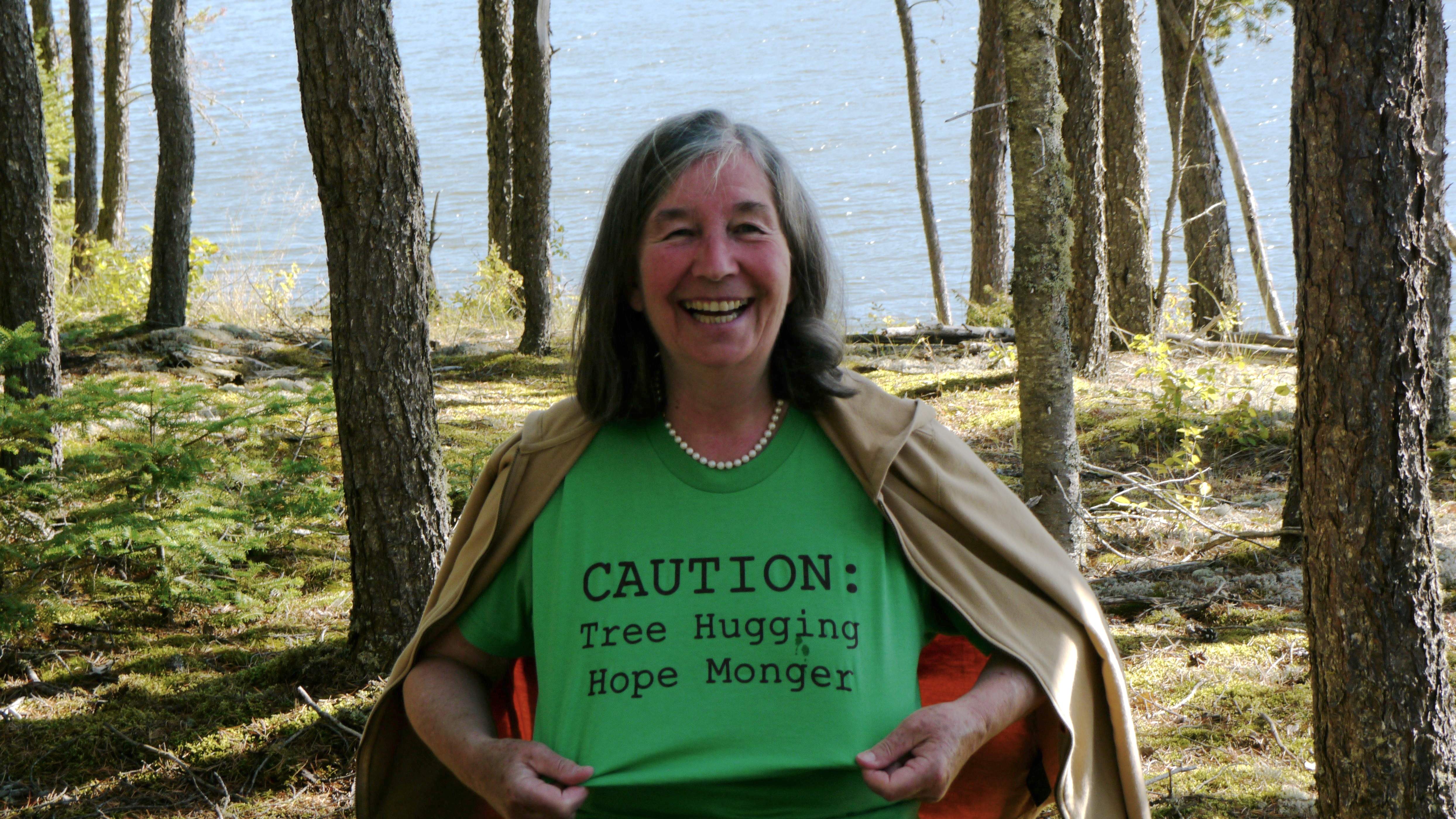 About the people of North America, Diana says that they are looking for clean food. That’s the first step before clean energy

What would be your call to action to the youth across the world, in one sentence?

Take a breath, plant a tree, and be rich in what you do not want.

We believe that in your upcoming book, The Celtic Connection, you've spoken about how Ayurvedic and Sanskrit worlds in India speak about how the life has spirit and soul who give thanks to creatures who kill them for food. Can you tell us a little more about it with regards to India?

The Celtic culture believed in the triad of body, mind and soul. In addition, everything else in life and nature carried an anam, or soul, even the trees or mountains. This placed a sacred status on the web of life itself. Every day was a blessing. Part of that blessing was food. Gratitude for the source of food was never forgotten before or after a meal. This gratitude was sent to God, or Dia, whose origins came from the mystical realm of zero, and then one, or unity. India reflects these ideas. The world should be grateful for this invisible power of the spirit going forward.