Shashi Tharoor decided to write a foreword for the book of a woman he had never met before, Radha Venuprasad, and launch it. Here's why

Primarily stories that deal with characters she has seen from the Nair community in Kerala, Shifting Sands promises to be provocative and intimate without being overtly raunchy

We all say it's better late than never. That's clearly what Radha Venuprasad's story tells us. With a mind full of tales to narrate, this author has penned her first book at 68. Titled Shifting Sands, it observes and examines human relationships and dynamics. The book will be launched by Shashi Tharoor in Chennai on July 7. Incidentally, the Thiruvananthapuram MP has also written a foreword to the book, despite not having known Radha or her family before they reached out to him..

As we caught up with the author, she had a lot to share about love, history and relationships.

In his forward, Shashi Tharoor defines your book as a ‘reflection of our society and of the never-ending clash between the modern and the traditional.’ How did he come to recognise your work?

I was reading Shashi Tharoor’s The Era of Darkness and at the time I was trying to get the book published. So I wrote to him with a synopsis of my book and the name of the family I come from. He really touched my life when he said that he would like to write a foreword for the book. Later, he read the whole manuscript and sent back this extremely touching foreword. He is unable to come to the book release, but will be present through video. How much has your writing been influenced by where you come from and the culture you grew up in? It is a book about that deals a lot with the Nairs, after all.

I come from a slightly upper-than-middle class family, we trace our ancestry to the Maharajas of Travancore. Although I moved away, most of my stories have to do with the Nair community in Kerala. It was a very feudal system, but somehow the women were able to hold on to their voice. A lot of the stories have to do with dynamics within that system.

I was never an archetypical ‘good girl’. As a child, I would question things which have made a lot of people uncomfortable. My grandfather was very modern, he would tell us that girls had to be equal to boys, if not more

There is a streak of rebellion in your stories. Did it evolve over time?

I was never an archetypal ‘good girl’. As a child, I would question things which have made a lot of people uncomfortable. My grandfather was very modern, he would tell us that girls had to be equal to boys, if not more. My tendency to think outside of the ordinary has always been there, which is probably why my father got me married at a very young age because an astrologer told him to.

What is it that finally drew you to writing this book?

I have always written. But everything would be scattered across different notebooks and diaries. Organised writing started only a year ago. My husband and sons have been my greatest strength. They gave me space and the environment that I needed to write this book. I think that supportive family and friends were the greatest push I had. At the age of 68, they were able to recognise my talent and push me to get it published. People love a good story. My hope is that I have weaved something entirely different, parts of which may not conform to what people are used to.After my very sheltered childhood, marriage opened me up to the world as it really was. 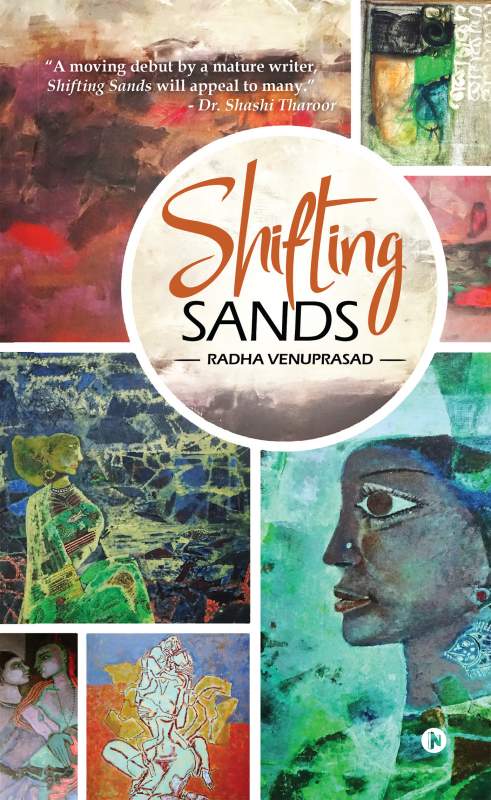 Different tales: Shifting Sands will be released on July 7

Shifting Sands deals with people and relationships. Is this a personal observation?

I always observe things. I’ve always been very inquisitive. I would always read all the newspaper or magazines that would come my way. Since I can remember, I would always wonder about relationships, how different kinds of people would come together and the different paths their lives take.

Is there a history to the stories you have written about? Is it from experience or observation?

There is a history to everything. A lot of the themes may have been sparked by gossip I have heard while growing up, but it’s not about anyone’s life. When I first sent them my stories, some people were shocked. Maybe it’s the realistic way in which I write that makes people think that it has actually happened. I do not feel the need to copy from somebody else’s story, I have created and told my own story.

This book deals with topics like homosexuality and mental illness which certain writers have demonised in the past. How did you manage to deal with it respectfully?

I believe that we should have the same options with sexuality as we do with food. It’s a personal choice. The gay character in one of my stories goes through an ordeal, he is just a person. There is no need to deal with such characters differently. Are you afraid that people will be shocked by the themes you have written about when the book comes out?

Why should I be afraid? Different people will react in different ways to the book, I expect various reactions and perceptions. Maybe it’s my age. Twenty years ago, I might not have had the courage to tell these stories. People would have assumed that there was some inkling of sexual (frustration) behind it. But I am a grandmother now and I am no longer afraid of such things.