India’s budding karate champion, M P Jagruth who made the country proud at the World Karate Cup, is already gearing up for the 2024 Olympics

With his strength and agility, M P Jagruth scripted history as the first karateka (practitioner of karate) to win two medals — a gold and a silver, at the 10th World Karate Cup 2017 held in Croatia recently. The 12-year-old outperformed representatives from over 40 countries at the event that was organised by the World Karate Federation from June 26 to July 2.

Jagruth was introduced to karate at the age of 6. “I saw my father practising karate. He had represented India in many international championships and likewise, I started practising karate too,” says the Bengaluru-born, who won a gold medal in the Kata Male (solo event) and a silver in the Kumite (freestyle fight). “This is the first ever gold medal for India in the World Karate Championship,” says M G Prasad, Jagruth’s father and coach, who calls his son a keen learner.

When asked how he juggles both studies and training, Jagruth says, “Studies and sports are equally important in my life. First, I make a schedule which is convenient and easy to follow. I allot one hour in the early morning and two hours in the evening for sports and the rest of the time I dedicate to my studies. When I have exams, I focus more on studies.” 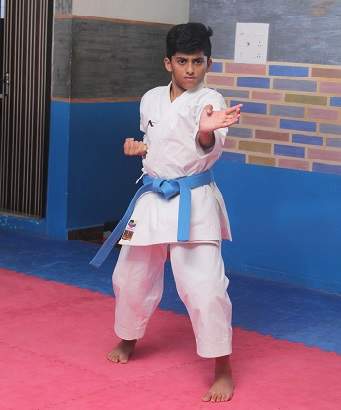 BORN TO FIGHT: Jagruth during his training session

Explaining the strenuous training Jagruth goes through, Prasad says, “His training consists of both sports training and karate skill training. He practises for three hours daily on weekdays and close to five hours on weekends. His commitment and enthusiasm make him excel in the field. There is also support from his friends and teachers who help him with his studies when he travels for international tournaments.”

However, Jagruth’s journey has been tough. His parents have shouldered the responsibility of arranging money for international tournaments. Unfortunately, like most sports, karate is experiencing a shortfall in funding which is much needed to meet the international standards. “When we aim for international, it is needless to say that we require international facilities. For this, we are finding it difficult to meet the expenses of advanced training (preferably abroad), training materials and coach expenditures,” says Prasad, who is a master trainer at Zen Sports and Fitness.

Jagruth has participated in more than 50 karate championships in both categories all over India and abroad too. He has been the State Champion for five consecutive years in the Karnataka Sub-Junior Karate Championship

Jagruth believes that karate is not as loved as other sports like cricket and hockey, and he would like to popularise this form of martial arts in India. “As I grow old, I want to concentrate on increasing the number of karateka in India. I would like to bring the Indian students on par with the Japanese,” he says, proudly. Jagruth says that his passion for karate was inspired by a number of movies, Jaden Smith’s The Karate Kid being one of them.