They were trolled, threatened and even bullied. But they don't seem to care as long as their social media posts are reaching the right people

The force, that social media is, has once again ridiculed a misogynist comment by a politician. This time it was the Vice-President of Haryana BJP asking a woman to stay inside at night if she doesn't want to be attacked or molested.

Clearly, his comment didn't go well with the women on social media and they resonated with creativity. #Aintnocinderella was the choice of weapon this time and Twitter and FB were flooded with women posting photos of them enjoying outside of their homes at night.

While this is another war played on social media, we wonder if it will make an impact? Are the politicians listening? Are the posts by these women getting any positive response? Let's hear it from these women who are clapping back at the sexism this society is engulfed into.

23-year-old Aprajita Madhu Vidyarthi has been travelling solo, across the country. And she doesn't see why women should be asked to stay at home at night.

"My constitution does not expect me to stay at home. It is the duty of the government to provide me safety. That's part of the reason we pay the taxes right. By asking me to stay at home, you are trying to hide your inability to provide me with a safe environment. It is too much to ask for?" she asks. Apparently yes! "The reactions I got for my post range from being violent to "well-wishers" advising me to take down the post and understand the limitations of being a woman," she explains.

Palak Sharma, a journalist, who was one of the first people to take this campaign forward holds her ground too. She hopes that post can bring in some political intervention. "I hope and wish that there is a positive political impact of this campaign as our leaders are our strength. They are the policy makers and if they don't support women, we cannot expect the common man to either."

But haters gonna hate and Palak understands that. However, she refused to budge. "Targeting people for posting a tweet or picture will not weaken those who have chosen to stand up," she says. Pooja Rathan from Bengaluru, another woman who'd put up a picture of hers with the hashtag is happy to see the message getting shared widely. "It's wonderful to see women in India starting to take a strong stand on what is rightfully ours. I'm hopeful it will be a step in the right direction and push our political leaders to be more conscious about their approach on sensitive issues like these," says Pooja who firmly believes that victim blaming has to come to an end at the earliest.

Trolls didn't leave her alone either. But she doesn't seem to care. "I've definitely also had a lot of negative backlashes. It isn't going to stop me though. There will always be haters. I will always voice my opinion and fight for my rights," she says.

Here, have a look at her "I don't care what you think swag" post 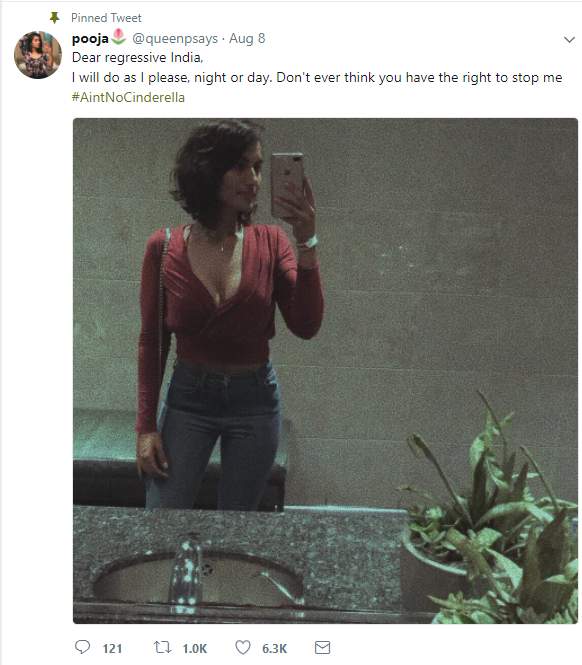