Meet Saji Valassery, the man who's training kids and people with disabilities in Kerala to swim in turbulent rivers, without charging a cent

This swimming coach doesn't have national swimming credentials, a large ego or a swimming pool that he promotes. He's teaching kids to swim against the tide in the rivers of Kerala and it's free

It's the first day of swimming lessons for sisters Angel (5) and Anna (8) under coach Saji . As Anna steps into the river, her father in tow, Saji lowers himself into the water and says, "Now, let's play Superman." He gently raises Anna and brings her body parallel to the water with her arms thrown forward in the 'Superman' pose and then gives her a mild nudge forward. Elated at drifting in the water for the first time, she stands up and waves proudly at her sister on the bank. Saji passes an encouraging smile and says, "You have become a swimmer now. All that remains is getting better at it."

This is what the average day at the summer swimming camp by Saji at the Periyar river in Aluva, nearly 20 from Kochi, looks like. More than 300 students, aged 3-15, learn the basics of swimming from Saji for the two-month long camp. The reason parents make a beeline to train their kids under this man who runs a small business in Aluva town, is because he has coached the unlikeliest endurance swimmers, including a one-handed man, a visually challenged boy and a girl with neurological ailments. And he does it all free of cost.

Saji's first students were his own kids, Merin and Jerin. Back in 2011, when the kids turned nine and fifteen respectively, they swam across the widest part of the Aluva river, a 650 stretch, in 22 minutes. People started taking note of their coach. "There had been many instances of kids drowning and that made me very uncomfortable. That's when I decided to train my kids in endurance swimming. After my kids' feats drew attention, I decided to train more children," he says. 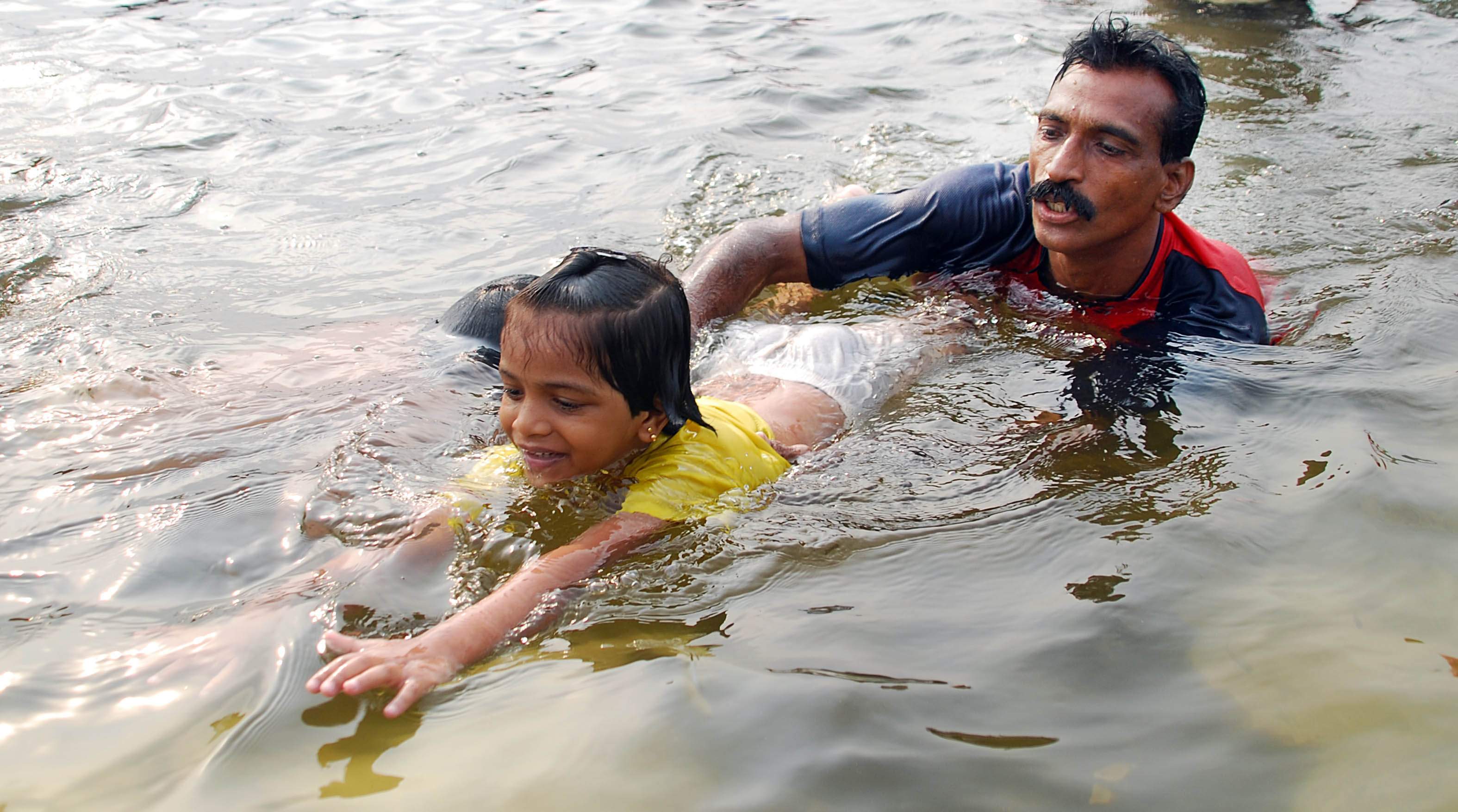 The next year, 11 kids who trained under Saji swam the same stretch. In 2013, the number of students who undertook the swimming challenge rose to 38, and this time the youngest in the bunch was 7-year-old Shervin Ajay. In the following years, the numbers rose to 76 and 75. Most of these feats were achieved during strong undercurrents and turbulent weather — a testament to the fact that these kids could swim against the tide. Literally.

May the power be with you

Saji believes taming the currents and being an expert swimmer empowers a person.This lies at the heart of his resolve to make more swimmers out of the people around him. Physical handicaps, he says, should never hold anyone back from venturing into the water.

Four years into training, the parents of Krishna, a 7-year old girl with neurological ailments, approached Saji in a last ditch attempt to help. A physiotherapist had suggested that Krishna  swimming as a way to strengthen her body muscles. Saji trained her for little over 50 days and the girl covered 200 meters in 25 minutes. A great achievement, considering Krishna could barely walk

In 2015, a sprightly youngster named Navaneeth approached Saji for training. He was blind. And yet, Navaneeth was not going to let his blindness stop him from doing anything. "Training him was tough as you can't give him visual cues and he kept wandering off from the set path. I swam in front and shouted directions. But, he was exceptional as even with the handicap he swam the stretch in 12 minutes," says a visibly proud Saji. The coach wanted Navaneeth to swim across the Vembanad lake, but being busy with cricket, he has put it on the back burner.

More recently, Radhakrishnan, a government clerk with a deformed right hand, surprised even Saji with his grit and strength of will. "Radhakrishnan had accompanied someone to my classes. He approached me one day and said he wants to swim. I was skeptical as adults are tougher to train as they are easily overcome by fear. Moreover, he had just one hand. I said a reluctant yes hoping he would be discouraged by it. But, from the next day he was here as early as 5.30 am." Radhakrishnan, a clerk at the Tehsildar's office, completed the feat with his superiors including the district collector and sub collector of Ernakulam as witnesses.

Swimming in his trunks... and genes

Saji attributes his swimming skills to his father, V Thomas Mani. "He was with the British Indian Army and had won the Madras Swimming Championship in 1946. He was my trainer." Even though an expert swimmer and an accomplished coach, Saji, however, has not participated in any swimming competitions. "I swam for fun and it did not occur to me to join championships."

What plans going forward? "I want to make as many people as I can  swim. That's my goal." Sounds like he means it, as he does all the coaching free of cost.