I just didn't want to do anything stupid on TV because my kids were watching, says the only cooking teacher to win MasterChef: The Professionals, Gary Maclean

Popular culinary competition winner Gary Maclean and his mentor Willie McCurrach were at MDIS, Singapore to inaugurate their Bakery and Culinary Studio

We arrive in Singapore, met with an overcast sky — gloomy and grey. And as the gloom gave way to rain, Gary Maclean, last year's winner of UK’s MasterChef: The Professionals, inaugurated the Management Development Institute of Singapore's Bakery and Culinary Studio.

When we sit down to chat with Gary Maclean and his mentor Willie McCurrach, they seem to like the space as much as we do, especially the 45-year-old MasterChef winner. "It isn't enough for students to just pass out of college; they have to work," he says, adding that this is applicable vice versa as well, "Aspiring chefs can't just start working; they have to attain a formal education first." He explains that this understanding is what marks the difference between chefs now and chefs back then. "We went to college just to get a job, they go to college to qualify and get better jobs," he remarks, establishing how the means (education) to the end (job) has finally earned its importance, to which the curriculum head of the City of Glasgow College, McCurrach agrees. 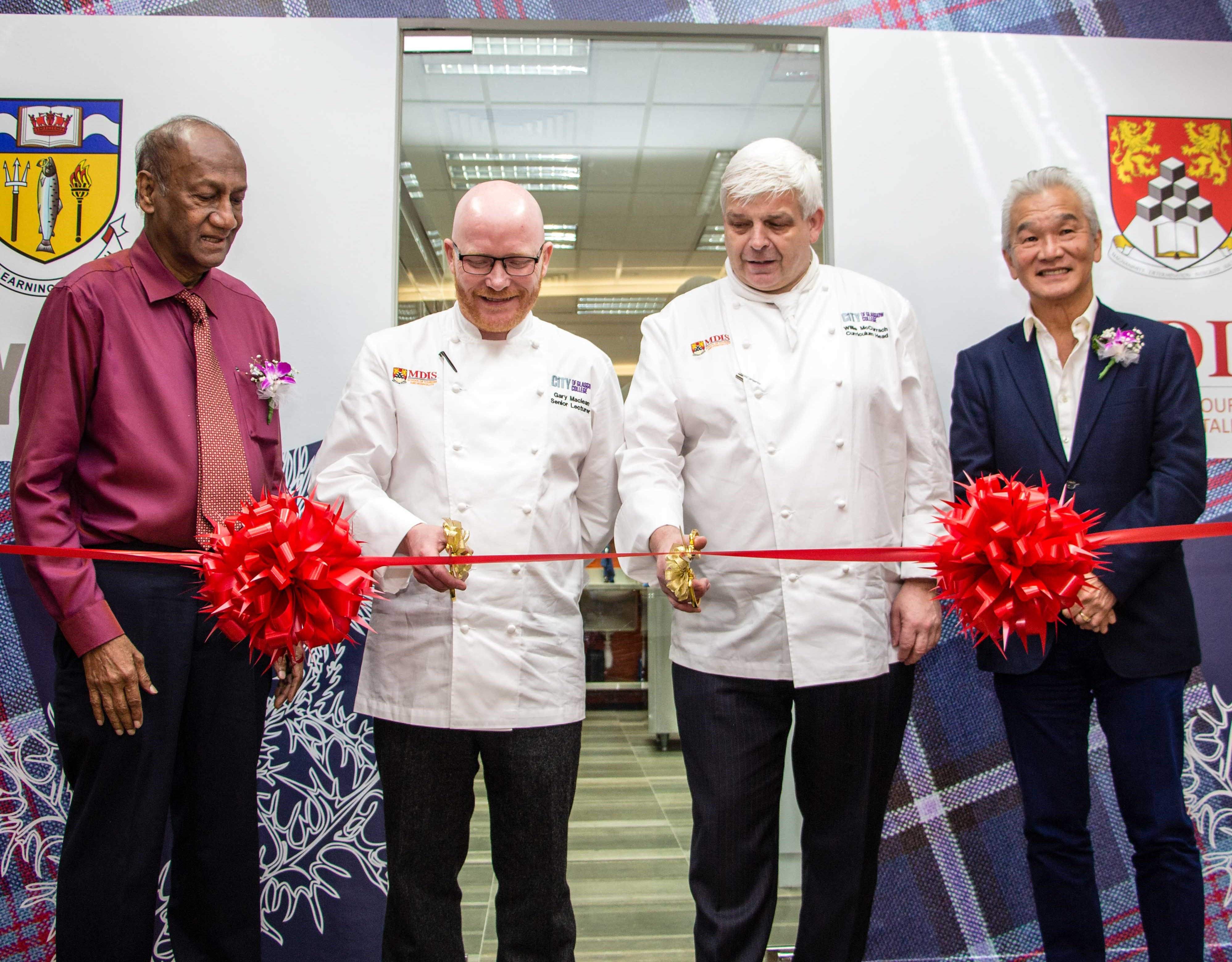 Incidentally, the bakery will be run by students, à la their café Brew & Bites, making practical knowledge purely hands-on. We walked into th 2000 sq ft studio, and look at its well eqipped facilities like eight cooking stations, including two combi ovens, understanding that it's time that practical work and theory go hand-in-hand across disciplines, including the culinary arts.

Gary also adds how "we were training to get a job with an employer and stayed on with them. Now, students prefer to change jobs quickly as it is so easy to get one." So, is that what makes one a master chef? Qualification? Multiple work experiences? Gary opines that the love of cooking and hard work also play a major role, while McCurrach, who has been in catering education for 39 years, adds skills to the list.

Chef speak: Maclean says that though it is thought that there is a shortage of chefs in the UK, it isn't so. Educators just have to sharpen their minds. Also, at the moment, Maclean is comfortable being known as a lecturer, but he, fundamentally, still remains a chef, he says

Understandably in a conversation with Gary Maclean, MasterChef questions are unavoidable. So, we let curiosity get the better of us and ask him the difference between watching the edited version of the reality show, which was the catalyst to his fame, to actually experiencing the show. "When you are there, primarily, it is a culinary competition. But once the edits come on, it becomes a programme," says Maclean, agreeing that the edits do make the show exciting.

But, when he was there, living the experience, it was all about survival. "I never went into the competition thinking that I will win it, I went only to survive and to make sure that I don't do anything stupid as my kids would be watching," says the grounded father of five. He presented himself in a way that they would be proud of, and indeed they are! He adds that being a lecturer gave him the advantage of knowing how to talk and cook at the same time.

A very important prerequisite to being a chef is skills. You also have to understand the ingredients you are working with

At this moment McCurrach pipes in, adding that this is the first time a lecturer has won MasterChef. So, what has been Gary’s motivation to teach at the City of Glasgow College for the past 17 years? "I’m in a place where I want to share all the knowledge I have acquired. I love teaching," he states frankly. He takes us back to the time when his career began under Willie McCurrach, who had invited him to take classes initially. "I was teaching for 13 years while being a chef too. It was only seven years ago that I turned into a full-time teacher. I think it took me 13 years to learn how to teach," he ruminates, as his mentor reminds him, "You were also managing two jobs!" Currently, Gary delivers the practical and theory classes of a diploma course — HND (Higher National Diploma) in Professional Cookery.

Food soon becomes the centre of our conversation, and not just because the lunch hour was almost upon us. Coming from Glasgow, which has more Indian restaurants than Scottish ones, Gary tells us that Indian cuisine is huge all over the world. He also added that he eats more Asian food than he cooks. Willie also touches upon how being a chef is now a prestigious job when compared to when he started, thanks to TV and the popularity of travel. 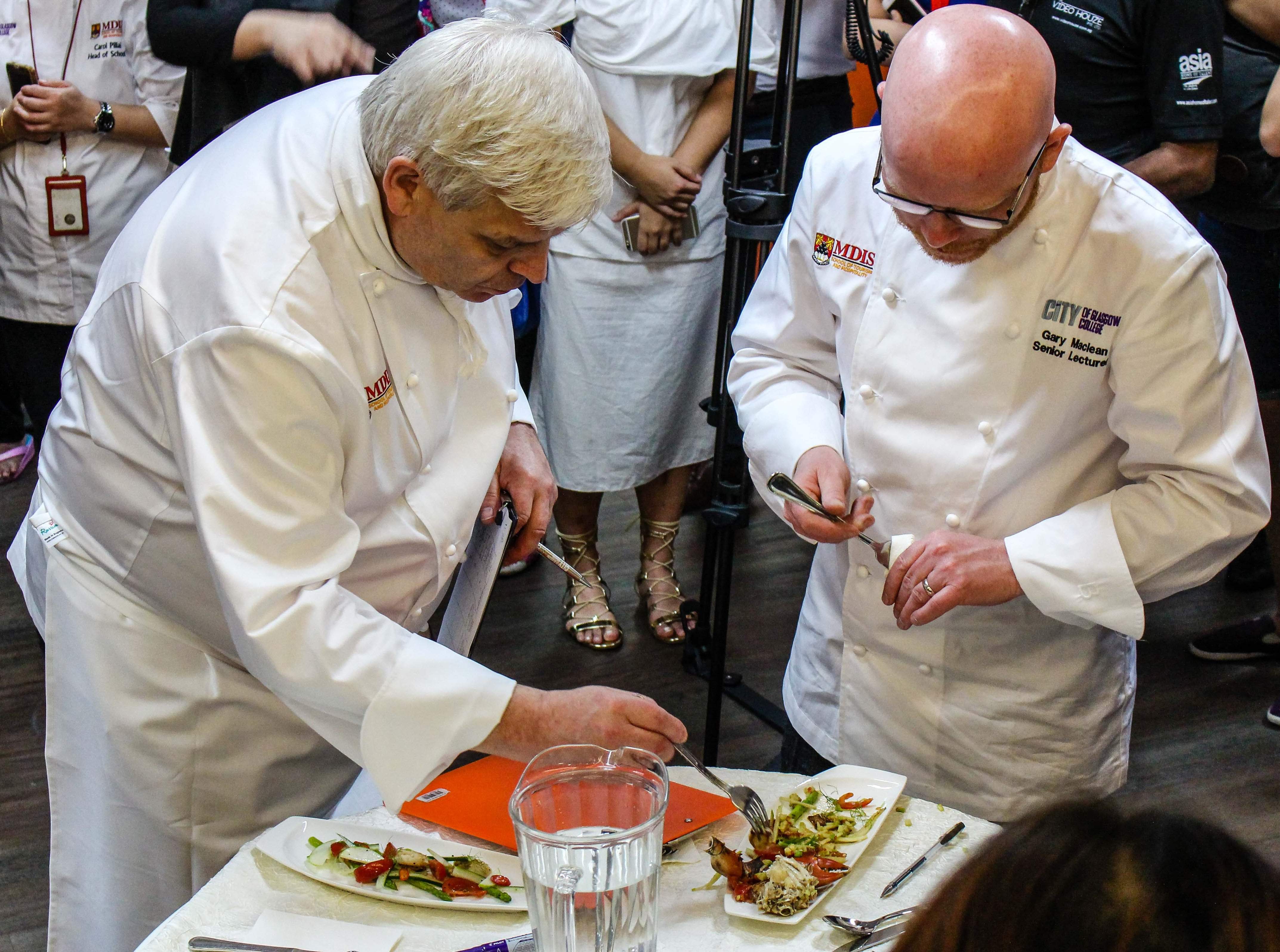 Before parting ways, Gary leaves us with some food for thought when we ask him if he’d rather cook or eat all his life. He cleverly replies, "Cook, of course, because then I can eat as well," to which McCurrach laughs heartily. He continues, "I like to cook with local ingredients. I think we should stop flying fresh foods from other countries. We should eat local and support the economy of where you live." Taking a cue from this, I give my regular breakfast of cornflakes a miss and opt for a medu vada instead!