Add this: Kerala blogger asks State to pay tenth graders 1 lakh each for having to retake Maths exam, because it's unnecessary pressure

Hashim Colomban has said that his ask of 1 lakh each for the 4 lakh kids who wrote their boards is actually too low, but that he settled for it to be 'fair' about the whole thing

Tenth-grade school students all across Kerala are going to be praying that a blogger from Malappuram wins an appeal at the SHRC just as much as they pass, when they retake their Maths exam on Thursday! A blogger in Kerala has approached the State Human Rights Commission (SHRC) demanding a compensation of Rs 1 Lakh each for the students who will be retaking their SSLC Maths paper on March 30.

Hang on. Why are they making tenth standard students rewrite an exam, a Maths paper at that? Because there was a complaint that 13 out of 22 questions from the model exam paper, conducted by a private agency, were repeated in the main exam.

Hashim Colomban, a blogger from Malappuram, approached the SHRC with his demand as he believed that the rights of the students and their parents have been violated by their decision to hold the Mathematics exam once again. His complaint to the SHRC, which it has scheduled for consideration, lists five main points.

1. Department of Education has inflicted the students with increased pressure on account of the re-examination

2. Students might have returned or abandoned their study materials in the belief that the exam is over. They will be insecure now.

3. The parents will have to spend extra time, effort and money for the reexamination.

4. Many would have had to cancel their vacation trips which might have been booked months ago. Parents who live outside the country might have booked tickets and arranged visa, which they have to cancel on account of the re-examination.

5. Students would lose confidence in institutions like the Department of Education and can lead to the formation of a casual approach toward it.

Hashim admits that while people might feel the Rs 1 lakh ask is a little too steep, he believes that it is the least that can be done, "I think students should be compensated more than one lakh rupees. I settled on such a high amount as people will know the gravity of something only if it is shown to them in terms of money," he reasons.

Incidentally, the blogger, who blogs at kooothara.blogspot.in, is no novice when it comes to crusading for human rights. He had earlier taken on the programme 'Kuttipattalam' on Surya TV as it portrayed young kids as 'buffoons'. "I complained to the Child Rights Commission and they took it up. The programme was served a notice and the channel took it down," he adds with pride.

As they take the exam tomorrow, close to 4 lakh teens in Kerala will now be hoping that Hashim receives a favorable verdict — their vacation will be one bumper ride. 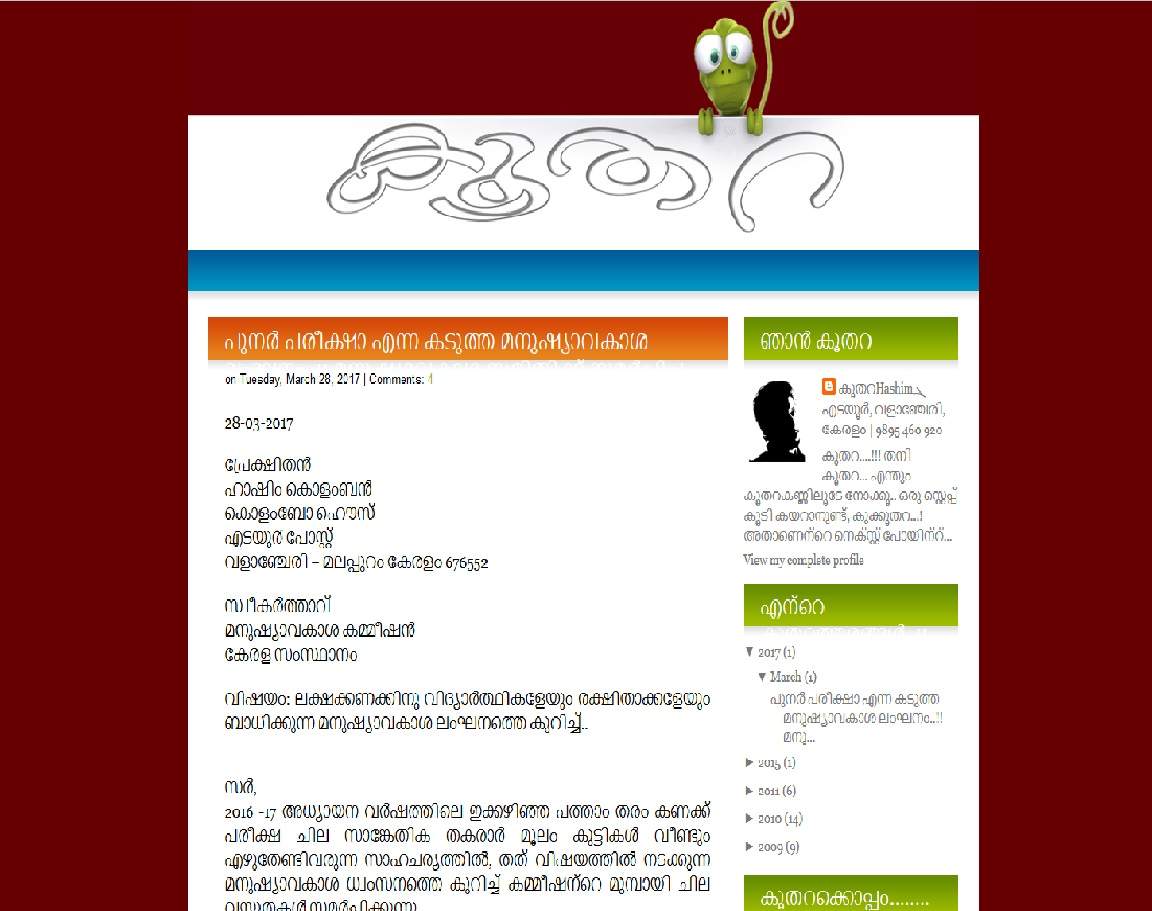 This comes at a time when the entire state is debating the serious lapses on the part of the Education Department in holding SSLC and Senior Secondary Examinations.

One could loan the phrase 'monumental mismanagement' from India's ex-prime minister to refer to the conduct of board exams in Kerala this year. It started when it was found that almost 13 questions out of 22 in Mathematics question paper for the SSLC examination held on March 20 had appeared in the model question paper prepared by a private agency. Many people alleged the questions have been leaked. Following an inquiry, the Education Department decided to re-conduct the examination on March 30.

- It was found that many questions in the Plus One Geography examination held on March 21 had repeat questions from model exams. These questions carried 43 marks out of the total 60.

- The latest in the series of lapses, which happened on March 28, had comic relief written all over it — a Malayalam language paper was delivered with English questions printed on it. Take that!