Dear Mr Ashokamitran, I wish we'd done that interview sooner: A reporter's account of her tryst with the writer during his last days

The reporter talks about her incomplete interview with one of the most prominent doyens of Tamil literature, Ashokamitran.

Sensible, kind and extremely understanding that I did not understand Tamil nor that I hadn't read his work, Ashokamitran was one of those rare authors who didn't have an ego when it came to interviews.

It was 10.30 pm on a Thursday. March 23, 2017. I was working towards turning in after what had been a series of long days when a notification from a news app popped up on my phone. 'Ashokamitran dies at age 85'.
It was a devastating reminder of how short and fragile life is.

I felt bad. Not simply because a celebrated author had passed on, but because I had been expecting his call. Any day then.
I had been going back and forth with him about doing an interview and we had finally agreed that we'd get down to it sometime this week. In fact, he'd promised to look over the questions I'd sent him by mail and try and respond when he found the time.

I guess I'll never get to do that interview now.

I didn’t know much about Ashokamitran, the writer, nor was I familiar with his work until I read an interview with him that had been published in The Hindu recently. I started reading up about him and his work — how he'd moved to Chennai at 21, worked with producer SS Vasan and went on to write several award-winning books. I told my chief, not with too much confidence, that I'd like to interview him.

As someone who has pretty much spent all my life in Chandigarh, far removed from Tamil Nadu, Tamil literature and someone like Ashokamitran, it might have come across as a strange request. but I made it anyway. My editor was a tad skeptical given the language barrier (My mastery of Tamil is as good as my Mandarin - which is to say, non-existent), but he was pretty much okay with and asked me to 'figure it out'.

In case you're wondering why I wanted to do this interview, it's because after all the reading I'd done about him, I hadn't been able to find a single piece that wasn't obsessed with his writing. There simply wasn't anything about him as a person. Not that I could find or relate to anyway. So I decided beforehand that this was going to be all about him and not his books — most of which I couldn't read, anyway. The next task for me was finding out how to contact him and getting him to sit down for an interview. After a day or two, I managed to get his phone number with the help of one of my colleagues, who got it from another Tamil songwriter called Rajesh Malarvannan. I was pretty excited about talking to a person whom I had read so much about but never met.

On March 10, I called him for the first time. He picked up almost immediately and in a shaky voice asked me where I was calling from. When I explained that I was calling from The New Indian Express and why I wanted to do an interview, he asked curiously, "Why do you want to an interview with me? I just did one recently." I was a little nervous that he would ask me about his books, but I still tried talking him into it. After a while, he politely cut in and said “I have a family function to attend, can we do the interview after March 17 or 18.” I wasn’t happy but I had no choice. I said all right and decided to wait.

A couple of days later, March 14 to be exact, he sent me this text message: 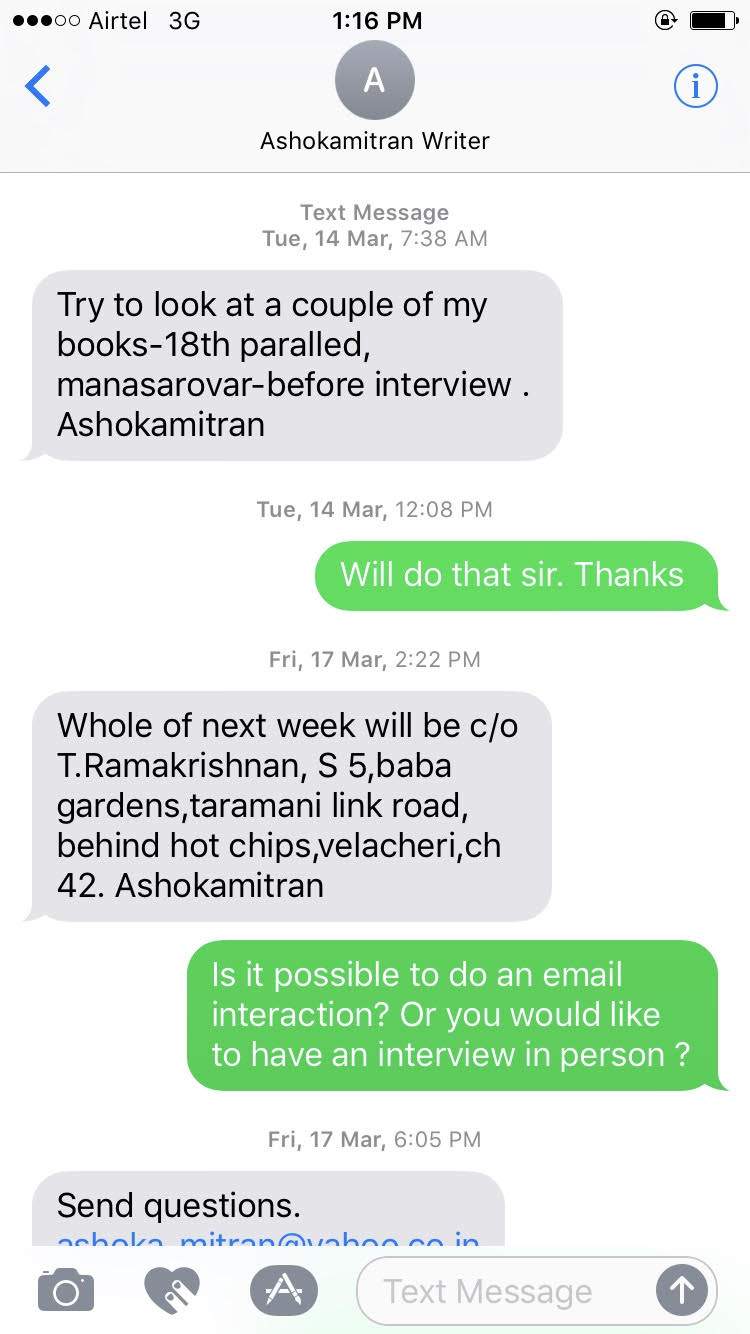 Screenshot of the conversation with Ashokamitran

Try to look at a couple of my books - 18th paralled, manasarovar - before interview. Ashokamitran

I didn't really know what to say, so I just texted back 'Ok, will do that sir'. I figured it was a safe enough response. Screenshot of the conversation with Ashokamitran

Come tomorrow for the interview

As it was a production day in office I knew I couldn't make it there. I quickly texted back asking if he'd prefer to do this through mail instead of in person. I didn't get a reply for a while, so I called him and asked him the same thing.

He asked me why I couldn't come and I explained. I was a little worried that he would blow me off but after a short pause he said, "All right, I'll mail the answers." He even texted his mail ID across.

As I was not familiar with his work, I sent him a slew of questions concerning his personal life. I sat back and waited, curious about what those replies would entail. I figured it would be a good read because I had asked about things that no one else had seemed to — like which language he preferred writing in, why he felt writing didn't need a deeper inspiration, authors he had liked and read about for a sustained period of time and the rationale behind it. Maybe it wasn't the deepest of interviews, but it was what I wanted to ask him.

Two days later, Ashokamitran called. He sounded busy, a little harried even, but he told me that he had read through my questions, “You didn’t ask anything about the books I have written,” he asked with concern. He also wanted to know if this was going to be published in print or online, which I thought was incredibly insightful for someone his age. I gave him my well-rehearsed explanation and added that I didn’t know Tamil. I wondered if he would get mad at me and just hang up.

He didn't. In the nicest of tones, he exclaimed, “Oh, you don’t know Tamil?" before adding, "No problem. I will reply to your questions in two days.” I was psyched. It couldn't have gone better.

And I waited. Another production cycle came and went. I wondered when the next text that ended with that now-familiar postscript "Ashokamitran" would land in my inbox.

I know the answer now. Never. Like I said earlier, I was sad, possibly not for the same reasons as everyone else, but I was still sad.

I guess I'll always have to wonder how that interview would have gone.

(Ashokamitran died at age 85 in Chennai on Thursday evening. He is survived by his wife and three sons. His work includes over 200 short stories, eight novels, about 15 novellas besides prose. His short stories have been translated into English, Hindi, Malayalam, Telugu and other languages. Ashokamitran has won the Sahitya Akademi prize for 1996 for his collection of short stories, Appavin Snegidar)