The intent of H1B visas is not replacement of American workers?

Here is some potential good news for Indian techies working in the US! Asserting that replacement of American workers is not the intent of H-1B work visa, the Trump administration nominee for Labour Secretary has acknowledged the shortage of skilled workers in the US.
"Some Americans have seen jobs go overseas. Some Americans have seen jobs filled by foreign workers. Indeed, I've read reports that some Americans have been asked to train their foreign replacements," Alexander Acosta, the Labour Secretary nominee, told Senators during his confirmation hearing.
"And some Americans see that jobs are available, but these available jobs require skills that they do not have," reported The New Indian Express. 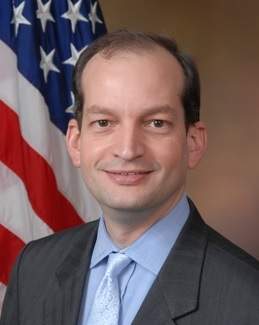 Responding to questions from Senators, Acosta said that it's important to look at the issue that he highlighted about foreign workers taking American jobs.
"Particularly, when, in those circumstances that I highlighted where Americans are being asked to train their foreign replacements. That is not the intent of the H-1B," Acosta said.
"So one question that I would have is, how often is that happening? Is that something that we should be looking at with greater degree of care? I think we also need to work with, public-private partnerships. I know that there is a lot of discussion about an infrastructure programme. An infrastructure programme will certainly bring back a lot of jobs," he said.
Acosta said for all of these, it's not just the jobs as part of an infrastructure programme or jobs that are developed for a small business but as individuals get jobs they spend money.
"Then those individuals that spend money go to restaurants. And you have this multiplier effect throughout the economy that I think is incredibly valuable," he added. According to him today many Americans are facing the same struggles his parents endured, only worse.

Not surprisingly, the students could not get a job when they graduate. We can and must work to reduce the skills gap. We need to make better efforts to align job training with the skills the market demands of its workers, especially as advancing technology changes the types of jobs available in our economy

"My parents had jobs; but not all Americans have jobs," he said, adding that helping Americans find good jobs, safe jobs, should not be a partisan issue. In his testimony, Acosta expressed concern over skill gap.
"As I visited with Members of this Committee, I repeatedly heard that in your states the jobs are there, but the skills too often are not. In one of your states, for example, a community college was teaching welding techniques that employers no longer used," he said.