That student reached out for help and you let him die. This system is dehumanised: Delhi HC raps Amity University for Law student's suicide

Lashing out at the education system in India and at Amity University in particular, the Delhi High Court condemned the varsity's action in debarring a student from writing his exams due to lack of attendance - something that led to his eventual suicide, "It (education system) is completely de-humanised. It is a machine. The human element has been completely taken out. The contact between teacher and student is perfunctory. There is no connect," a bench of Justices Siddharth Mridul and Najmi Waziri said.

The bench added, "Are we producing clones? We seem to be mass producing clones. It seems  individuality is frowned upon now. You must conform at all costs, else retribution is swift." The court made the oral observations while hearing a plea initiated by the Supreme Court in September last year on the suicide by a student of Amity Law University. The matter was transferred to the Delhi High Court in March. Sushant Rohilla, a third year law student of Amity had hung himself at his home here on August 10, 2016 after the university allegedly barred him from sitting for semester exams because he did not have the requisite attendance. He left behind a note saying he was a failure and did not wish to live

During the day's proceedings, the bench said there was perhaps an "element of callousness" in how the university handled the deceased student's "cry for help" before he took the extreme step. "The student reached out to you (Amity). He cried out for help. But did you respond? Perhaps there is an element of callousness in how you handled it," the court said. "Implement your rules, but do not put students at risk," the court told the varsity which claimed it was only strictly enforcing its attendance norms.

The court did not appear to be convinced by the claims of the varsity, which is affiliated to Guru Gobind Singh Indraprastha University (GGSIPU), and said there should be safeguards in place so that a person who wants assistance gets it immediately. It also said that this incident would have scarred the lives of the deceased's family, friends and batch mates. "It is a continuing trauma for them."

The amicus curiae appointed by the court said the status report filed by the Delhi Police regarding the incident was "shocking" as it said there was nothing in the complaint which required  examination of any person. The status report also said the suicide note was probably not written by Rohilla

After hearing the submissions by the amicus, the bench said it expects the police to cover all bases and talk to everyone. It directed the Deputy Commissioner of Police (south) to look into the matter, monitor the probe and file a detailed and comprehensive report before August 8, the next date of hearing. The court said the DCP shall file the report after examining all the material on record as well as the  complaints and communications received by Amity as well as the police. The GGSIPU was given a last opportunity to file a affidavit indicating its stand as it had not yet responded to the plea. 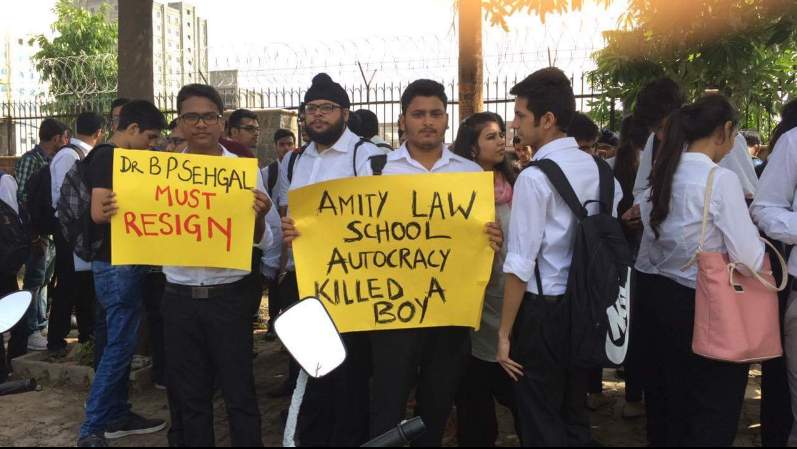 How it all unfolded:

The PIL was instituted by the apex court after taking note of the letter written to then CJI T S Thakur by Raghav Sharma, a close friend of the deceased and a 4th-year law student.

It has been claimed that Rohilla, who could not attend classes for quite some time due to various reasons including his health, was depressed over the prospect of not being allowed to take the exam by the college because of lack of attendance. The letter has blamed the Amity authorities for Rohilla's suicide.

Alleging harassment by his teachers, his classmates had taken to social media and launched protests on campus after his death demanding action against his professors, two of whom have since resigned.

The letter to the CJI had also sought that the apex court  should take cognisance of the incident and order a probe by an independent committee in such matters.

It also referred to the letter written by the student before taking the extreme step that he "might not mentally survive" the debarment. The college had said that the student had 43 per cent attendance, whereas the attendance requirement of the university was 75 per cent.