EXCLUSIVE: We defaced IIT, DU sites because we wanted to tell students the truth about their Army Heroes in Kashmir: Pakistan Haxors Crew says this is just a 'trailer'

The hacktivist group that took the DU, AMU and IIT sites down on Tuesday say that it is revenge for a recent attack and added that they would escalate it and take down more varsity sites soon

Till 6 pm on Tuesday the websites of DU, IIT-BHU, IIT-D and AMU displayed Pro-Pakistan messages after they'd been hacked by hacker group PHC (Pakistan Haxors Crew). Why'd they do it? When we got in touch via their Facebook page, the Pakistan-based hacktivist group that is the 'rough' equivalent of Anonymous, told us, "We wanted to get through to the youth of India by defacing these universities (sites) and tell the truth about what the (Indian) Army is doing in Kashmir." They did not seem concerned that it was a criminal offence and appeared to be quite proud of their accomplishment.

How's this for variety? The same Pakistani group had hacked the websites of the AIADMK and Jaya TV in 2013. They had also recently announced that they would be taking appointments for their "services" through their Facebook page.

When asked what the provocation was for this recent attack, they'd hit plenty of Indian politicians and parties in the past, they listed, "Indian kiddies defaced Pakistan Railway website. Indian brutality in Kashmir is always present and innocent people are being killed. Indian spy Kulbhushan Jadav's activities in Afghanisthan and Pakistan were also a reason." While these reasons may seem far removed from students in India, they believed they had made a veritable statement. 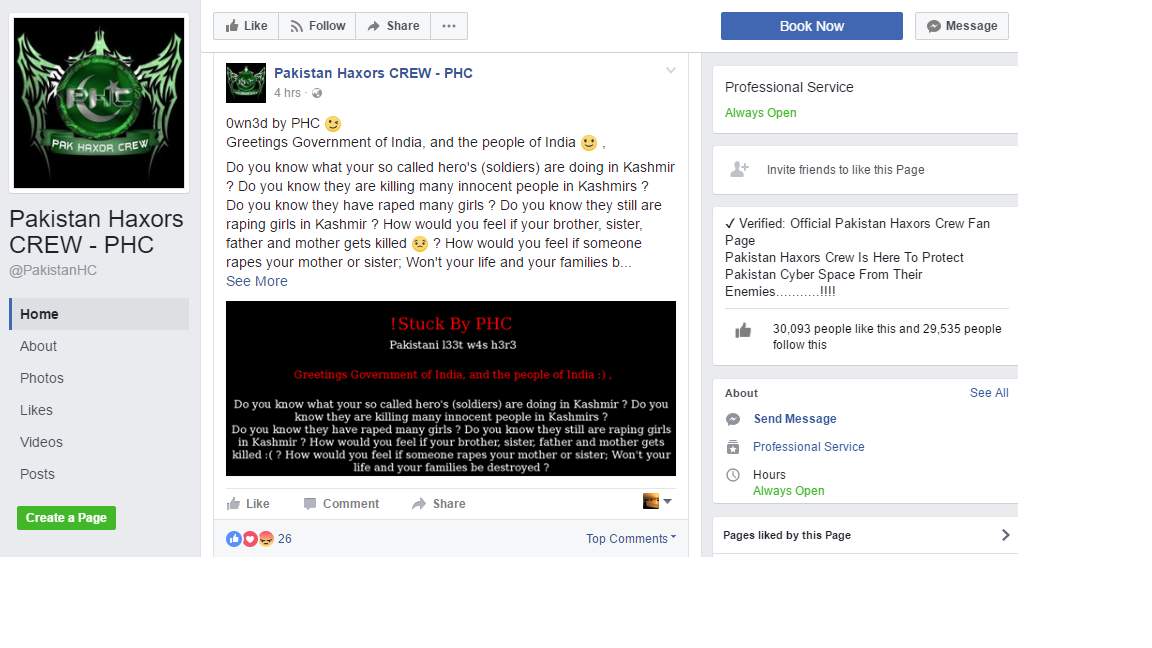 So now that they've toyed with the sites of some of the country's biggest universities we asked if their appetite for cyber destruction was done and dusted. Apparently not, "If Indian Army continues their act, we will soon deface google.co.in and many big Indian websites. We are peace lovers, but if Indians start the cyber war we are ready for the attacks," they wrote before firing a parting shot, "This is just a trailer."

If Indian Army continues their act, we will soon deface google.co.in and many big Indian websites. We are peace lovers, but if Indians start the cyber war we are ready for the attacks

Perhaps it was great planning or perhaps it was just random — but the timing of the hack was fortuitous for them and unfortunate for Indian students. Sources in Delhi University told us that hundreds of students had been trying to access the site in relation to their exam results and schedules, besides needing it for internal access like attendance etc. The hack was noticed this afternoon and remained in place till IT teams got around to it and restored normalcy. When we asked whether they thought they'd made an impact, they simply said, "Yes." How's that for confidence?

Reports have suggested that cyber sleuths are looking into the attacks.