Your photos are being clicked without your consent. What are you going to do about it?

You may just be doing absolutely nothing for these creeps to shoot videos and post them online. #IAmNotClickbait Campaign is an attempt to tell them victims aren't the women.

Are you one of those people who is annoyed with all those #MeToo statuses and complaints about how unsafe our streets are? Do you also think women don't deserve those reserved seats on buses? Well, you cannot be more wrong.

If you're a woman who has ever been used public transport, molestation on buses and trains is not news to you. You take all the precautionary measures you can, cover yourself, distract yourself from prying eyes, ignore the purposeful brushes, mutter under your breath because you're too scared to yell at the molester. But well, looks like you're still not doing enough. Now, men on buses are taking videos of you and posting them on pornographic websites. 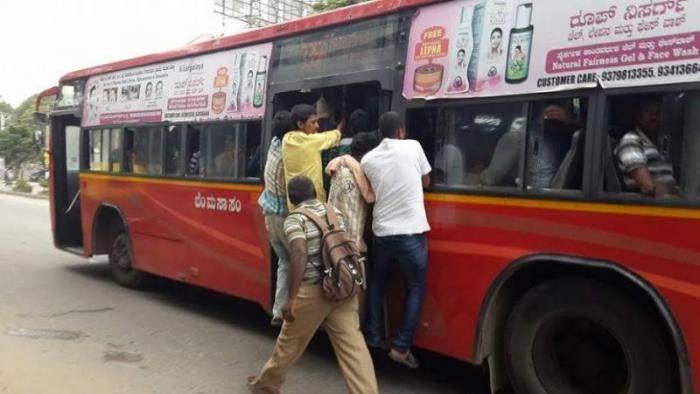 Thick cover: Crowds, which once were a deterrent to public indecency, are now what these pervs depend on

No. We kid you not. It is enough if you are just sitting and doing absolutely nothing, these men are taking videos and posting them online. Can it get more horrific? Yes, it can. It also seems like the people involved are orchestrating this whole video without your knowledge. In these videos, men can be seen shoving their crotches into the women standing in front of them during rush hour- you can see the woman squirm but you can see that she can't complain because it is 'rush-hour'.

From the way that the video is shot, it doesn't seem like it was caught by chance and neither does it seem like it was shot by a person sitting down. The video has been captured from the top, so the person shooting it has been holding the phone above his head. So now women have to be on the watch-out for people holding phones in strange angles or if they have their phone up for unusually long times. It's not enough to just try and balance yourself in an overcrowded bus or just stiffly sit till you reach your destination.

According to the Metropolitan Transport Corporation, a total of 3,688 buses run through 833 routes in the city. The Corporation states that an average of 48 lakh people travel in these buses, at least half or even less than half of the passengers are women so it is safe to assume that at least 20 lakh women take the bus. Out of the 3688 buses, 200 are women-only buses which means only about 18 percent of buses are completely for women. While these pictures and videos are clear violations of someone's right to privacy, there is no law in India that directly deals with public photography

However, the tragic part of this issue is that most times women don't know that there are being photographed or videotaped. There seems to be no concept of consent whatsoever in these cases. But if women do find out they are being photographed, do they immediately take them to the police? How do they register the complaint if the person escaped and no one has his details? Handling the incident when it happens is one thing but it seems almost impossible to prevent such videos from finding their way online.

So what can women really do?

We investigate, research, gather similar accounts, speak to experts, the police and the MTC officials to answer these very questions. Follow the #IAmNotClickBait campaign and work with us to make public spaces safer for women.