The New Indian Express' Let's Debate is India's largest inter-school virtual debate competition and it was held in association with Hindustan Institute of Technology and Science, Meil and Linc Pens

Sporting events are being held simultaneously with the nation's hospitals stretched beyond capacity, shortage of oxygen, ventilators and vaccines amid the raging COVID-19 pandemic. Is this the way things are supposed to be? Should we be spending millions on creating this bio-bubble just for the sake of sports and entertainment when healthcare should take priority? That's the question the students were asked to deliberate on at the Senior Finals of The New Indian Express' Let's Debate. The motion before the house was 'Expensive sporting, entertainment events should be put on hold till the pandemic passes'.

The New Indian Express' Let's Debate is India's largest inter-school virtual debate competition and it was held in association with Hindustan Institute of Technology and Science, MEIL and Linc Pens. The senior finals was judged by prolific author Anand Neelakantan and The New Indian Express' Editorial Director Prabhu Chawla. Taking out the competition, Odisha's Sai International School's Arush Sarma emerged the winner of the first edition of the debate. He also won the prize for the finest point. Speaking against the topic, Arush said, "Does the virus discriminate on the basis of wealth or race? Then why should the focus be solely on expensive events? Are we targetting rich investors in Marxist-driven obsession? If not, then let's stop all events and watch Kisaan Bandhu and Yoga programmes all day. For one moment, think about the lakhs of families being told to stay home and stay safe. And do what? They need to break to sit in front of the TV as a family to boo and cheer." Arush also highlighted how such events convey the image of two Indias. "One struggling for a hospital bed, the other holidaying in the Maldives. There are two Indias. And if we think by banning such events we will be bridging the gap then we are living in 'Pappu's paradise'. So you are going to punish those of us left behind by taking away the few hours of entertainment. Someone who has a family member on the death bed doesn't care about sports but others do. And these others constitute 99% of India's population. Should the whole country stop working and start mourning?" said Arush.

Indeed Arush's statements impressed judge Neelankantan who said, "It was fascinating to hear the students, especially those supporting the IPL. I want to congratulate them because it is very difficult to convince." Prabhu Chawla too pointed out how this represents India's future generation. "I was very impressed with the quality of participants. All of them were passionate about the subject they were speaking on, they have done their research. It is a good indication of the future generation who are very clear about what they want and what they don't," the seasoned journalist said. 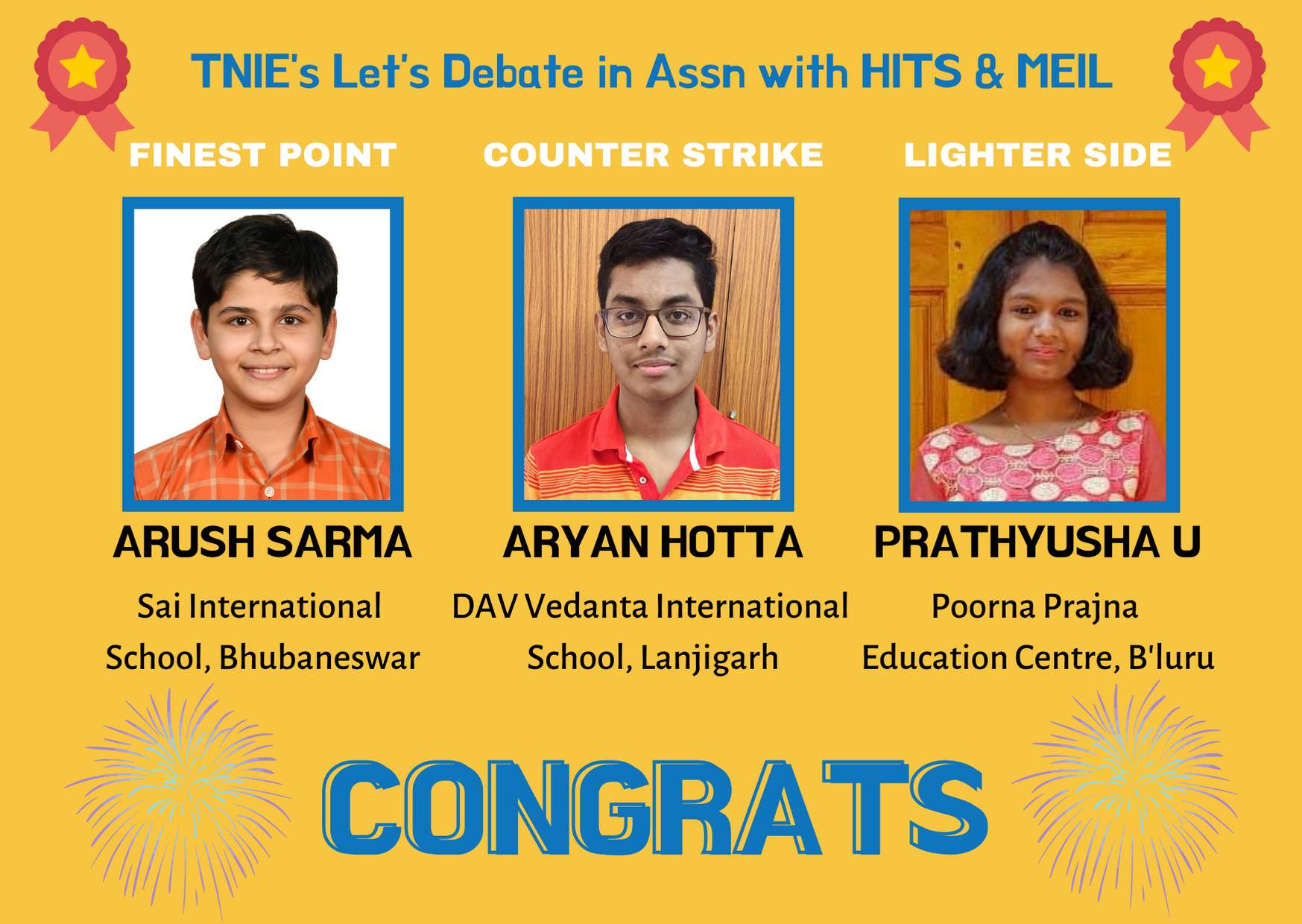 Speaking for the motion, Jay Min Divakar, a student of Gems Modern Academy in Kochi, who emerged as the runner-up, said, "We can use several frameworks to make sense of the motion - rationality vs emotionality, economic development vs sustainable development, individual good vs social good. This topic brings forth the fundamental question - how we should live our life." Quoting Adam Smith, Jay Min elaborated how man is a rational animal who makes the right bargains in life. "I am numbed by numbers right now and reality is grim for millions of people. And to think of going out to have fun is neither logical nor ethical. Rationality tells me we should put such events on hold as life only exists till we die. Yes, we need to keep the economy alive for survival but hosting mega-events now is not the way to do it. Life is not a sprint, it's a marathon. You have to pace yourself otherwise you might get tired." said Jay Min.

Besides the awards for the winner and runner-up, prizes were also given for Finest Point, Counter-Strike or best rebuttal and Lighter Side or the most humourous. While Arush Sarma won the prize for the Finest Point,  Aryan Hotta, a student of DAV Vedanta International School, Lanjigarh won the Counter-Strike Prize. Prathyusha Udupa, a student of Poorna Prajna Education Centre, Bengaluru, won the prize for being the most humourous.