This 23-year-old rode an old Hercules cycle from Kerala to Kashmir, and sold tea to fund his travels

Nidhin Maliyekkal travelled for over 4 months through 16 states to finally reach Kashmir on an old, borrowed bicycle and funded the trip by selling tea on the way

At the age of 23, Nidhin Maliyekkal recollects the 3 months where he actually attended college. The Thrissur resident would travel by train to Ernakulam where he was pursuing an Automobile Engineering degree. Somehow, he remembers more of the train rides than his classroom. Slowly, he stopped entering the classroom at all, extending his journeys a little further and travelling to parts of the state that he had always dreamt of seeing.

By 2019, he had dropped out of the course and had travelled across almost all of South India by hitchhiking. “My greatest dream has been to work in filmmaking. What I relate my journeys to the most is cinema. To me, the people I meet on each trip are characters in the film that I will one day make.” In fact, Nidhin has attended more than 75 auditions, some of which failed to have the result he wanted. 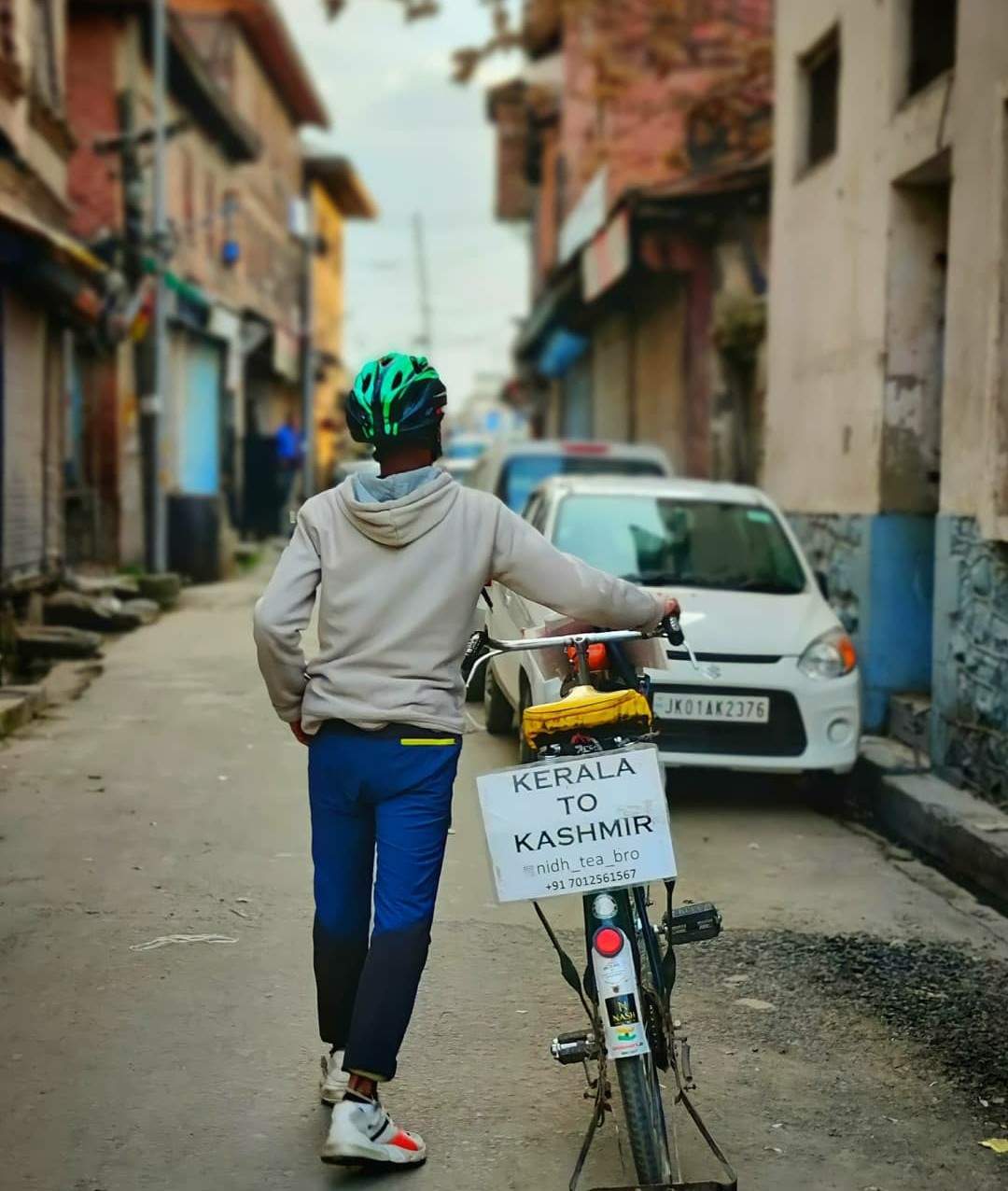 WHEEL WARD: Nidhin used a cycle that he borrowed from his brother

So that ties in with why Nidhin decided to buy himself a camera and how he began working in a tea shop to earn enough money. And in March last year, he finally bought it. The joy of the purchase was followed by the Coronavirus and a subsequent lockdown. During this time, he lost his job and had to stay at home indefinitely.

That's when he had this urge. And it was an all-consuming one. He recollects not wanting to waste another year. “I always wanted to go to Kashmir by cycle,” says Nidhin, “I couldn't afford a new one. But my brother, who is a 12th standard student, has an old Hercules cycle that he is too embarrassed to take to school. I sold my camera, got the cycle repaired and decided to find more characters to dream of, even if the film in my head didn’t come to life any time soon.”

On January 1, he left home at the break of dawn. With just 170 rupees in his pocket, a flask and stove secured onto the rear seat of the cycle. And the funds for the trip? Nidhin had decided to travel across the country by selling tea, something that he had learnt from his time working. He says, “I just thought, why not use whatever skills I had to do this thing that I have always wanted to do? I did not want my life to come to a standstill yet again.” TEA TALES: For Nidhin, the journey was life-changing

He explored the country over the next 102 days. Covering 16 states by pedalling across 5647 kilometres, he stayed for 25 days with a few new friends he found in Manali and spent 5 whole days discovering Delhi in wonderment. He would sleep in a tent and cook his own food, making just enough by selling tea to get from one place to the next. Since the first wave of COVID-19 had just begun to pass, most of his journey to Kashmir was seamless. Once he reached the Jammu border, he took a COVID test, which turned out to be negative, before he finally reached his destination.

“There was nothing to be afraid of on the way. In fact, I met some of the most wonderful people. I don’t speak a word of Hindi, but I made it through quite easily by just using sign language. I feel like I now have a home to go back to in every village that I passed. In Maharashtra, I met a group of young people who took me back to their village. They were so taken by my story that the village elders felicitated me and put a garland around my neck to celebrate my journey,” he says.

On April 30, Nidhin returned home. Since COVID had reared its head again, his journey back was atop a lorry headed from Uttar Pradesh to Thrissur. To others who would like to discover the country for themselves, he says, “There’s nothing to be afraid of. Good and bad is everywhere. It all depends on how we approach another person. And it certainly helped that I was on an old worn out bike - everyone just wanted to help me!”