Merging Parallels is not Apoorva Krishna’s first track and after listening to the song, which releases at 7 pm on Thursday you’ll find yourself hoping that it won’t be her last either. Check it out!

So, instead of us introducing you to alumna of Berklee College of Music and musician Apoorva Krishna and her new track Merging Parallels, we thought we'll let Grammy award-winning guitarist John McLaughlin do the talking. "I've been involved with musicians from India and Indian music for the greater part of my life and one of the fascinating aspects I have experienced is the attempt to integrate harmony into the Indian traditions and now we have this young generation of the 21st century and they are studying Western music — in particular, harmony and this music video from Apoorva and Varijashree is a composition from Apoorva called Merging Parallels and it's amazing how now they are integrating harmony into the melody, with the sophisticated rhythms of India and its really an amazing piece of music, really quite outstanding. I hope you enjoy it!"

This is what the English musician who is the pioneer of jazz fusion had to say in a video byte that will introduce to the world the track, Merging Parallels. What is unique about this three minute 15 seconds track that releases today on YouTube is that it integrates western musical chord progressions and harmonies into a Thillana (a rhythmic piece in Carnatic music) format in a way that the pitch and scale is constantly changing. You'll know what we are talking about at 7 pm today, as that's when the song will release. Apoorva, who has also composed the song, plays the violin and is joined by a vocalist and other musicians who play the khanjira, bass and chords. So before you get to hear the song, we give you a sneak peek into the mind of the musician herself, how the track happened and how John McLaughlin went on to mentor her. Excerpts from our conversation: 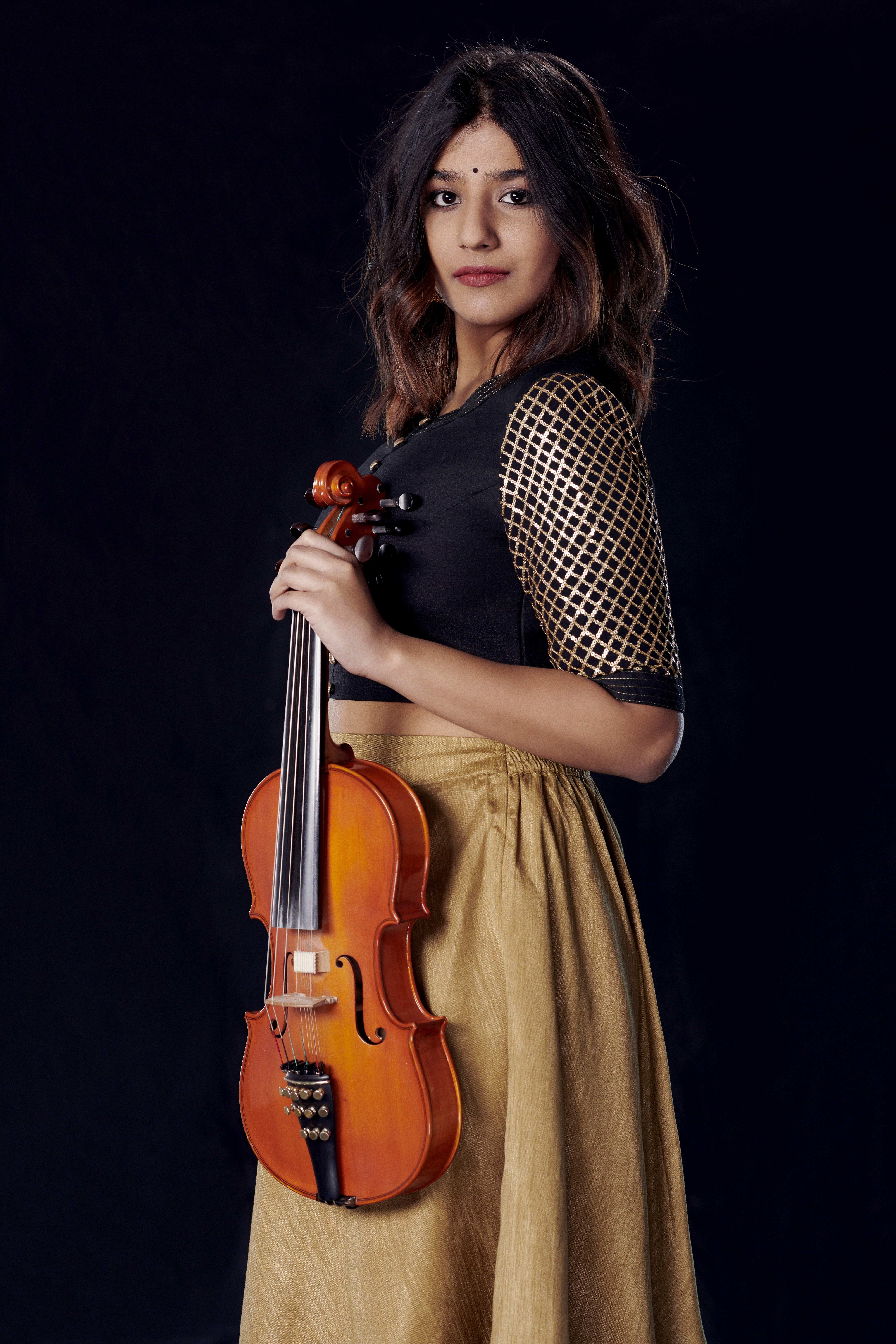 Firstly, tell us about where you grew up and how you discovered that music is going to play such a huge role in your life?
I grew up initially in the USA and studied until the fifth grade. I then moved to Bengaluru in 2007 and graduated with a BBA in 2017 from Jain University. My parents observed my interests in music and initiated me into Carnatic Violin under Guru Anuradha Sridhar and Lalgudi Srimathi Brahmanandam since the age of six.

Before you performed with Zakir Hussain and John McLaughlin at Berklee, what would you say your milestones were?
After gaining a strong foundation in Carnatic Music for over 15 years, I was eager to expand my learning and explore Western music, especially Contemporary Fusion Music and sought to pursue a Master’s programme in Contemporary Performance at Berklee College of Music at Valencia, Spain. I had the great opportunity of collaborating with some of the best musicians of the world from different genres like jazz, flamenco, hip-hop and Middle Eastern styles. Some of my European performances were in the Sony Auditorium in Madrid and the Jazz Jantar Festival in Poland, a Polish jazz festival. I also enjoyed composing, fusing my roots in Indian Classical music, and collaborating with Latin Jazz styles of music alongside the legendary Grammy nominee William Cepeda.

Tell us about performing with the duo and how John McLaughlin really went on to mentor you. In which aspects did he help you particularly?
After completing my Master's programme at Berklee in Valencia, I did my Post Master’s Fellowship at Berklee College of Music, Boston in August 2019. In November 2019, Berklee India Exchange organised a performance, commemorating the honorary doctorate degree being conferred upon Ustad Zakir Hussain. In this connection, John McLaughlin was also present as Guest of Honor. It was in the musical show and at the end of it, I was blessed to perform alongside both the legends, in an impromptu manner when the legends themselves invited me on to the stage to join in and perform the Shakti masterpiece Lotus Feet along with them. It was a dream come true moment, for me and I felt very blessed and grateful to share the stage with such legendary musicians! Since then, I was fortunate to receive McLaughlin sir’s guidance and mentorship on building collaborative musical connections between Carnatic and the Western Contemporary world, especially regarding harmonies and chord progressions. Since McLaughlin sir has been deeply involved in his journey with Indian musical forms over the many years of his illustrious professional career, I was fortunate and inspired by McLaughlin sir’s guidance in my search to find similar connections between our music and the Western music world. We could easily share ideas, and thus, my composition Merging Parallels found its inspiration and shape within. 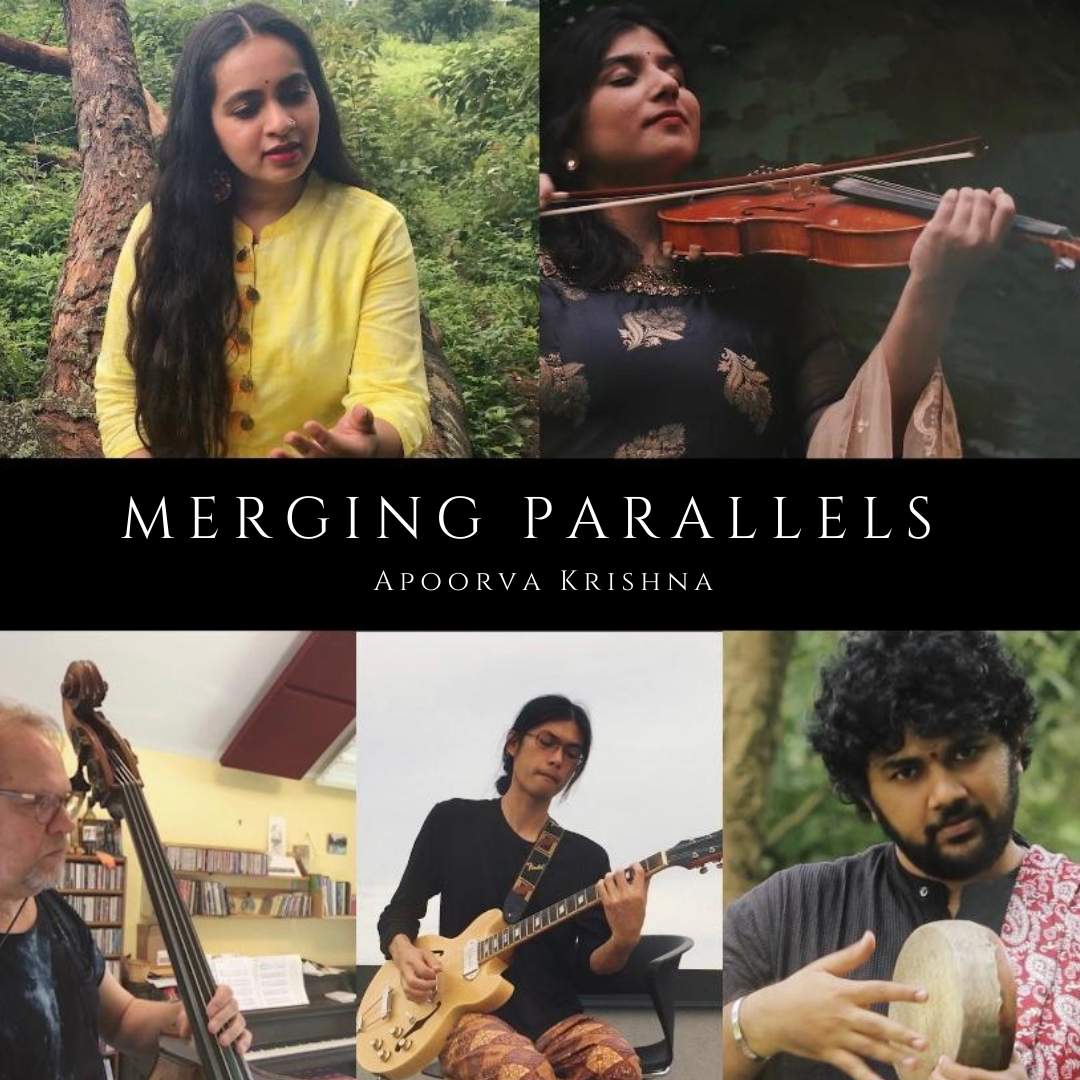 Behind the song | (Pic: Apoorva Krishna)

Tell us about when exactly the idea of Merging Parallels occurs to you and how you went about executing it?
In December 2017, I composed five thillanas and launched my debut album Apoorva Thillanas. This was launched by TWAANG from India and at the Cleveland Aradhana in March 2018. As the name suggests, I was inspired to compose a new thillana integrating western musical chord progressions and harmonies into the thillana format so that the dimensions of both sruthis (pitch) and ragas (scale) which are being changed within the Thillana are seamlessly integrated with the chord progressions and harmonies as beautifully brought to life by Varijashree Venugopal, Aleif Hamdan, Bruno Raberg, and Sunaad Anoor. The thillana is conceptualised through ‘Aadhara Sruthi Bedha Raga Malika’ and I truly thank my incredible artistes for it.

What were some of the challenges you faced while working on the song? Do tell us about the progressive arrangement.
As the pitch and ragas keep changing in the form of a Carnatic Thillana, about 18 times, the chord progressions need to provide seamless sruthi/pitch support and transitions appropriately, to embellish the harmonies within the composition. As this was a new concept I was exploring, it was challenging staying within the structure of the traditional thillana format and being in line with the Jathi prayogas/rhythmic pattern weavings and iteration with the tala cycle. The Thillana also had an Athitha start to begin with, and the coordination between the beat cycle and melodic as well as tonic shifts had to be incorporated, without compromising on the aesthetics of the composition. 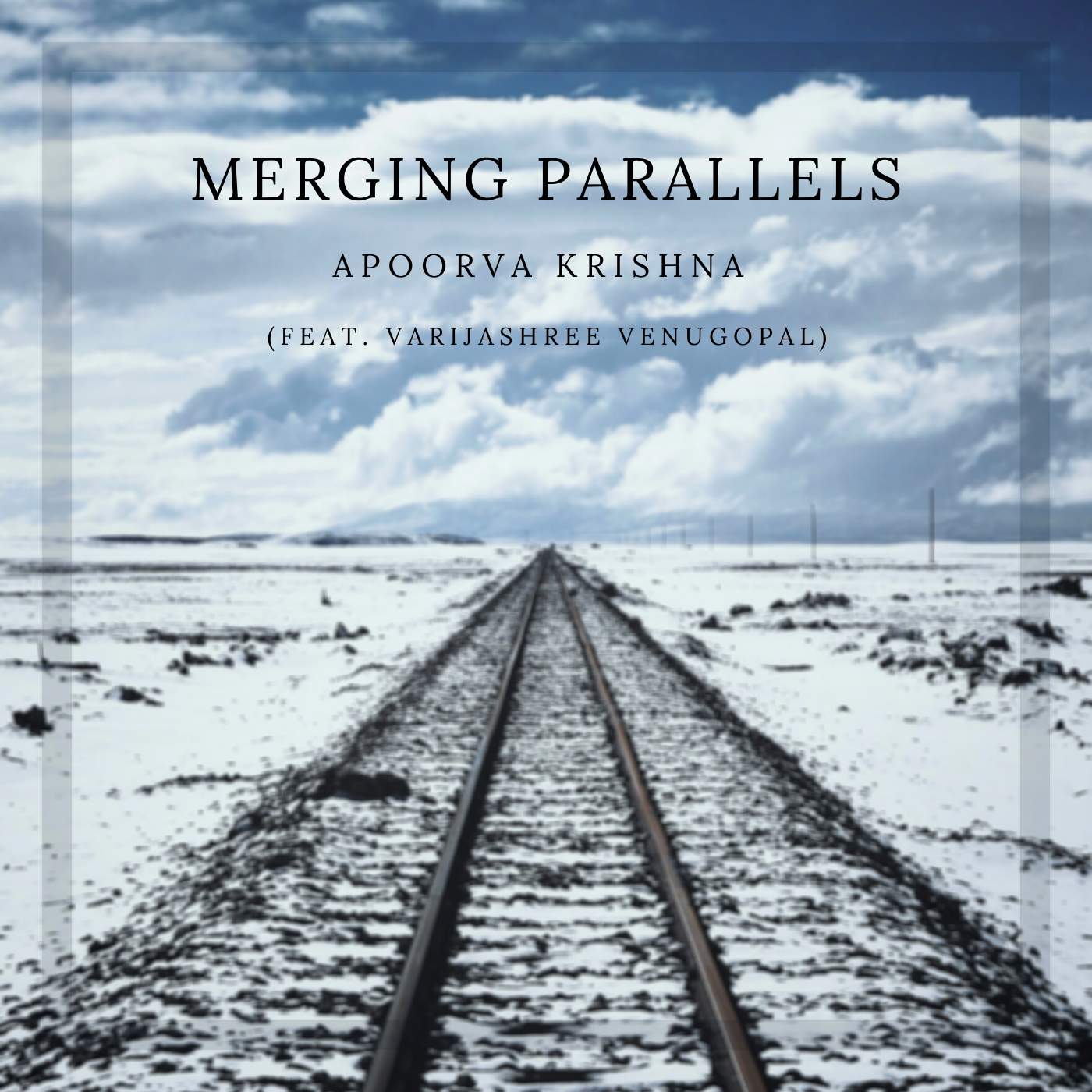 Since fusion is a completely different ball game, tell us what it takes to create a fusion track. What are some of the nitty-gritties one has to keep in mind?
Fusion music is all about musicians finding their individual space and yet being able to come together within the collaborative experience of making creative contemporary music and sounds in a common space. This is a great way of combining cultures, uniting sounds, and yet continuing to remain core to the musical art form native to the musician too! I believe that music knows no borders or boundaries. My listening skills and appreciation for different food, cultures, traditions and music around the world have given me the strength to think and create music in a collaborative and open manner, and Merging Parallels is a heartfelt attempt to bring about two different worlds of musical styles or forms melding together in a manner like never before.

What is the future course of action for you? What do you plan on doing and how do you want to go about it?
My strong foundation in Carnatic music gives me strength to explore deep into the Contemporary World. I wish to continue propagating my roots in traditional Indian Classical music, by understanding and appreciating music and musicians across the globe.

At this point in life, what has music come to mean for you?
Music defines me and is what I am. I am exploring my soul and self in the music that I am trying to play, make, listen and appreciate through my inner self as well as when I join to perform in a collaborative manner with fellow musicians and artists. I thank my family, gurus, musical sponsoring organisations, institutions, and well-wishers and I truly feel that music has the power to heal and bring life to anything.