How this 25-year-old has brought over 1,000 forgotten, ignored history hotspots in Telangana to our notice — and rejuvenated some of them

If you are a history buff, and especially in awe of the Kakatiya dynasty, you must have heard the name Aravind Pakide. This 25-year-old is on a mission to shed light on these forgotten monuments

Beware, if you ever happen to interact with Aravind Pakide, the 25-year-old famous for bringing into the spotlight several almost forgotten heritage sites and monuments, and in a state of excitement, end up asking him how many historic sites he has ‘discovered’, he might cringe. You see, the youngster doesn't prefer the word 'discovered'. "Someone or the other knows about each and every place. I just merely help bring attention to it," he says modestly for someone who has visited 11,000 monuments or cultural places of cultural importance across 13 districts in Telangana.

While pursuing plus two, he visited the Warangal Fort with friends. That's where his tryst with history began

Last year, he famously held a photo exhibition called The Untold Telangana at ICCR Art Gallery, Ravindra Bharathi in association with the Department of Language and Culture, Telangana. And the day we spoke to him, he met the Minister of Tourism & Culture and Archaeology, V Srinivas Goud to draw his attention to the Devunigutta Temple in Kothur village and its dilapidated state. 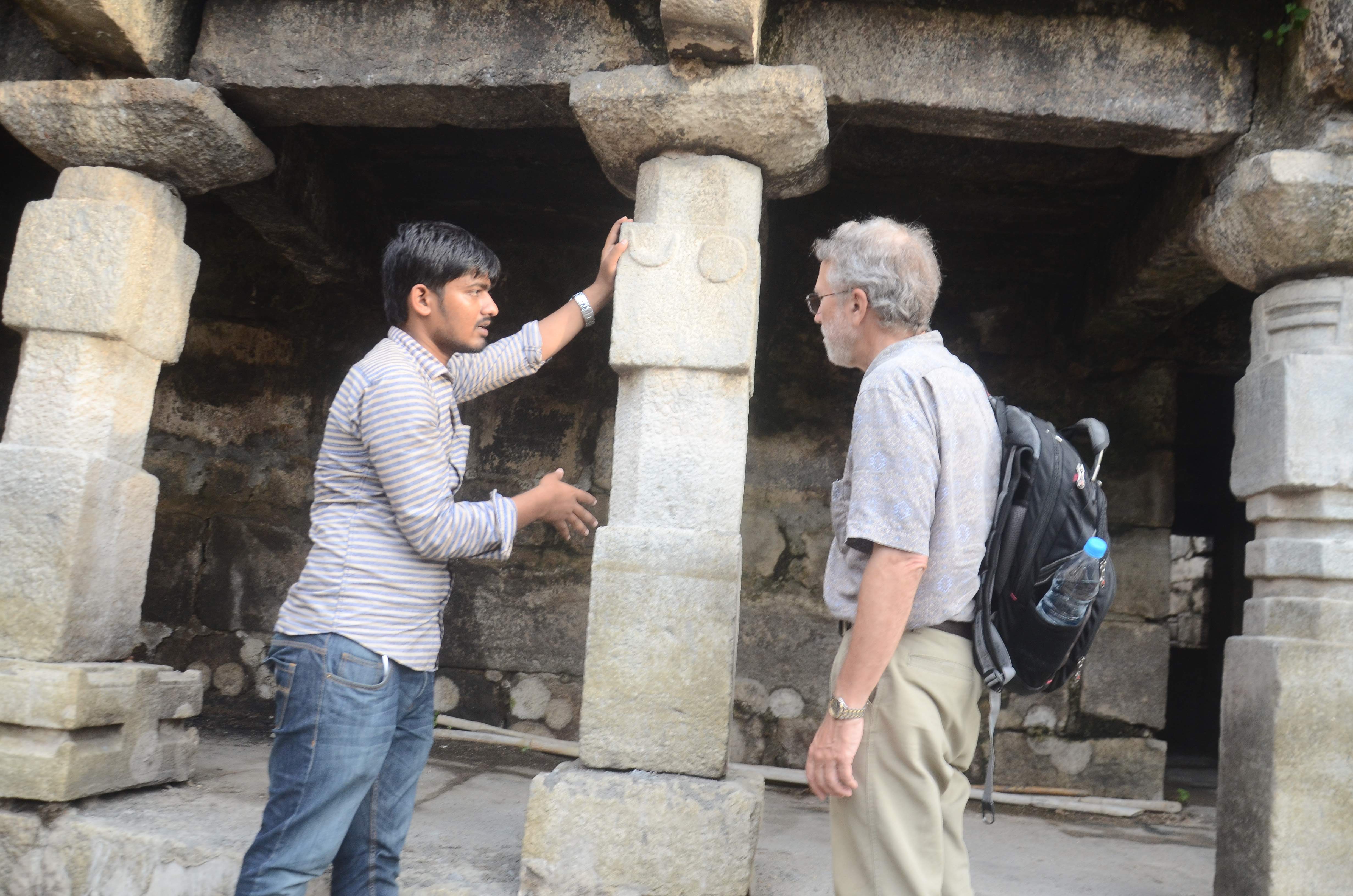 Sidebar: We are all aware of Cambodia's Angkor Wat, but do we know about Devunigutta Temple? Similar in architecture, it is located on a hillock in the forest near Kothur village but unlike Angkor Wat, it lies in a dilapidated condition and has been a victim of extreme neglect. When Aravind famously posted about it on Facebook in much detail, it started drawing international researchers — including people from Germany and Italy — who visited the temple that is made entirely of sandstone bricks. And yet, Aravind's crusade for it is still on. "The recent rains which lashed the state have made the condition of this temple, which has over 1,600 sculptures, worse," he laments.

He goes through archeology reports and visits several libraries, like the Archaeological Museum Library in Gunfoundry-Abids, to find these hidden gems

Listen to what he's saying
Parallelly, what's new with the youngster is that after an exhibition and a book, he came out with a podcast titled The Untold Telangana, the same name as the book and the exhibition. Launched on World Tourism Day, that is September 27, 2020, this Telugu podcast is available on Radio Dhvani and covers the explorer's favourite subject — spreading awareness about Telagnana's untold cultural monuments and heritage. 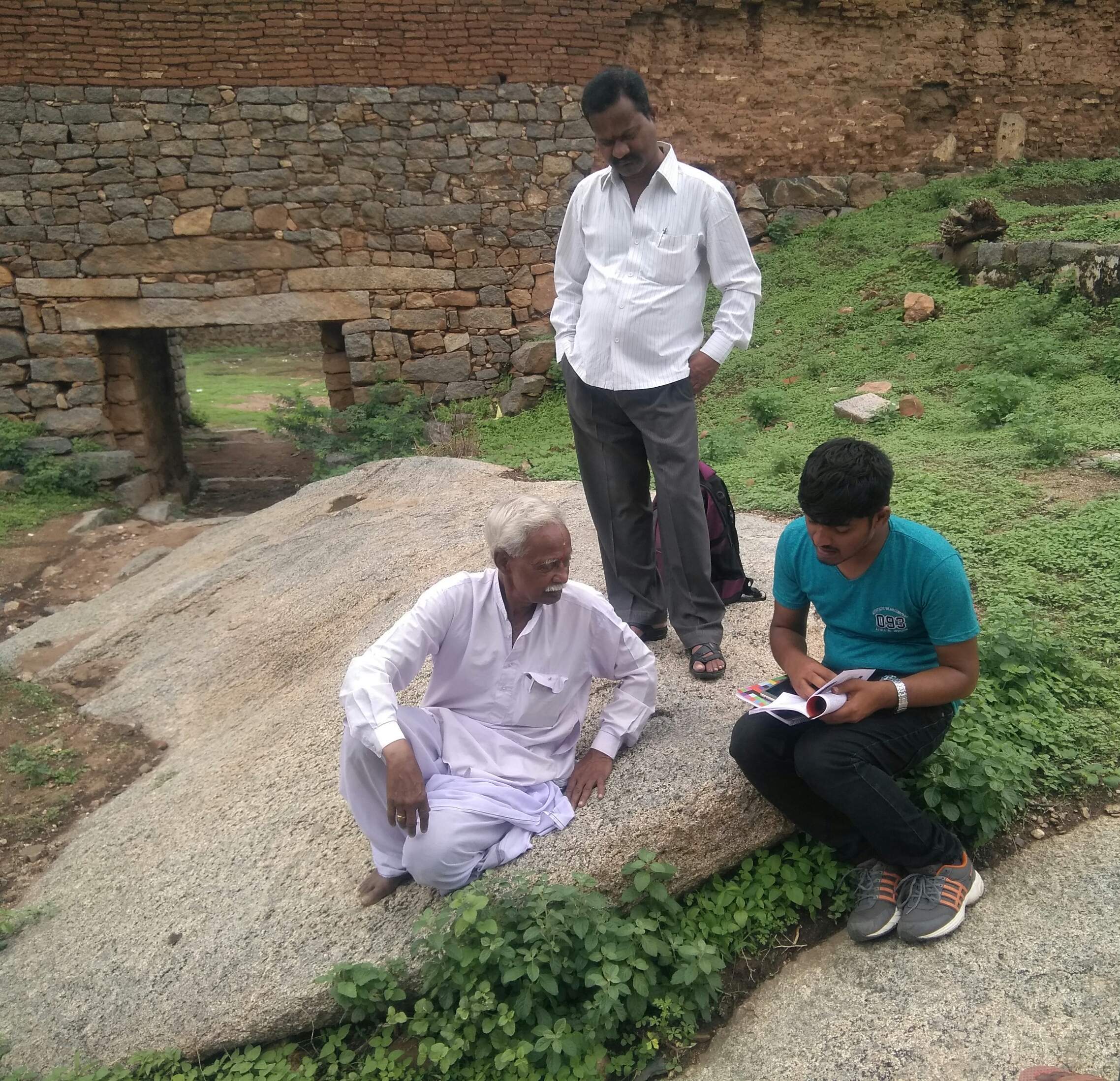 But how does this young explorer even find these historic sites? "Usually, I approach the eldest residents of every village and ask them about old monuments, temples and so on," shares Aravind. But finding these places are the least of his problems. Because the real obstacle course begins when he finds them. Encroachments, finding it in a mess and complete neglect — that's the state of most of the places he 'rediscovers'. "Once, when I found an 11th-century monument in Undrugonda, Suryapet, it was registered in a person's name," says the youngster, still sounding flabbergasted. Encroachment, indeed, is a menace. Sometimes he gets lucky and is able to deal with them swiftly. Like the time in 2017, when he complained about encroachments in one of the step wells from the Kakatiya era to the then District Collector of Warangal Urban District Amrapali Kata (who is now Deputy Secretary to PMO), she sprang into action. He has saved five such step wells from encroachments. "Not just this, we help clean the water, maintain greenery and sometimes, even organise light and sound shows," he says and adds, "It is only because of a handful of committed IAS officers that we are able to bring about change, otherwise our complaints often go unheard," woes the youngster who is pursuing his Master's in History from IGNOU. Another helpful officer is VP Gautham, Collector and District Magistrate, Mahabubabad, he shares.

Aravind's wish is to document the monuments from the Kakatiya dynasty in Telangana, Andhra Pradesh and Chattisgarh

If not him, then who
So why do Indians have no regard for our heritage structures? Is it the problem of plenty? Aravind avers and adds that every village will have two to three structures of historical importance dating back a century. "Charminar is older than the Eiffel Tower and yet, it is just considered as a building," he points out. Ouch! If that's the case with Telangana's most popular historic monument, it hurts to think about the others. Of course, education is at fault, as it doesn't inspire pride in the culture that surrounds us, neither does the government do enough to preserve these structures. But Aravind gets specific. "The Department of Heritage, Telangana has less than 1,000 members for all the districts. Tell me, is that enough? How can we conserve without human intervention?" he woes. Moreover, the state government is yet to fully form the Telangana State Heritage Authority (TSHA) and Greater Hyderabad Heritage Committee (GHCC) and they have had just two meetings since 2017, as per the response to an RTI filed by activist SQ Masood. 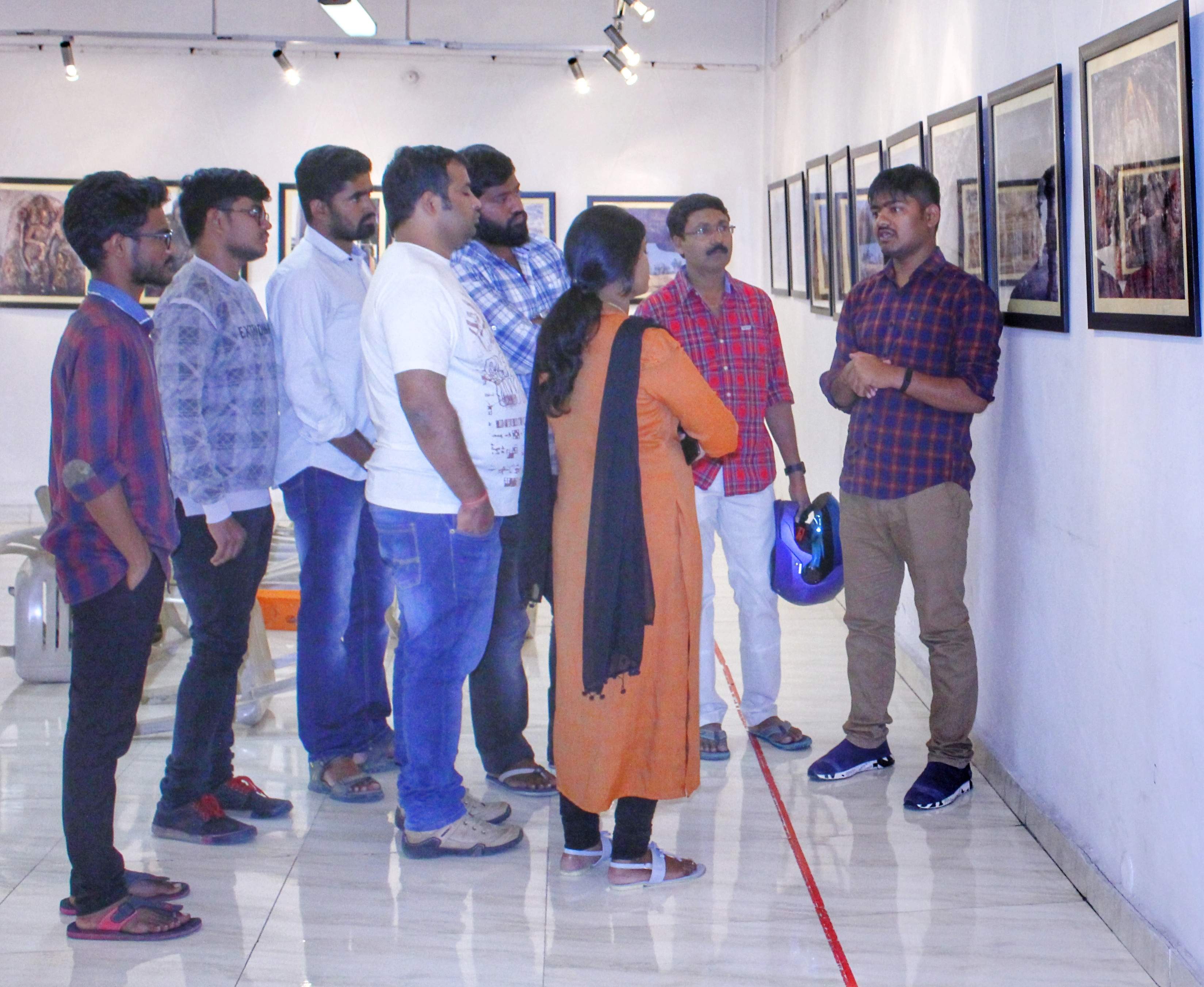 At the exhibition | (Pic: Aravind Pakide)

Aravind tells us about Pandavula and the glorious rock paintings that date back to 500 years. But now, over these paintings are the scribblings of youngsters. How will this do, when the young, who ought to be the preservers, are the destroyers? But as long as people like Aravind are around, maybe there is still hope. They will continue to explore and shine a light on those monuments that speak about the glorious days of India, but have been silenced now. Maybe Aravind can be their voice.

He frequently visits the descendants of the Kakatiya dynasty, who are now in Chhattisgarh for research

Back on the map
Thanks to the effort taken by Aravind and others, these places in Telangana have been rediscovered Location: Karimnagar
Dates back to 5th - 6th century AD
These are a group of four rock-cut cave temples facing west on the banks of Manair river. Locally, these shivalayas are called Naina Gullu. Unfortunately, it is partially in ruins owing to the inferior quality of the rock stone and natural calamities. These rock-cut temples resemble the famous cave temples of Moghalrajpuram near Vijayawada constructed by the Vishnukundins. Location: Warangal
Dates back to 10 - 11th century AD
This beautiful group of Saivite reliefs sculpted ashore the famous Bhadrakali lake are believed to be constructed by some unknown devotees in the Rashtrakuta style. Some of the notable sculptures are that of Goddess Mahishasuramardini, Lord Vinayaka and a Shivalinga. Location: Kacharajupally village
Dates back to Prehistoric times.
These prehistoric twin caves of Kacharajupally are probably the oldest caves in both the states of Telangana and Andhra Pradesh. These are naturally formed ancient twin caves in which prehistoric man could have made his habitation. The caves have a very narrow opening, but inside they spread out into huge spaces with the hills as rooftops. The most unique feature of these caves is that they are green in colour. Location: Dameravai village
Dates back to 1500-600 BC
Deep inside the thick Tadvai forests, near Dameravai village, megalithic tombs called Dolmens can be found on a hillock. They are believed to be around 3,500 years old. This consists of two or more thick structures supporting a huge horizontal capstone. These Dolmens help us understand the ancient funeral rites 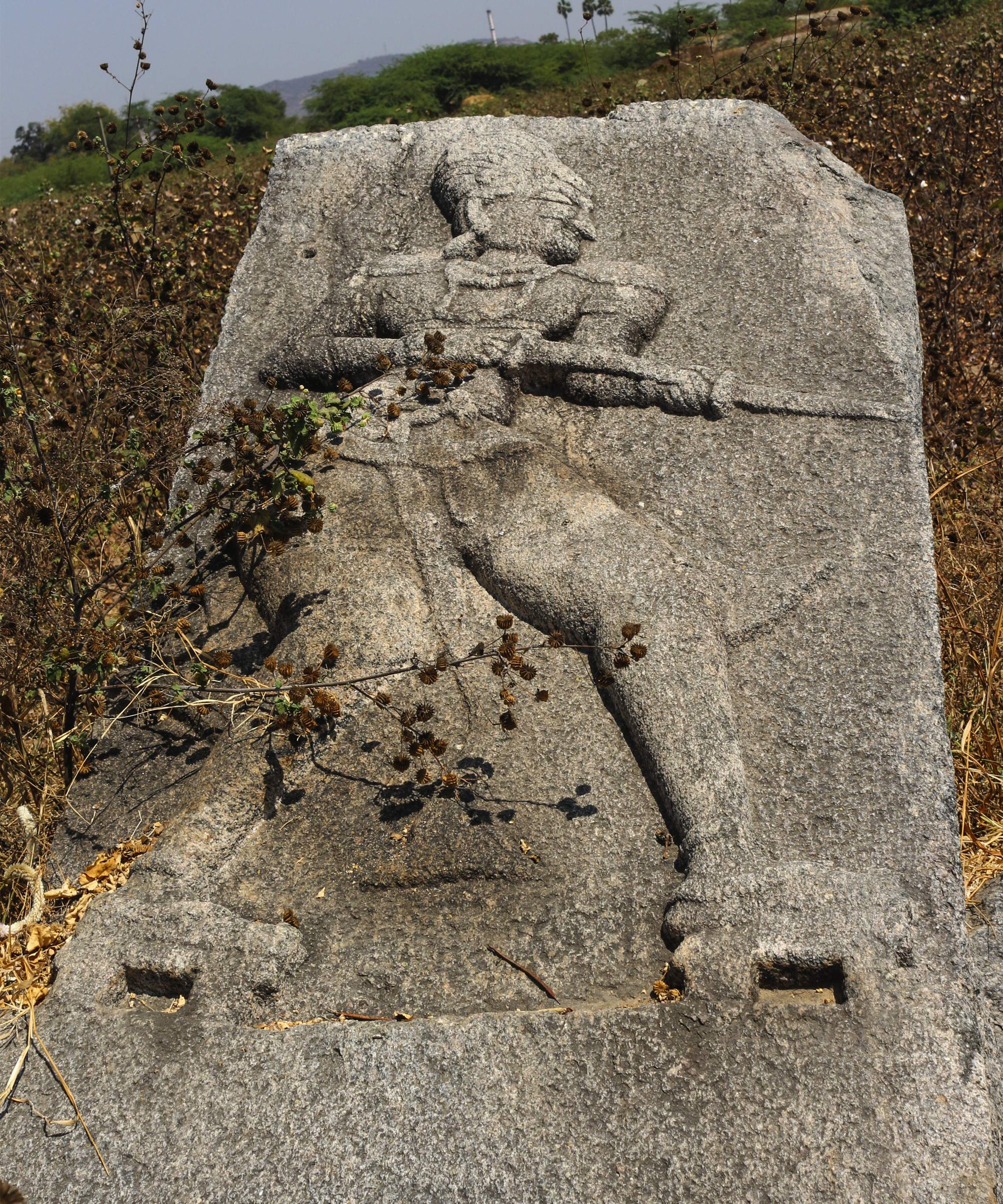 Location: Nidigonda village
Dates back to 12th century - 13th century AD
Hero stone is also called Veeragallu. A hero stone is a memorial commemorating the honorable death of a hero in a battle. This hero stone shows a warrior posed heroically with two swords. The most striking feature here is that our hero here is wearing high-heeled footwear. He also sports a unique headgear Location: Mahadevpur
Dates back to 13th – 14th century AD
The Pratapagiri Fort is in the thick forests of Mahadevpur. At a distance of about six kilometres from the village, there is a hill on which the fort is built in stone. As it is in the thick forest, it is known as vanadurgamu as well as giridurgamu, for it is built on the hill. There is an un-dated Telugu inscription of nine lines on the wall of the fort at the top of the hill. 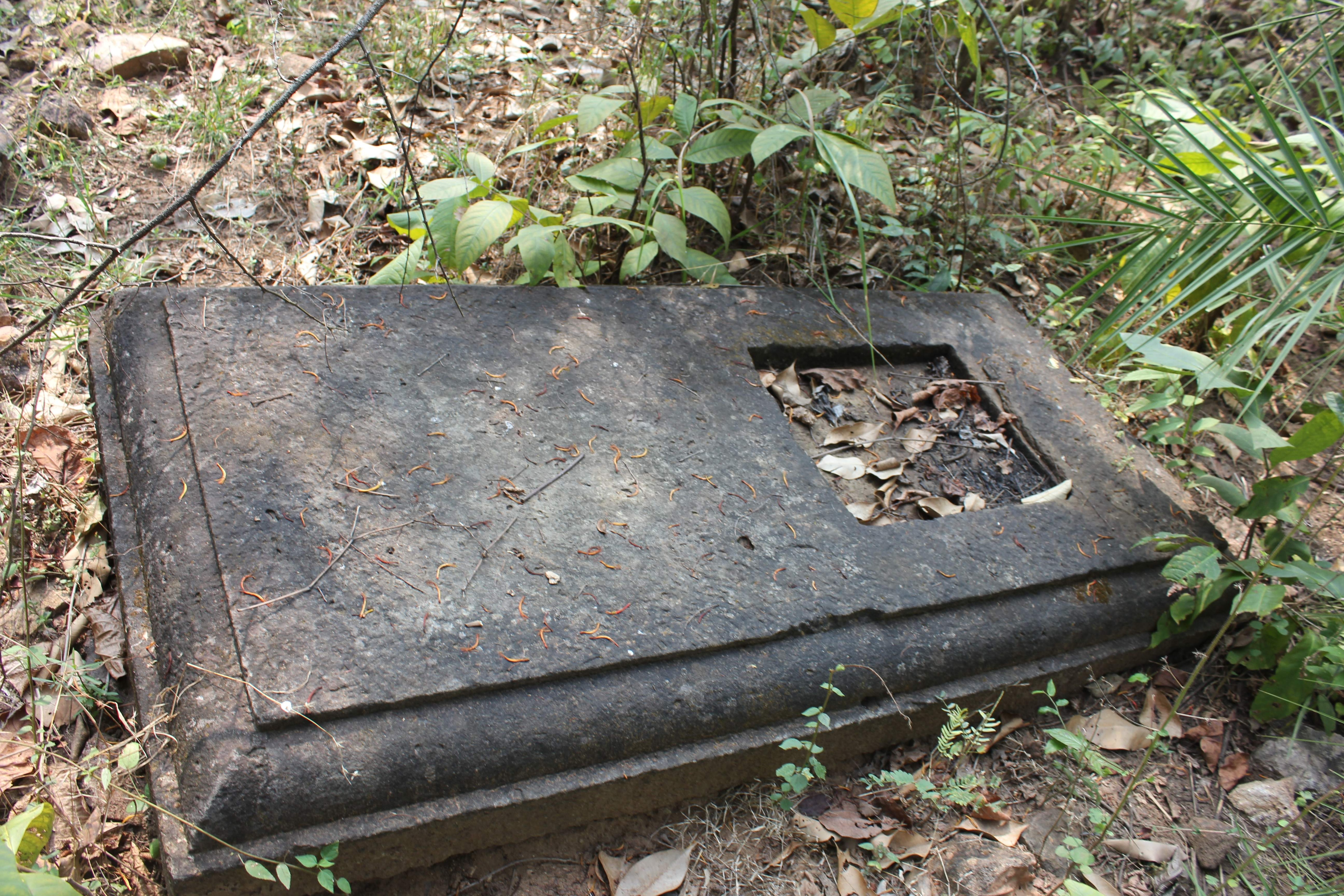 Location: Karimnagar District
Dates back to 19th century AD
This is the brainchild of Nizam Afzal ad-Dawlah, Asaf Jah V Mir Tahniyath Ali Khan and French engineers. The Nizam made an unsuccessful attempt in the 1860s to build a river crossing and its remnants still remain. Due to the plague, this project was abandoned. It is said that almost 2,000 personnel working on this project died on a single day infected by the plague. There are also some graves belonging to the French engineers 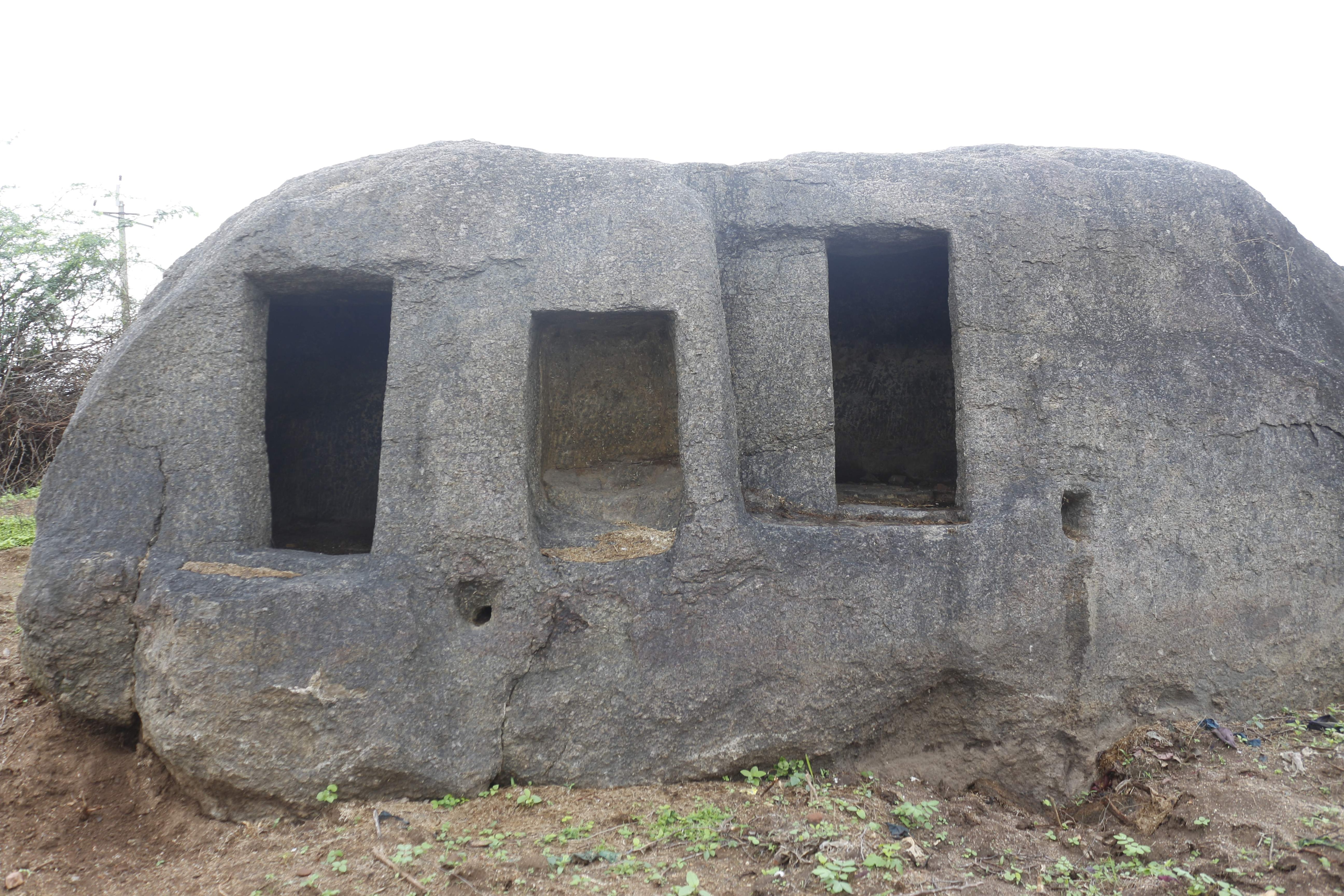 Location: Mogilicherla
Dates back to 12th - 13th century AD
This is a huge rock boulder chiseled to square-shaped cave-like structures. These are, in fact, incomplete rock cut cells of Jain ascetics. Warangal was a prominent center of Jainism right from the Rashtrakuta times up to the end of the 12th century AD. But yes, Shiva lingas have been carved inside these cells suggesting the Saivite dominance in the region later on.

For more on him, check out facebook.com/aravindaryapakide