After this 26-year-old’s arm was amputated due to a road accident, he launched a start-up that 3D prints customisable prosthetics

Rishi Krishna's start-up Symbonic is into assistive technology. And this is how they ensure that the prosthetics they offer are light-weight, customisable and affordable as well. This is his story

When in September 2018, Rishi Krishna's arm was crushed in a road accident, it changed his world forever. Not only because he had to amputate his arm, but also, because he was exposed to the plight of an amputee. "No artificial limb would work for me. The high-end ones were over Rs 40 lakh and the cheaper ones had no utility value at all," laments the 26-year-old. That's when he thought of 3D printing an artificial limb that will serve his needs. What started as a home project is now a start-up, Symbonic, which is incubated at Vellore Institute of Technology. And soon, they are going to start clinical trials.

"The idea was to democratise assistive technology and provide a low-cost and high-tech option," says Rishi, who is a resident of Chennai. So what makes their offering unique is that it is by an amputee and for an amputee. "This is not an engineering project for me, it is a passion project. It is my own perspective that I bring to the design which makes it unique," he explains. They use the combined power of Machine Learning and pattern recognition with the addition of EMG (electromyography) in their sensors, which are made in-house, to ensure that the prosthetic understands what the end user is trying to achieve and help them achieve it. 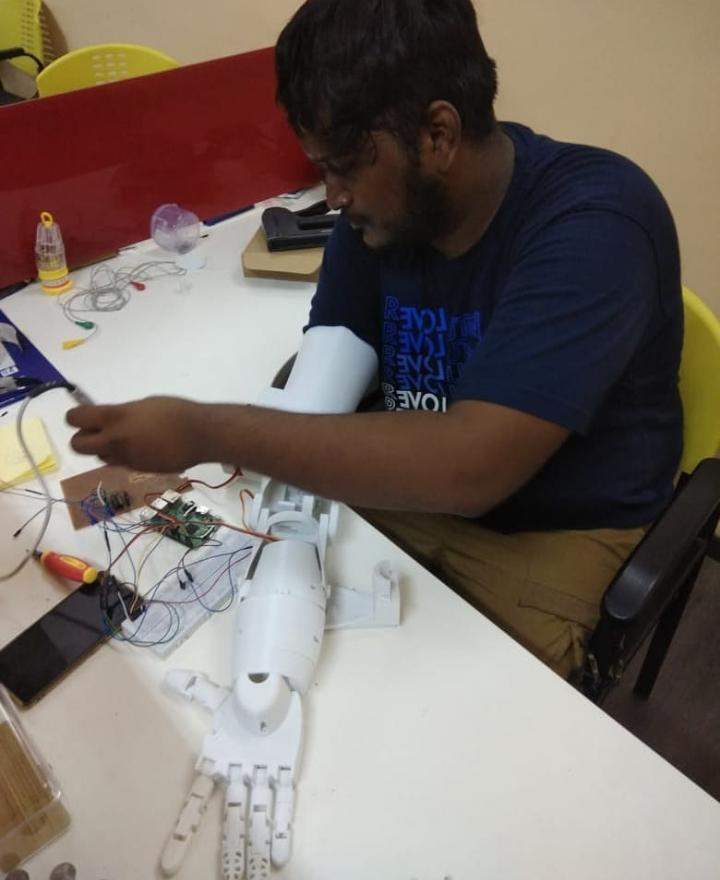 Symbonic's prosthetic brings down the cost by 20x and makes about 95 per cent of the tasks doable. But surely there are other players in the market who are out to achieve the same end goal. The alumni of DG Vaishnav College, who pursued his BSc in Design and Visual Communications from there, says that he is happy there are other entrepreneurs focused on the same problem statement. In fact, he is in touch with a few of them too. "As an amputee, two years back, I had only two options. But now that more start-ups are concentrating on this, amputees will have many more options," he shares. He also points out that usually, start-ups take about three to four years to crack this problem, but they were able to get to a working solution within one and a half years.

Rishi also stresses on their customisable factor, stating that some prefer to have robotic arm-like prosthetic, which they achieve via their 3D printing prowess. "In the upcoming months, we are going to start clinical trials in Chennai or Bengaluru. Also, rehabilitation therapy devices are in the pipeline as we want to create an entire ecosystem around prosthetics," he says and concludes.

For more on them, check out thesymbionic.com