This 20-year-old built a wooden tricycle that's light-weight and adjustable. Check it out

This wooden tricycle designed by Prem Kale can be adjusted to any kid's height and it is the lightest thing on wheels you've ever seen. And it doesn't even have pedals! This is what it's all about.

When Prem Kale decided to drop out of school, his parents were worried for him and they advised him to complete his graduation before 'blindly' following his passion. But Prem managed to convince them that formal education was not for him. Fast forward three years, to 2020, Prem is a 20-year-old innovator and entrepreneur who has built his very own balanced wooden tricycle for kids— that he's named Tipayi — that have no brakes or pedals. "As soon as I finished my class X in 2017, I told my parents that I didn't want to attend college or pursue higher education as I wanted to work in the design industry and become an entrepreneur. While they agreed with me on principle, they wanted me to pursue BCom at least. But I wanted to invest my time in improving my skills rather than wasting it on grades." Going forward, I will not only work on new projects but improve my skills and market my products that are sustainable and reasonable in terms of price

Prem instead pursued a one-month course at Maker's Asylum in Mumbai, a creative space to make your ideas happen. Here, he learnt the skills of carpentry, laser cutting and 3D printing. It was after this that he got an opportunity to participate in the 2018 IndiaSkills National Competition and won second runner-up in the Cabinet Making category. Woodworking was his passion, clearly! So, it shouldn't come as a shock to you that the Pune-born built Tipayi with no mentor guiding him. "I failed many times but I kept trying it. Sometimes, the seat would be too small and handle too big or vice versa. When I was happy with the design, I gave the prototype to a few kids and their parents to try. They liked the product. Finally, in 2019, I put up a stall at a kids' exhibition; most people liked the concept. From then on, there was no looking back. I started my own venture - Vamshycle - and the news of the tricycle spread through word of mouth," he informs.

Based on the colour you choose, the cost of Tipayi is around Rs 3,500 and it weighs around 3 kg

So, what's unique about Prem's wooden tricycle? He explains, "The metal components that I have used are stainless steel so that they don't rust easily. When it comes to wood, I have used Russian Birch Plywood which is lightweight - the tricycle weighs only three kilograms. The wood is durable. The tricycle has three broad wheels - two at the back and one in the front.  These wheels are fitted for proper balance and easy turning. There are no pedals, thus making it easy for children aged two to five years to sit and ride. The seat is also designed in a way that it makes kids feel comfortable to sit on and play. The seat is handstitched and made from foam and cushion material. It can be also adjusted as per the height of the kid." The tricycle can be ordered online and the components can be assembled easily with the help of the instruction manual. He says, "There is a zero maintenance cost for this tricycle as it doesn't have a chain, thus no need for oiling or replacing. And any kid can lift this cycle as it is lightweight, unlike normal cycles that weigh five to six kilos." 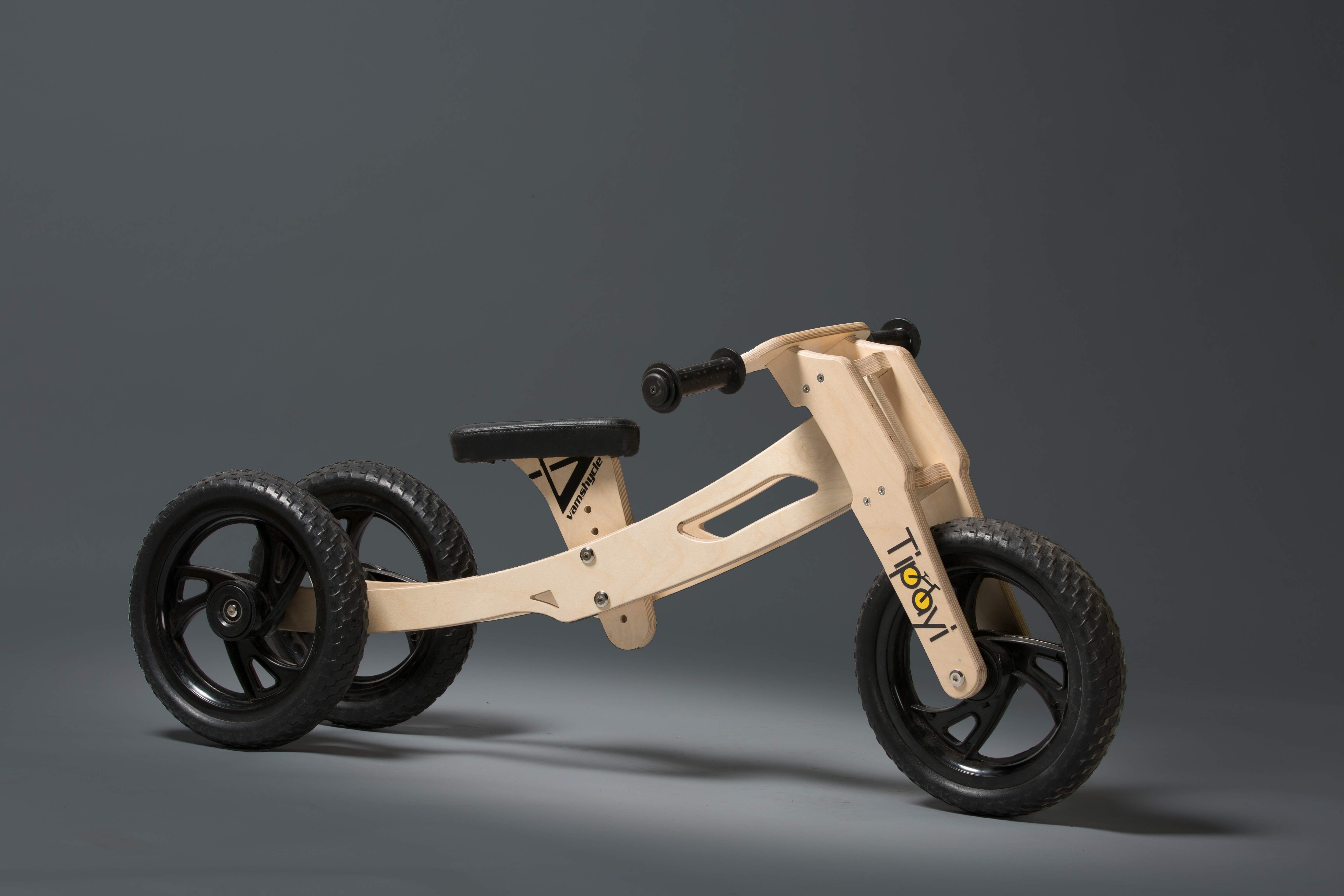 This 20-year-old's innovation has not stopped with this tricycle. Currently, under Vamshycle, he is working on an electric cycle that can be used by both children and adults. While it looks like a moped, the features are like a cycle. He is also designing a bicycle that is made from eco-friendly materials. It contains neither metal nor wood, but something different and he will be launching that very soon. Though he didn't attend college, Prem still believes in updating his skills. He recently completed a course in Industrial Designing with leManoosh - an organisation run by Alexandre Nys, an industrial designer with over 12 years of experience in this field. "He takes individual classes to teach the trends, patterns, software and other changes in the design industry, " concludes Prem.