Tapping into a forgotten identity: The art and intricacies of Sajan Mani

Sajan Mani has borrowed from Dalit poet Poykayil Appachan, the lives of his parents who were rubber tappers and his own life experiences to create his artwork

Where Sajan Mani grew up, he had never heard of an MFA degree or art education of any sort. His art blossomed along with his experiences in a remote village in Kannur where his parents were rubber tappers. He says, “I don’t really differentiate between my personal biography and artistic practice. It is always intersectional. I know there’s always a slight blurring line between personal life and artistic practice, I’m a bit confused about my own.” On October 31, the artist wrapped up his first art show in Berlin titled ‘Alphabet Of Touch >< Overstretched Bodies And Muted Howls For Songs’ where he brought these blurred lines into life in a stunning visual and performative display. Here are the excerpts from an illuminating conversation with the artist:

1. When did you first turn towards art?
I was always interested in the so-called extracurricular activities at school. I experimented with different mediums in school. I was curious about contemporary art and how artists express themselves through different mediums. But I didn't have a chance to experience it first hand. Also, artists in Kerala were considered junkyard addicts at the time! (laughs). They never had this social acceptance.

There was a moment after my graduation where I was introduced to the internet and it actually gave me a lot of freedom. I got to see what artists were doing around the world. I saw what people were wondering and dreaming about. And during my experience with the Kochi Biennale of 2012, which was organised by a lot of youngsters who wanted to experience art for themselves, there was a mood of activism. I also joined this movement. 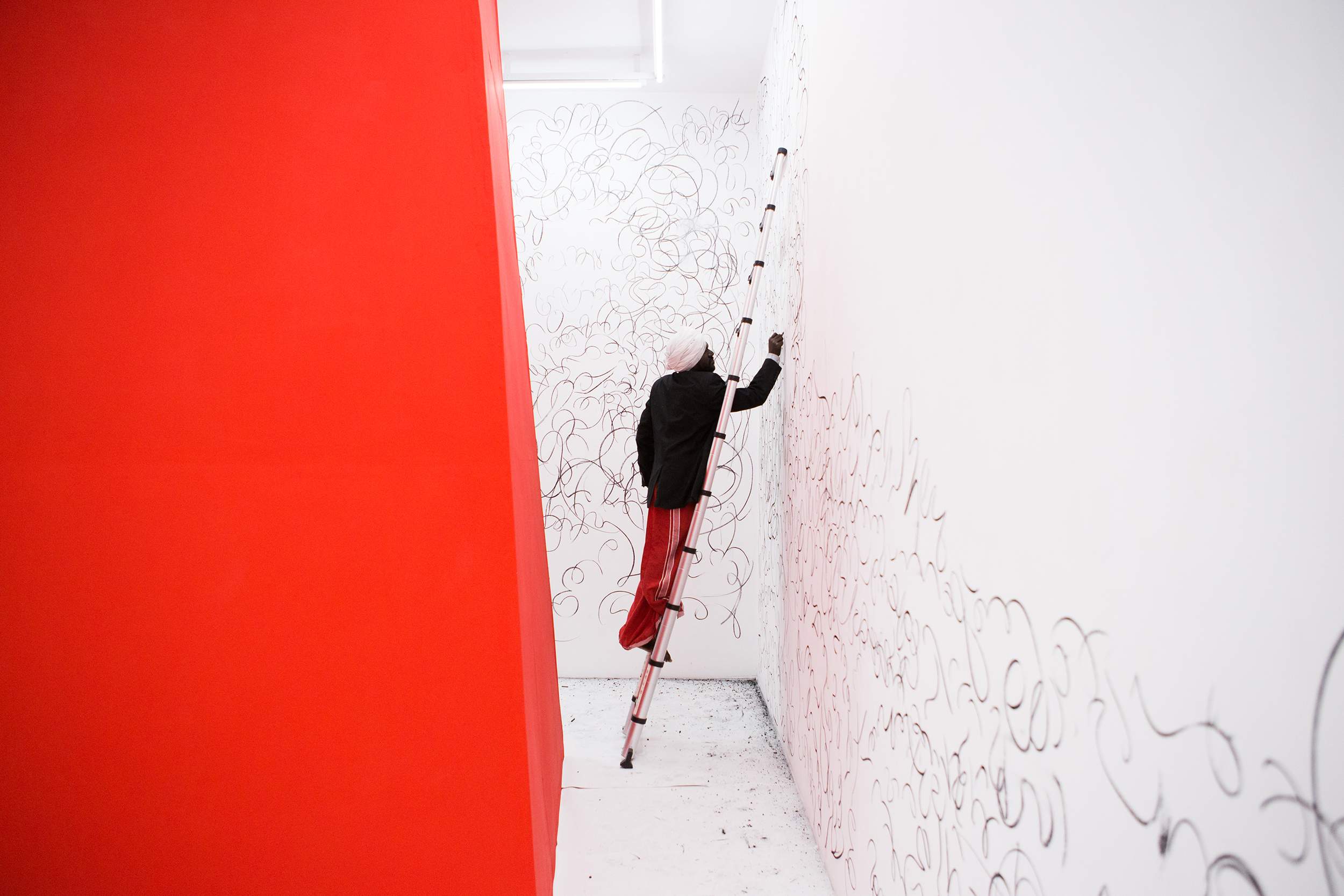 2. Your current show is based on the works of Poykayil Appachan? How has he influenced your work?
This show has many layers. It has a lot of references to my own history and the songs of Poykayil Appachan. He was an artist from Kerala who was a Dalit slave. He started as a Christian preacher and ended up burning the bible and starting a new religion for the slaves of Kerala. There was a moment when he started singing about the plights of Dalit life. He spoke a lot about how there were no words dedicated to his people in history.

He was referring to traditional archiving in Kerala. Even if there are any records, you can see that black bodies were dehumanised, they are almost always seen as bad people. It rejected the existence, humane stories and dignities of Dalit bodies. Appachan was singing about all that and I have used his songs as a medium. I wrote these songs in large sprawling letters and covered entire walls. Basically, I was using writing as drawing and drawing as writing. I did this for two whole days for the beginning of the show. It’s kind of a political excavation in that sense.

3. Rubber plays an important role in this exhibition. Tell us about why it played such an important role in telling these stories.
My parents were rubber tappers for other people’s plantations. I have a lot of memories with rubber: it’s smell, it’s touch, it’s elasticity and the sounds of the plantations. All the senses have a lot to do with my childhood. Not in a nostalgic way, but as an artist, I was thinking a lot about these experiences. 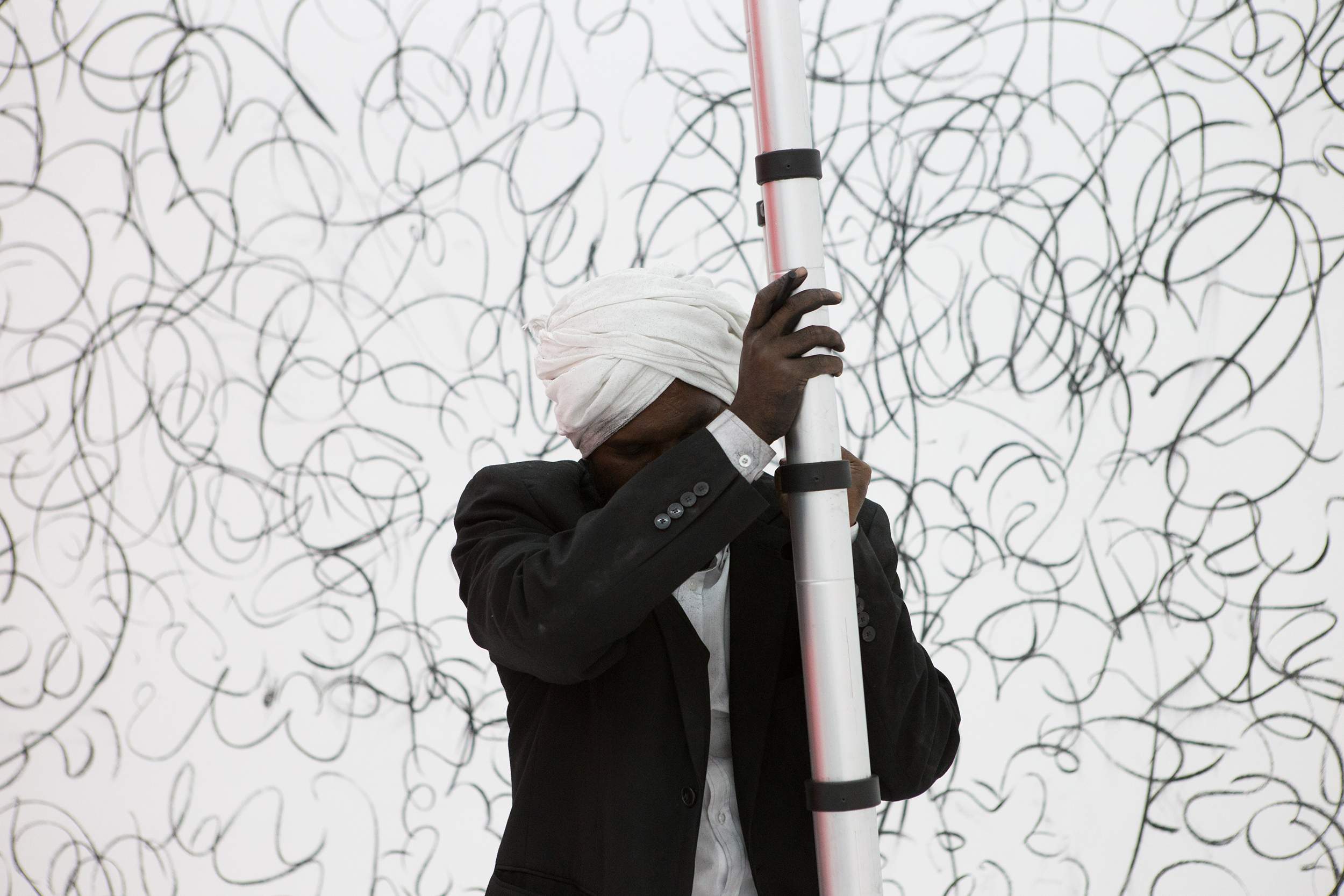 My father would wake up at around 2 am in the morning and go to the plantations and by 6 am, my mother would join him. It was time-consuming work and the labour was very intense. Later, I realised that rubber cultivation was an indigenous knowledge from South America which was looted by colonisers, and just because they had this knowledge, the slaves there were brutally killed by them.

Rubber history is actually a history of human blood. It was one of the main materials of the industrial revolution and everyone wanted it at the time. But at the same time, the indigenous connection to the knowledge of rubber as truly spiritual. They consider rubber milk as blood and rubber as life itself. I was wondering about the politics of touch and the limitations of the body when I created this show.

4. How much have you learnt from witnessing your parents’ lives?
My parents were part of the internal migration that happened in Kerala in which people were moving to other parts like the Malabar coast to get new opportunities and to build a new life. They started from zero. I have a lot of beautiful memories of the village where I grew up, the river where I would swim and the fruits and fish I ate. And I have vivid memories of my parents’ lives doing collective farming and how hard they worked.

My parents never cared about enjoying their own lives as much as taking care of us. They were working, saving money and bought a small bit of land to build their own house. This was a very progressive way of approaching life. In the mix, there were a lot of working class elements and the migrant mentality of ‘We have to win’. And this influenced me the most. As a migrant and as a human, I was always reminded that I needed to survive and win.