The woman recorded the conversation between the doctor and her mother where they insist that she gets admitted to the hospital, take medication and undergo treatment

On June 12, a 22-year-old lesbian student from Kochi sat in a doctor's office as her life choices were being dissected. She was taken to a hospital by her parents without her consent. A doctor from the reputed hospital offered to 'change' her sexual orientation by admitting her, offering medication and counselling. In other words, we are speaking about another instance of conversion therapy. The practice caught our attention again in March when Anjana Harish, a 21-year-old student committed suicide in Goa after being mentally and physically tortured at a 'de-addiction centre' in Palakkad where she was taken against her will by her family.

Dhanya Ravindran, a board member of Queerala, an LGBTQIA+ community in Kerala, who is acquainted with the woman says, "My friend was taken by her family to get 'treatment'. Even after Anjana's case, where a child's life was lost due to something like this, the doctor asked to admit her there. They promised to help the parents by offering counselling and asked her to get admitted there. They also wanted to check if she had any physical issues. She did not agree. When we inquired further, we also found that the doctor who claimed to be a psychiatrist was actually a psychologist." 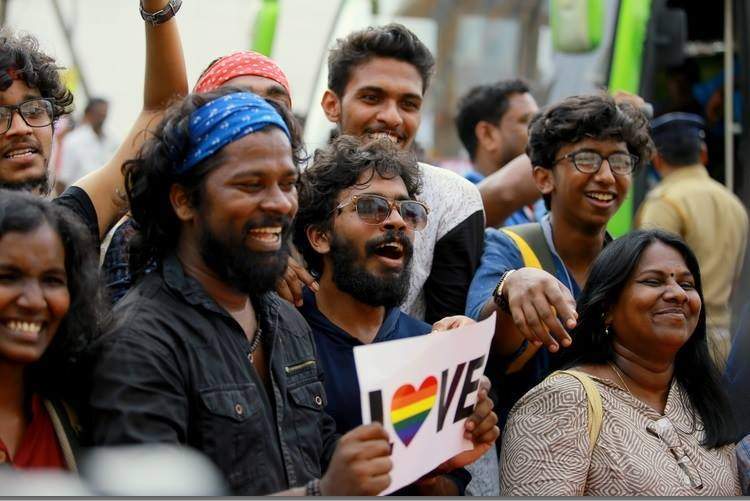 IN SOLIDARITY: The woman reached out to the LGBTQ organisation, Queerala

In 2018, when the Supreme Court decriminalised Section 377, the Indian Psychiatric Society (IPS) disavowed conversion therapy and released a statement completely discrediting the practice. According to Om Prakash Singh, Editor of the Indian Journal of Psychiatry and Professor of Psychiatry at the West Bengal Medical Education Service, "We have given a statement strictly criticising this. And since homosexuality is not a disease or a disorder, there is no question of conversion or any kind of treatment for that. Secondly, even if an organisation is offering such a thing, it is not going to work. They are basically deceiving people. Medication could not possibly alter your sexual orientation."

After Anjana's suicide became public and the video was available online, Queerala sent it to the Indian Psychiatric Society's Kerala Chapter and organised a consultation with them in February. After being informed, they released a statement about their position against conversion therapy. At the same time, they also sent a complaint to the Kerala State Mental Health Authority from whom they are yet to receive a response. As the next step, the organisation plans to submit a writ petition to the Kerala High Court. During the incident that occured on June 12, the girl was able to record the 30-minute long conversation that she had with her parents and the doctor. Here are excerpts from the conversation that Queerala has shared with us:

Mother: Her friends used to visit our home and this girl (girlfriend) also used to come. We treated her like any other friend of hers, but we were wrong to do so.

Queer woman: I'm not interested in any further counselling and that's not going to work, hence I don't want to get admitted here

Doctor: Yes, but your parents brought you here. Together, they took a decision that we cannot leave it like that and they decided to admit you here for counselling. We can talk during our counselling sessions about it. So you need to get admitted here for the counselling.

Queer woman: Is it mandatory to get admitted in the hospital for detailed discussion?

Doctor: Yes, it is required for further discussion. We can only come to a conclusion after a couple of sessions and for that you need to get admitted here. Since your family brought you here, we cannot accept this.

Queer woman: I'm not interested. As I said, I know about myself and I have a better idea about my life. Besides, what is my family’s aim? Why did they bring me here? What is their motto?

Doctor: To change this, your interest in girls. 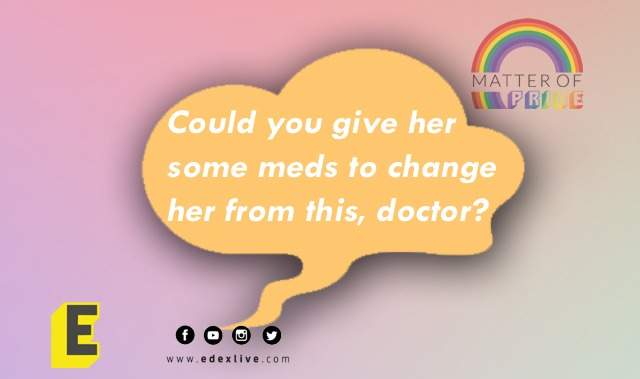 Mother: You don't need to come here with that girl. Doctor, just do something and change this.

Queer woman: What do you mean by, 'change this'? What are you trying to say to my mother?

Doctor: Let's get admitted here and we'll talk in detail.

Queer woman: So what procedures will you be performing after getting me admitted here?

Doctor: We'll talk about it from different angles.

Mother: If you're not interested, I'll tell your father and he'll make you interested in this discussion.

Doctor: Okay, let's do that, tell her father about her lack of interest in this. Let's talk to her father and also to your immediate relatives about this and let everyone know about it.

Queer woman: No issues at all. I myself will tell everyone about me and if required, I'll write about it in some social platform as my coming out post.

Mother: No need to tell anyone. Could you please help me change her from this by giving her some medicines, doctor?

Doctor: Yes, we'll definitely try. Again, we can't give any guarantee in such issues.

Doctor: Okay, so we'll investigate why you're not interested in intercourse with a man. Besides, have you had any gynaecological changes or some other issues like that? 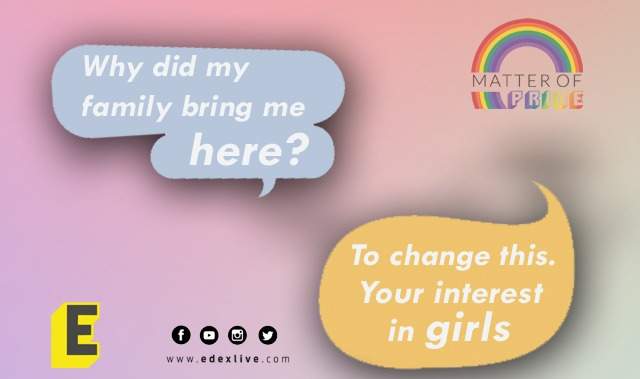 Queer woman: I've thoroughly observed myself and I don't have any such gynaecological changes.

Doctor: Okay good, so you're not having any such problems. Also, we'll check for any other problems.

Queer woman: What other problems? I've told you a thousand times that I don't have any problems. After seeing me, do you think that I'm not a girl, doctor?

Doctor: No conclusions can be drawn from appearances alone, we can scientifically prove everything with ample tests.

Doctor: Prove that you don't have any issues in having intercourse with a man.

Queer women: Okay, so what about my mental state or my interest?

Doctor: I'm an expert in mental related things and that's why I'm here.

Queer woman: Whatever! I'm not interested in getting admitted here and I want to leave.

Doctor: You have to get admitted here and we need to do some tests to check what is wrong with you. We need to check your endocrine state to check why you're talking like this. We have Gynaecology and all other departments here. Also, you need to get tested at some labs and we have contacts of good labs as well.

Queer woman: If you want to test anything, I'll cooperate and I'll prove that you're wrong. Besides, I'm pretty sure that nothing is going to change because of these tests.

Doctor: Do one thing, it's very simple, talk about everything to her dad, discuss with him. Let him decide and convince her to get admitted here.

Queer woman: My dad is basically a bit violent, so I don't tell him anything directly. He might attack me mercilessly.

Doctor: Come tomorrow with your dad and get admitted here. We'll conduct all the tests after admission. 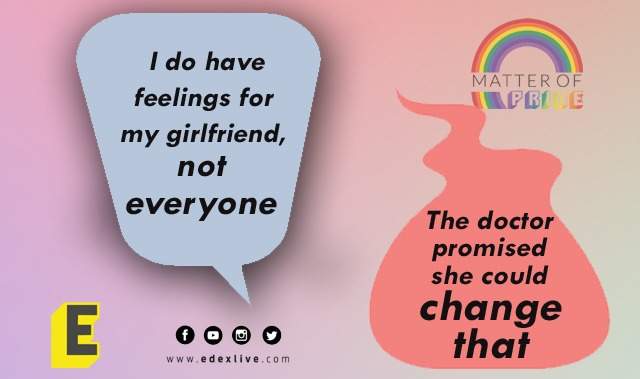 Queer woman: Let's call him and tell him. I can't waste my time on this anymore. I'm joining a new company next week and I can't take any leave in the near future. Doctor, please explain to us how you're going to change this?

Doctor: I'm not ready to reveal it to you now.

Queer woman: Okay I'm also not ready to do these counselling sessions here and I'm not interested at all.

Doctor: Okay, I'll write in the report that you're not ready to obey or listen to your family or doctors. We'll admit her tomorrow and will conduct all the tests with the counselling sessions.

Queer woman: I do have feelings for my girlfriend, not everyone.

Mother: Yes, the doctor promised that she could change that.

Doctor: Yes, it is possible to change it.

Queer women: Show me proof that you will be able to change my sexuality.

Doctor: I'm not giving you any proof now. I don't have much time to waste. If you're okay, come back after discussing it with your family.

Queer woman: Same here, even I don't have a second to waste on this.

Doctor (to Mother): I will try to change this, but no 100 per cent guarantee

A thousand horror stories can be conjured up as to what events followed this exchange. Thanks to her strong ties to the LGBTQIA+ community in Kochi and a complete understanding of her own rights, the young woman refused to be admitted to the hospital or take any medication. She continues to live in her parents home, defiantly fighting marriage proposals and the pressure to undergo therapy. However, her story reminds us of the shameful bigotry that continues to operate behind closed doors under the pretence of professional names and appearances. What will it take to bring them out of the closet?