Unlike Charles Dickens' famous opener - It was the best of times, it was the worst of times - there seems to be only a 'worst of times' at the moment. Our lives are being ruled by an invisible virus that is going around making people sick - killing many of them - and scared and wiping away their happiness. Before we bat an eyelid, the country was under lockdown, the economy was closed and in a jiffy, many were left jobless and homeless.

But as doomsday as this situation can get, this time should also show us that hope springs eternal. Amid the fear and the chaos, hoards of youngsters across the country have come up with fundraising campaigns to help those in need. This week, we take a look at four such fundraising campaigns that are helping the underprivileged continue with their education.

Mentoring, therapy, education and everything in between

Disha Panda and Haneen Farid were excited to have raised half of their goal amount when we spoke to them. "We raised a decent amount in a short span of time. I'm quite happy and excited," Haneen tells us. A month ago, this 12th grader could never have fathomed an amount as large as the one they set as their goal - `3,35,000. "It is a lot of money. I have never seen so much money in my life," she says. The duo, who are currently participating in 1M1B's Future Leaders Program, kickstarted a fundraising campaign on Impact Guru a few days after the lockdown began to fund the college education of 14 underprivileged girls in Karnataka. Apart from funding their studies, the duo also organises mentorship and career guidance sessions and therapy sessions for free. They are working along with Bengaluru NGO Sparsha Trust to achieve this. 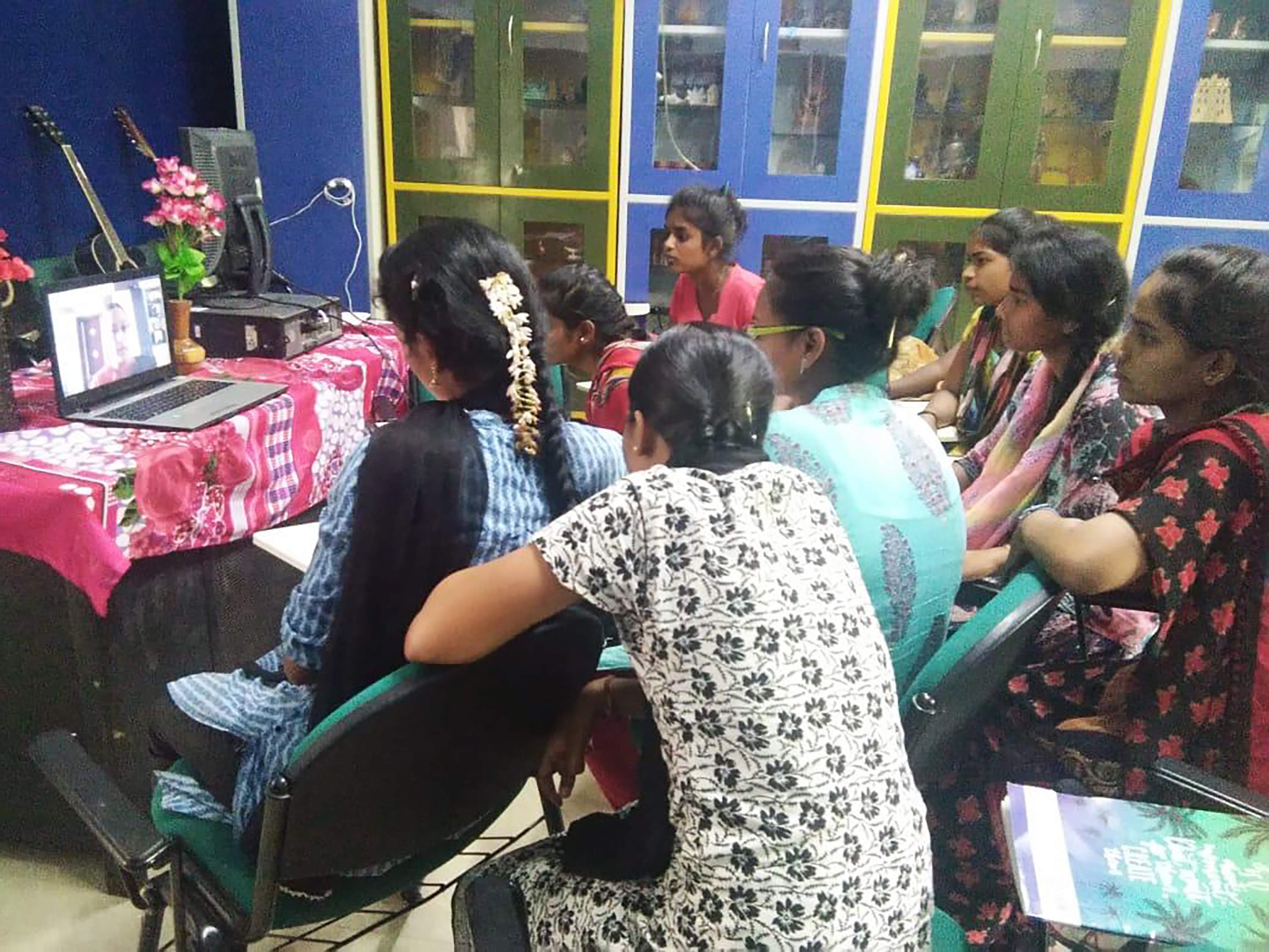 The girls from Sparsha Trust during a session

Haneen tells us that the idea to start this campaign hit her from a project that she had done previously. "As part of this project, I was interviewing a few women who work in the corporate sector in Bengaluru. There, I was introduced to a particular woman who shared her life story with me. She was born and raised in a slum in Mumbai, before she bagged an internship opportunity and moved to Bengaluru," she says, "We knew that there were many young talented girls who are unable to achieve their goals, owing to financial constraints." Disha tells us the rest, "We were adamant to take up this cause. We do not want money to stop anyone from achieving their dreams. That was how we started the campaign."

They then took it a step ahead by adding mentorship sessions. "We figured out that talking to successful women from career areas they're interested in would help them more," says Haneen, "That was when the social media head of our project, Bidipto Das, asked us if we could include therapy sessions too. Therapy is a necessity but not easily accessible to all, for sure." Even though these 16-year-olds talk to the beneficiaries over the phone and arrange Zoom sessions, they hope to one day meet everyone in person. "Since all of us are around the same age, it is easier for us to connect with each other," says Disha, "In a lot of ways, our lives and issues are also quite similar."

Making changes, one school at a time

The lockdown began almost abruptly. All of a sudden there was so much time and so little to do. On one hand, people brewed Dalgona coffees and baked banana bread and posted incessantly on Instagram. But on the other side of the spectrum, a few struggled to get even the daily necessities like rice, oil and sugar. In many cases, it took the youngest of the lot to notice the struggle. One such group that took notice were twelfth graders from Pallikoodam School, Kottayam.

In the second week of April, eight of them — Malaika Mammen Mathew, Ajar Ajay Srivastava, Janani Anna Babu, P Gauri Menon, Dhanya Sony, Reba Phillip, Aditya Kurien Chacko and Punnoose Punnen — kickstarted a crowdfunding campaign with a city NGO called Tiny Seeds to help the families of underprivileged government school children, whose parents are daily wage labourers. "Since the beginning of the lockdown, I have been reading a lot about the issues that the daily wage labourers and the migrants in the country face," says Reba, "So, we wanted to do something to help them out." 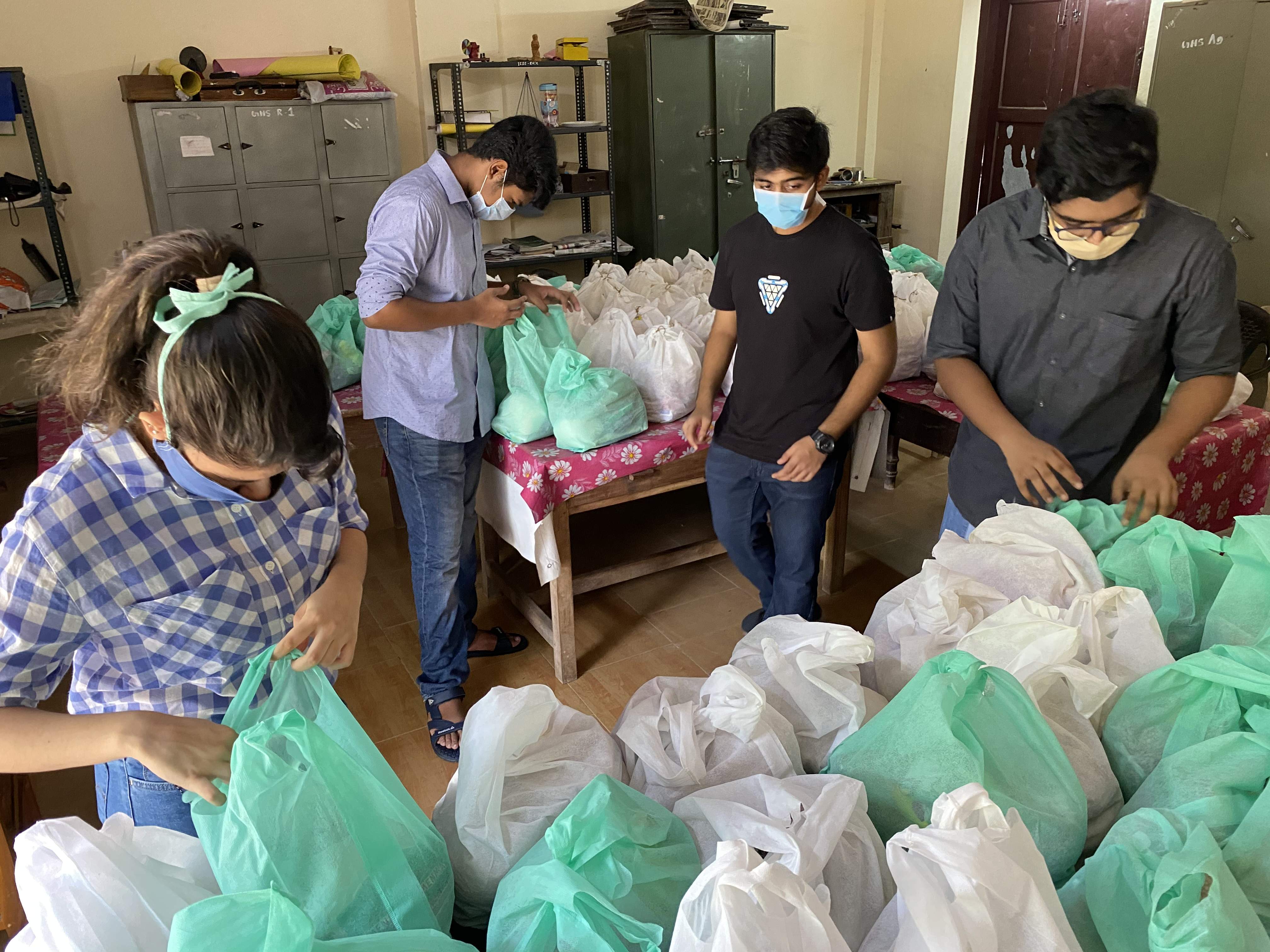 The students tell us how they then approached Tiny Seeds, who helped them set up the fundraiser on their page. "The NGO helped us identify 800 families of students who study in five government schools across the city," says Reba. She tells us how, in just a month, they managed to raise `5 lakh. "The primary contributors were our parents, their friends and people who got to know about the campaign through word-of-mouth," she says, overwhelmed.

Providing the necessities was the next step. With the help of the NGO, these students conducted donation drives in these five schools, where they distributed groceries that are not available for free through the ration shops to the students' families. While the social distancing norms prevented the students from being present at all the donation drives, they made it a point to at least attend the ones near their houses. "This was an eye-opener for most of us. We got to see a stark contrast between their world and ours," says Reba.

Since 2008, Deepam, an NGO, has been working to educate some of the most underprivileged children in Chennai on Spoken English and Computer Literacy. When COVID-19 changed the way the world worked, it also took these children out of the temporary classrooms that they had. So, the work Deepam represented also changed. Following this, the organisation launched a crowdfunding campaign to support the students and their parents in the 12 centres that they work with.

Rama Rao, a volunteer at one of Deepam's centres — Olcott Memorial School, Besant Nagar — says, "Our focus has completely shifted to a question of survival and to the children and their families. We are trying to reach out to these families and help in any way we can." They began by putting together a link for people to donate money and resources. Members of the group have been circulating this among friends and families since May 17. In just five days, they raised `3 lakh. They now have a target of `5 lakh which may increase, depending on the number of children in need of help. While each volunteer is handling one or two classes in there assigned schools, their help is not restricted to just the students there. From a donation drive

In the short term, Deepam is working to reach out to children and parents. They have picked out the neediest of families and are trying to support them with rations and other essentials. The process started by seeking the help of the headmistresses in each of the schools and reaching out to the children through the school. Rama Rao says, "Unfortunately, a troublesome offshoot for our work here has been that most of these households do not even have enough money to recharge their phones for us to contact them. So, the first step is to help them with their mobile connections to get a conversation started."

In a few of their centres, they have partnered with local kiranas to distribute rice, dal and household items like toothpaste to the families. The idea is that the volunteers in each centre will engage with the kiranas to make packets of essentials and distribute them in that area. It's a win-win arrangement for the small stores; they are encouraged to do the packing and drop them off at the schools where the designated beneficiaries can pick them up.

Rama Rao says, "In the long term, when the schools reopen, our concern is how we can ensure sanitation. Since Class X exams start in June, we have already started distributing things like soaps, masks and sanitisers in the schools." They have already dropped off 100 masks, 3 sanitisers kits and 2 bottles of soap to date.

The youth to the rescue

'Never doubt that a small group of thoughtful, committed citizens can change the world' is the motto of the International Association of Students in Economic and Commercial Sciences (AIESEC). This world’s largest youth-run organisation works in collaboration with the UN to promote the 17 sustainable development goals. And at a time when the youth is most in need of our help, the organisation has set up a crowdfunding campaign, Mission Madras, to help those who are most in need of support during the Coronavirus crisis and its aftermath.

The campaign revolves around 3 focused projects of the organisation: Caravan, (based on quality education the fourth Sustainable Development Goal (SDG)), Project Wonder Woman (based on SDG 5: Gender Equality) and Operation P.A.W (based on SDG 15: Life On Land). "We have tied up with NGOs in Chennai and have been contributing actively to ensure that we get volunteers who are furthering the cause. Obviously, it's on hold now due to COVID. We can't risk our volunteers. But we will continue our work as soon as the situation is safer and we need public support to do this," says Sujit A, the point of contact for the mission.

An AIESEC volunteer with the students

He continues, "With Project Caravan, we provide the volunteers with accommodation and all the facilities that they need. The volunteer will be focusing on a particular region and teaching underprivileged students or those who are disabled. There are particular NGOs with which we work." The aim of the project is to ensure that all learners acquire the knowledge and skills needed to promote sustainable development by 2030.

In its truest sense, the project aims to create meaningful changes at one of the most difficult periods in the country's history. Their target is to collect a sum of `3,00,000 over a span of three months, with `1,00,000, each aimed at supporting the respective causes.