I took a flight from Bengaluru to Chennai during COVID. This is what I went through

From steps to ensure social distancing to willingly giving away personal information, the new normal of flying is a whole lot different. Here's everything you need to know

It had been over a month since I began trying to fly from Bengaluru to Chennai. The lockdown played spoilsport to my plans of moving to a new city and beginning a life here (Or is it there?). I had been stuck in Bengaluru ever since the lockdown began, unable to go home or anywhere else. When I finally learned about domestic flights being resumed, I jumped at the opportunity and booked myself out of Bengaluru at the earliest.

Taking a flight now was like going to war, as I'd often told my friends and colleagues before the trip — you needed to fill up multiple forms, give your personal information away to all and sundry, multiple times, and had to ensure certain things are in order before you even take the trip. This is what I had to do.

Step 1: You need to get the Aarogya Setu app

My journey actually began a week before I even entered the airport - when I downloaded the Aarogya Setu app. After taking the self-assessment, I was thankfully declared 'green'. But the road to the airport was bumpy. The first flight that I had booked from Bengaluru to Chennai was cancelled (Thank you AirAsia. We heart you). I had to immediately book another - IndiGo flight 6E6012 - which, thankfully, did not get cancelled.

At #BengaluruAirport first asked to show Aarogya Setu status. It was green. The showed boarding pass. This is just after exiting the cab and before even entering the terminal.

Step 2: Keep checking to see if your area goes from green to red/orange

During the week leading up to the journey, I kept checking Bruhat Bengaluru Mahanagara Palike's (BBMP) portal whether my area was declared a containment zone. Other city corporations have similar apps/web updates, so look out for those. I also had to ensure that I took care of myself and didn't show any symptoms for COVID-19.

Step 3: Get your destination state's e-pass

After completing the web check-in, I applied for the Tamil Nadu e-pass where I had to enter my flight details, including my seat number, as well. I took print outs of all the documents (boarding pass and e-pass) and kept my Aadhaar Card handy.

All set to fly

On D-Day, clad in a face mask and gloves, I booked an Ola cab to the airport. Before stepping out, I decided to live tweet my experience. On reaching Bengaluru's Kempegowda International Aiport, even before entering the terminal, I was first asked whether I had downloaded Aarogya Setu. When I said yes, I was asked to move ahead to the designated pathway, which had floor stickers to ensure social distancing is maintained. An airport official checked the status of the app and I was asked to move ahead. At the end of the path, a thermal screening machine and a huge television screen greeted me. An official asked me to remove my spectacles and pull down my mask. She did a thermal scan, I was cleared to move ahead.

At the departure gate, ID and boarding pass was checked from behind a transparent screen. Guards wearing full PPE. Had to scan boarding pass at gate itself. Had to pull down mask for identification. Heading to baggage drop now.

At the terminal entry, a Central Reserve Police Force (CRPF) official stood behind a transparent screen, wearing PPE. I was asked to show my ID card (Aadhaar, in my case) and scan my boarding pass. I had to pull down the mask again for identification. When I went forward to drop my baggage at the check-in counter, I was asked to show the e-pass and boarding pass. The airline counter staff, who was behind a transparent screen, took my check-in baggage (the limit of which was 20 kgs) and gave me a bag tag sticker to attach to my boarding pass. This process was quite hassle-free and I was quickly allowed to move to the security check.

Before entering the security check area, I was again asked to scan the boarding pass by a CRPF official from behind the transparent screen. Like the terminal entry gate, I was again asked to pull down the mask for identification. After putting my belongings through the scanner, I went to get frisked. The official also wore PPE, but only over the head. She did a full-body scan without touching me, frisk-free. The boarding pass was not stamped. I was allowed to leave and collect my belongings.

Just got done with security check. It went smoothly. A CRPF official checked the boarding pass again from behind a transparent screen. Had to pull down mask and show face. Again.

Life behind a big, blue mask 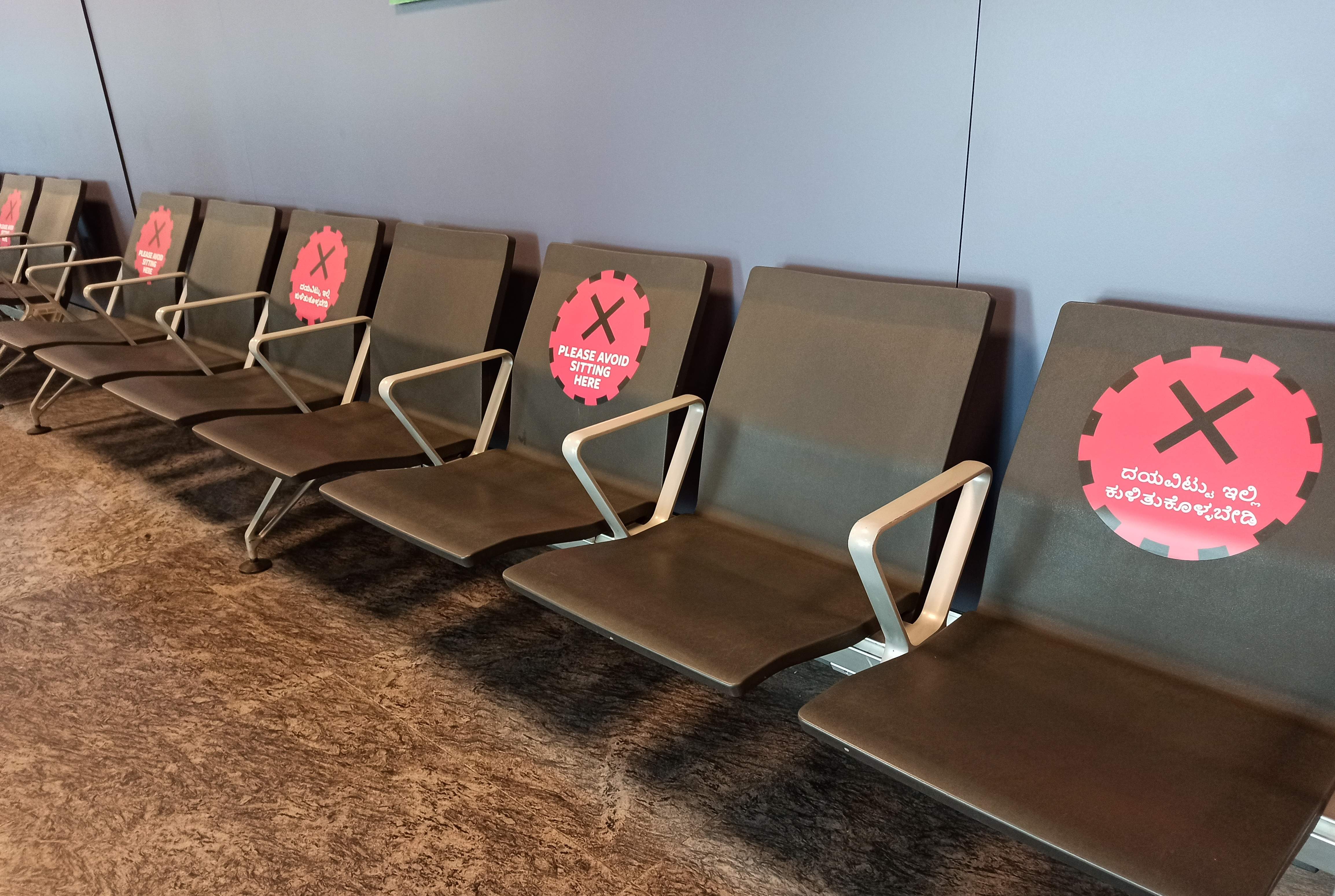 Wearing a mask throughout the journey, no matter how long it is, is mandatory as the repeated announcements at Bengaluru airport will drill into your head. I began moving towards my boarding gate after a light snack at an airport restaurant (First time in months!). Throughout the terminal, alternate chairs were marked, asking people not to use them to ensure social distancing — as if finding a seat at airport terminals isn't tough already. At the boarding gate, I sat in one of the unmarked chairs. A ground staff member from IndiGo checked the boarding pass and e-pass again before another staff member handed over a PPE kit. The kit contained a mask, a face shield and two pouches of hand sanitisers. The passengers were asked to sanitise before using the mask and face shield. The names of some passengers were called out and they were given additional PPE, which included a body cover. On asking them why, I learned they were the ones occupying the middle seats. The additional PPE was to compensate for the lack of social distancing, perhaps. 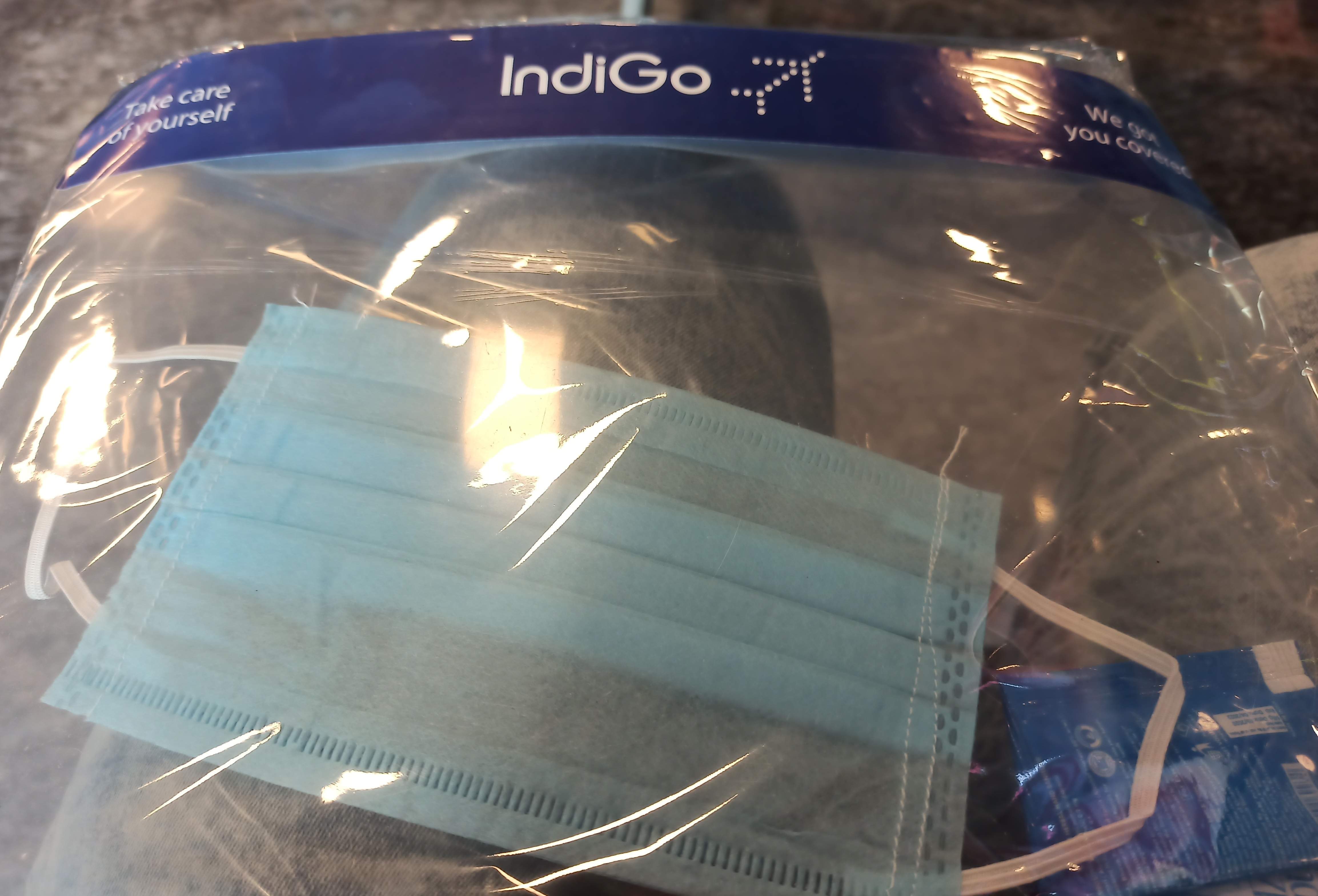 Back in a plane. With PPE

The bus ride to the aircraft was quite different. For one, it wasn't packed to the brim and I got a place to sit for the first time in my life. We were asked to put on face shields before entering the bus. However, no one asked us to change the mask. I continued wearing the mask that I had worn since the beginning of the journey. On boarding the aircraft, I saw that the cabin crew was dressed in full-body PPE. The pilot announced that the aircraft was sanitised before the trip and asked people to follow social distancing norms and wear masks and shields. There were no delays - the flight took off on time and landed before the scheduled arrival time. 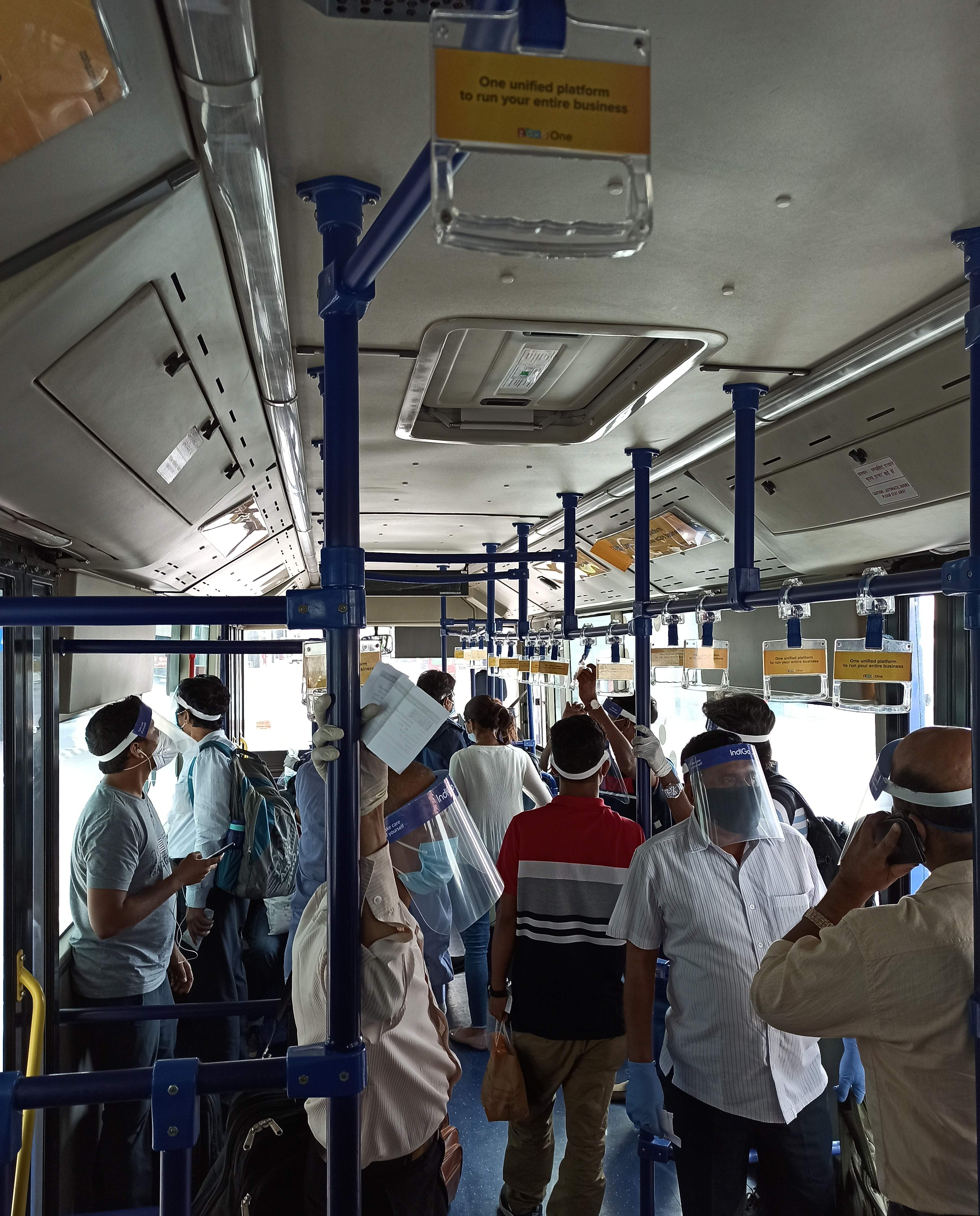 Land ho. And what came after

After landing at the Chennai Airport, we could quickly disembark. We were asked to dispose of our masks, gloves and shields in specific bins marked for biohazardous waste. On entering the terminal and walking a bit, I had to stand in a queue with my co-passengers. Airport officials did another thermal scan and stamped the right wrist of those entering Chennai for home quarantine. Those taking connecting flights from the airport were not stamped and were only thermal scanned. At the baggage collection belt, yellow markings were made on the floor to encourage social distancing. After receiving the checked-in baggage I noticed that it was wet - the officials had sprayed disinfectant on the bag. 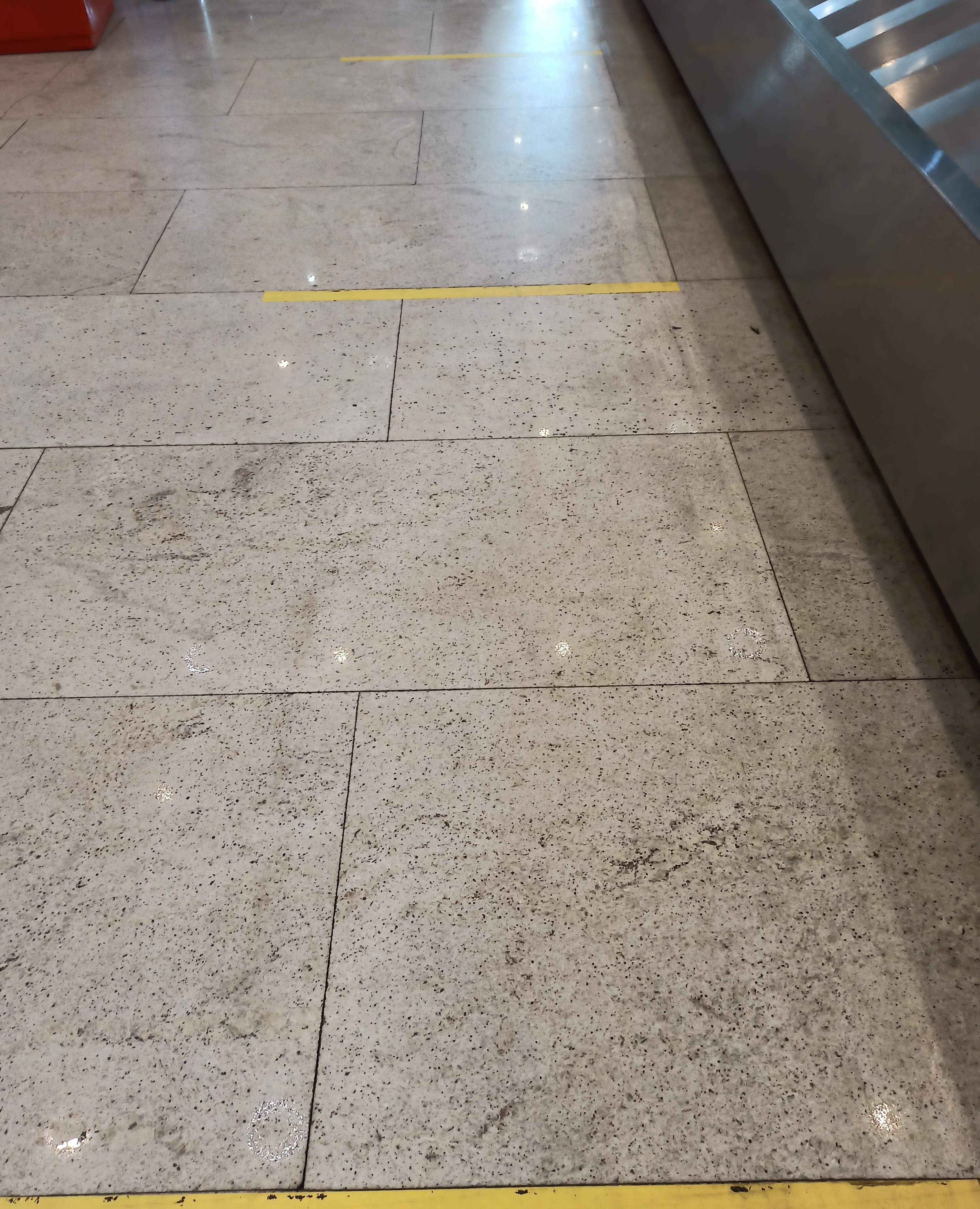 Driving away. Why taking a cab is a lot better

Near the arrival gate of the terminal, several officials had set up shop to help people update the driver details on their e-pass. I was able to do this process online, and so, I first booked an Ola cab, got the details of the driver (name, vehicle number, type of vehicle) from the app itself. When my e-pass was approved, I had received a message on my phone with the link to get the pass. An option to add the driver details had been there at the time and I clicked on it to fill the details. After filling the details, I got a QR code. The officials at the e-pass counter asked me to step out of the terminal. A CRPF official scanned the QR code (from my phone) and asked me to exit the terminal.

Air travel during the time of Corona. Check!