Water Matters: Why these 53 panels will make you look at H2O differently

Water Matters, being held by the US Consulate General at the Periyar Science and Technology Centre till March 31, consists of 53 select panels that revolve around sustainable water management

We are told almost every day, by newspaper reports, various in-depth studies, and even doomsayers who believe that the apocalypse is near, that water, like all other natural resources, will be depleted if we do not come up with better ways of replenishing and conserving it. But if you attend the Water Matters exhibition that is being organised by the US Consulate General, Chennai, in collaboration with the Smithsonian Institution Traveling Exhibition Service (SITES), and Care Earth Trust at the Periyar Science and Technology Centre, this reality may hit you hard, but also leave you a little hopeful about the future. A panel on the DusiMamandur Tank, one of the tanks created to maximise utilisation of seasonal river waters before they reached the sea  (Pic: Seetha Gopalakrishnan, Care Earth Trust)

How? Owing to the 53 panels that seek to explore opportunities in sustainable water management in addition to looking at real water challenges like water scarcity, pollution, the cost-effectiveness of current water management solutions, etc. "My team and I have been working hard for over two years to bring this exhibition to Chennai as we believe water is a vital resource and more discussions need to be focused on it. Smithsonian Institution-curated exhibitions are at the centre of the Water Matters initiative as the latter leverages the Smithsonian's travelling exhibition H2O Today and builds on the Smithsonian's long history of partnership in South India," said Lauren Lovelace, Consul, Office of Public Diplomacy and Public Affairs, adding, "Dr Doug Herman, Smithsonian Senior Geographer, even travelled to South India in 2019 to lead the Water Matters curatorial process — working with local environmentalists, historians and other stakeholders. Since he has studied how indigenous people in the United States have made use of water innovatively, he brought those insights to India too."

Additionally, the exhibition also seeks to tap into 'water opportunities', like the temple tank model for example, according to Lovelace. "Groundwater recharge is essential for a water ecosystem to keep working without a halt and we had two experts come in from the United States to discuss this aspect with many policymakers in Tamil Nadu. It was a fruitful exchange and we believe it will result in substantial, practical collaborations," she said.

A panel on the Grand Anicut, Kallanai, which is believed to be one of the oldest water-diversion structures in the world that is still in use (Pic: Ashwin Kumar)

Some of the panels that caught our attention were the one on South Indian Traditions and the Eri (Tank) System. The former is about the various technologies and management systems to maximise the capture and retention of water while the latter revolves around tanks. To maximise utilisation of seasonal river waters before they reached the sea, a cascading system of earthen channels and reservoirs (tanks) were created. Thousands of these water bodies were constructed based on sound knowledge of local conditions, using local materials. Once each tank reached its capacity, the outflow was designed to enter the next tank, and so on down the chain. These tanks—called eris in Tamil Nadu—mostly served as irrigation but also acted as flood-control systems, preventing soil erosion and recharging groundwater. This provided water not just for humanity but for the flora and fauna of the area, maintaining the village ecosystem. 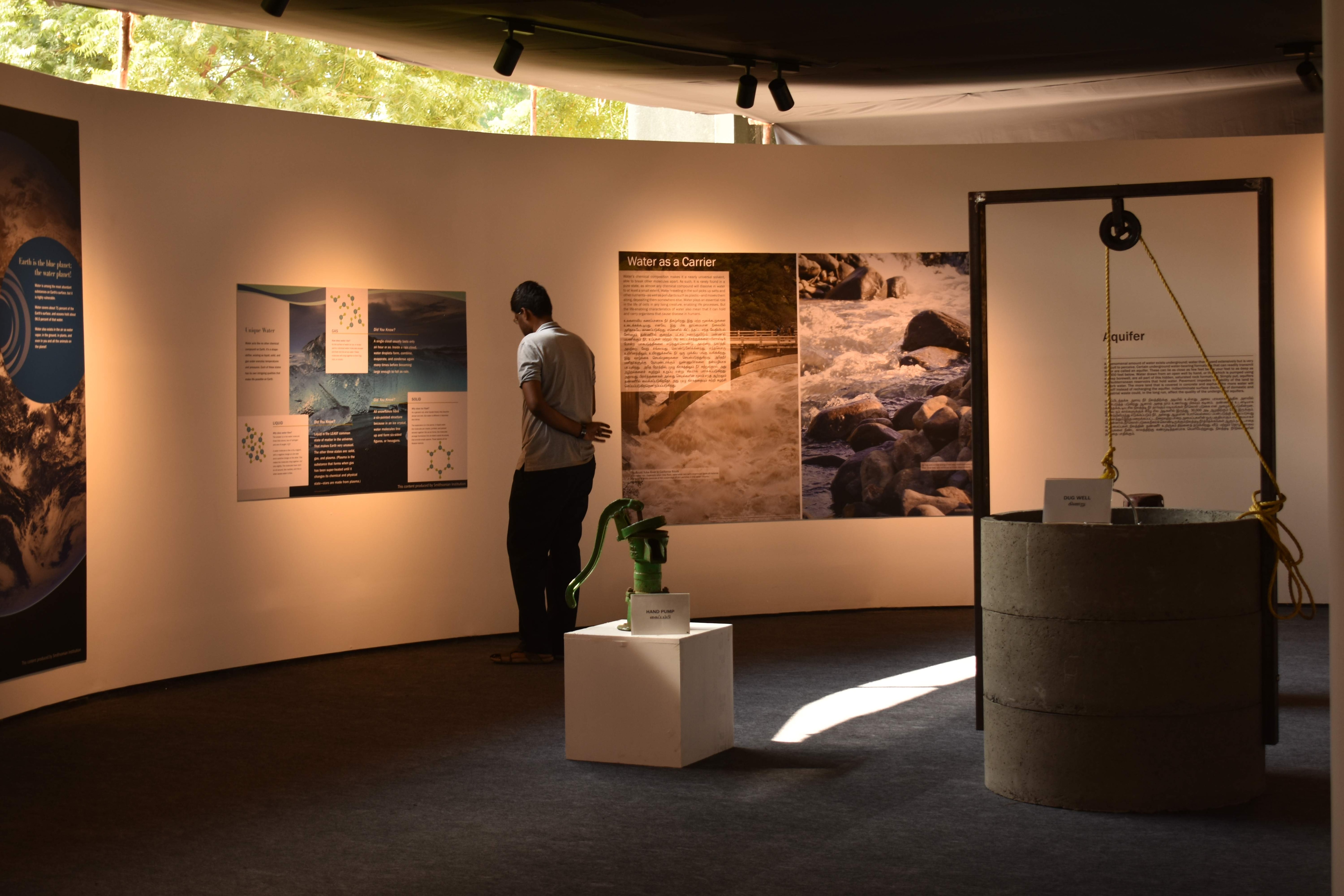 A visitor at the exhibition. A dug well exhibit, which is rarely seen in cities
these days, is also on display

There were also interactive panels, for example — in Women and Water — which showed the burden of carrying water fell on women who were primary water bearers in many areas in Tamil Nadu and India, two kudams (pots) were placed for children to understand how heavy these were with and without water. Apart from panels, the exhibition also consists of a series of lectures, demonstrations, curated talks, musical performances and storytelling sessions. "We also had a Water as Art session on one day. We wanted to show how water is an absolute asset and can be used in many applications," Lovelace commented, telling us that she expects over 25,000 students to attend the exhibition which runs till February 29, 2020, and that even families are welcome as she expects them to have serious debates on water even at the dining table after visiting this exhibition.

The exhibition has been extended till March 31, 2020 by popular demand. Catch it as soon as you can!