SoCh a great idea: How Anusha Bharadwaj is transforming the lives of Telangana's young women

SoCh For Social Change is reaching out to young women and adolescent girls through their programmes to let them experience life in the social sector and cash in on their yen for it. Interested?

One of the most successful programmes that the social enterprise SoCh For Social Change runs is Oorja. The word 'oorja' translates to energy, which is also the motive of the programme. It is to fill young women in rural areas with so much energy and empower them with tools like life skills so that they can take on all the challenges that come their way. One such young girl from the tribal belt of Andhra Pradesh was enthusiastic about feeding off this energy, but, as they say, bad news comes in threes. Not only was she kept from signing up for the camp, she was being forced to not just marry, but even drop out of school. In a last-ditch attempt, this youngster was able to convince her parents for the camp. After all, this was going to be her last wish before she drops out, her parents had to concede. But then, she turned up for the second edition of the camp as well.

And how did that miracle happen? 'I used the same negotiation skills that I learnt at the camp to negotiate with my parents to let me study till class X. And after class X, I am going to negotiate with them to let me study further.' And even today, when Anusha Bharadwaj, Founder and Director of SoCh, recalls this story, she is thrilled by the transformative power which SoCh wants to build in young women and girls so that they can take charge of their own lives and help other women along the way too. "This story will remain with me forever. It is beautiful how they learnt to apply these skills in their lives," says the social entrepreneur. And there are many such success stories coming out of this organisation and we try to find out the secret behind their success. 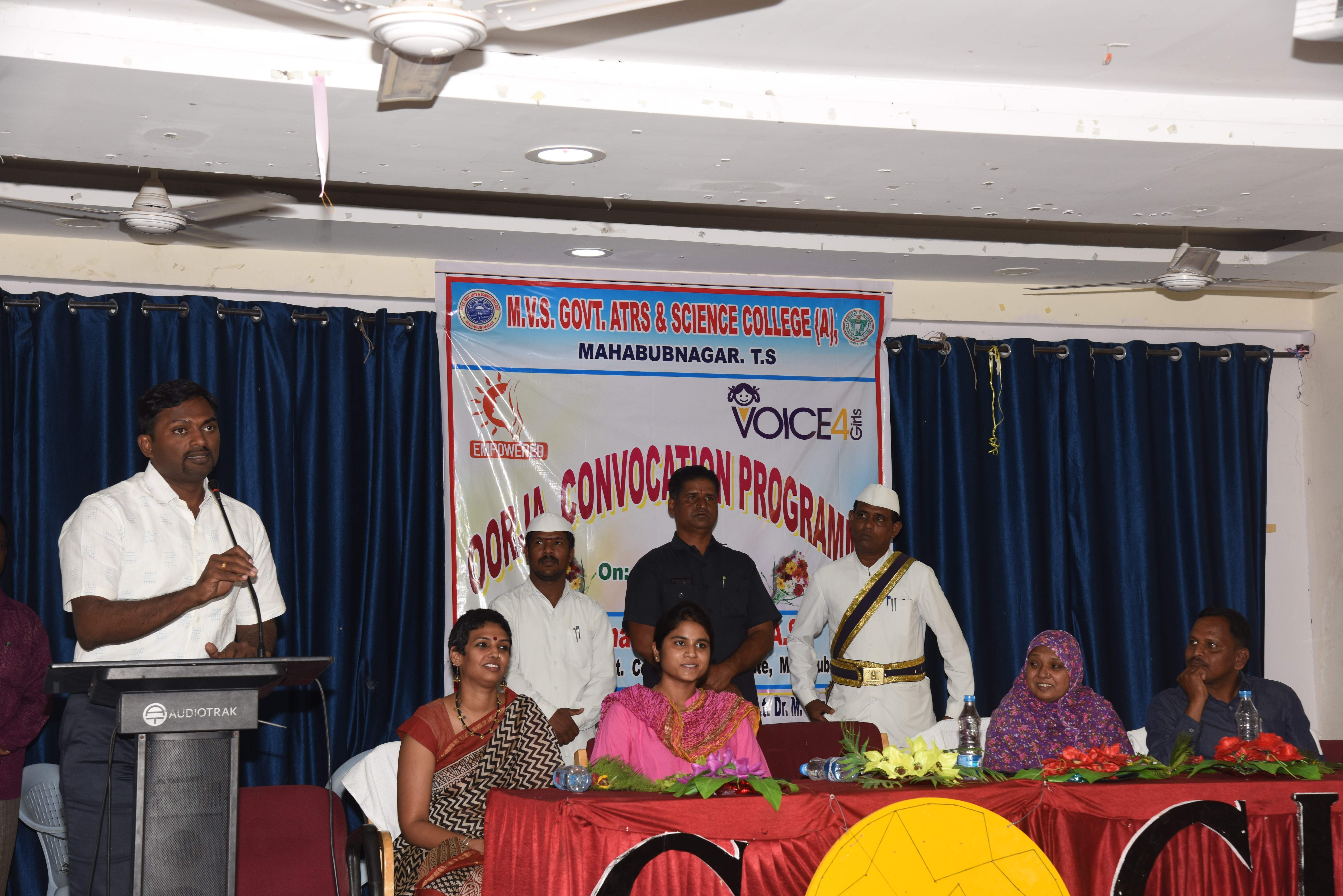 One of the convocations of Oorja | (Pic: SoCh)

Clarity in vision
Anusha Bharadwaj had already made her name in the social sector thanks to her association with VOICE 4 Girls, the voluntary organisation that imparts knowledge to marginalised girls on topics like health, self-awareness and so on. So we wonder why this 37-year-old felt the need to start SoCh in April 2017. "So many huge organisations often want to do everything and their vision becomes stretched. I did not want to dilute the vision of VOICE so instead, I started another initiative with a completely different focus," says Anusha. So from the very start, SoCh was clearly about young women who want to understand their role in the social sector and help others as well. "We want to help unlock the passion of women for the social sector, see the value in themselves and eventually, become change agents of the society," she says.

Anusha used to work with Dr Reddy's Foundation, Hyderabad and Gram Vikas in Odisha among other foundations

In the same light, SoCh recently concluded their first SILT Bootcamp, in which, young women in their 20s are taken through this intense six-month programme where they understand the social sector and how they can contribute to it. There are classroom, on-field and reflective sessions spread out over every Sunday where girls understand their place in the world. Filling us in on the details, Satvika Jandhyala, Programme Manager, informs that for the founding cohort included students from Tata Institute of Social Sciences, Hyderabad Central University, those who have pursued Master's in Social Work and others. "14 committed individuals graduated from the course recently," she says. And these women now have a complete picture of their place in the development sector and how to make a career out of it. "The participants usually are aware of their privilege and are taught how to make the best of it to benefit others," adds Anusha who holds an MBA in Rural Management from the Institute of Rural Management, Anand (IRMA). 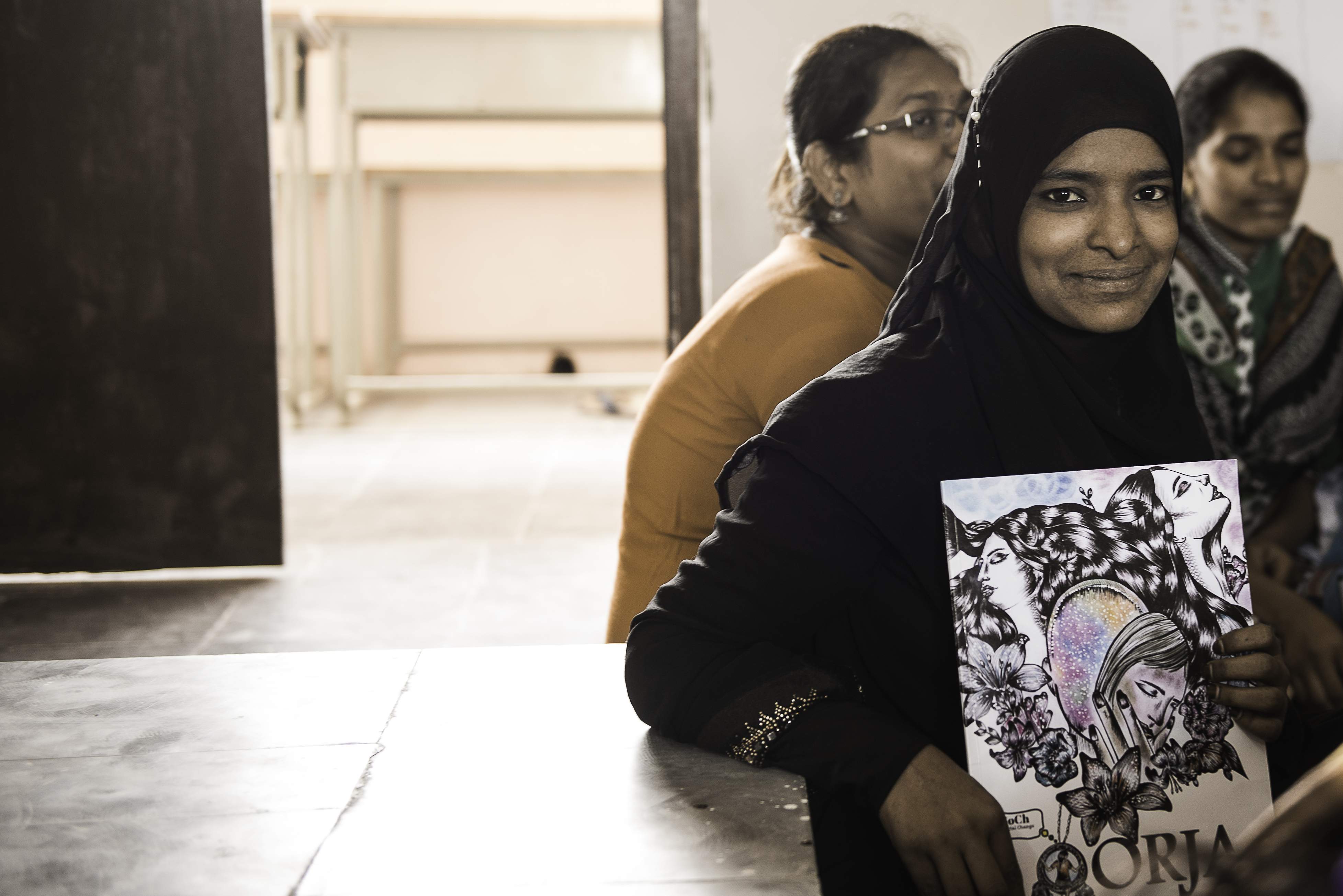 A woman during the Oorja cover designing programme | (Pic: SoCh)

On to the next
When it comes to Oorja, their second flagship programme which has already been conducted in Tier II towns of districts like Khammam and Mahabubnagar, it is all about selecting adolescent girls and training them, who, in turn, will train other girls. Through eight days, they are taught to be future-ready, about relationships and when and how to take action if things go astray. "Our aim is to expand their idea of a future and make them understand that their role is much bigger than just dedicating themselves to their families," says Anusha, who was born in Chennai and brought up in Hyderabad. While more than 500 participants have attended their sessions, the participants, in turn, have reached out to 4,000 students. And that's called a chain reaction of change.

They conduct workshops in schools depending on the requests they get. They generally deal with topics like reproductive health, menstrual hygiene and so on

Anusha is an Asia Pacific Leadership Fellow and has been a part of Harvard-Dasra Social Impact Leadership Program and among many other such prestigious honours, she has been working in the social sector since the year 2002. So, she may have designed the curriculum for both SILT and Oorja, she knows she has a great team executing it on ground. "I believe the key to delivering content that matters is by making it applicable so we bring on experts on board who talk to these girls about grassroots-level issues," says Anusha. Going forward, they want to make SILT a residential programme, "just so that we can sustain the energy and nothing breaks the momentum," she explains.

All this to ensure that women and girls know what they are up against when they start solving issues cropping up in their own community and in their own homes. Towards the end of our conversation, I ideally wonder about the tribal girl in Andhra Pradesh and whether her negotiation skills will hold her in good stead for the rest of her life. "We will never know. Maybe she will be forced to marry and then maybe, her husband will ask her to quit studying. But what is certain is that she will resist and that's where all the change begins," she concludes. 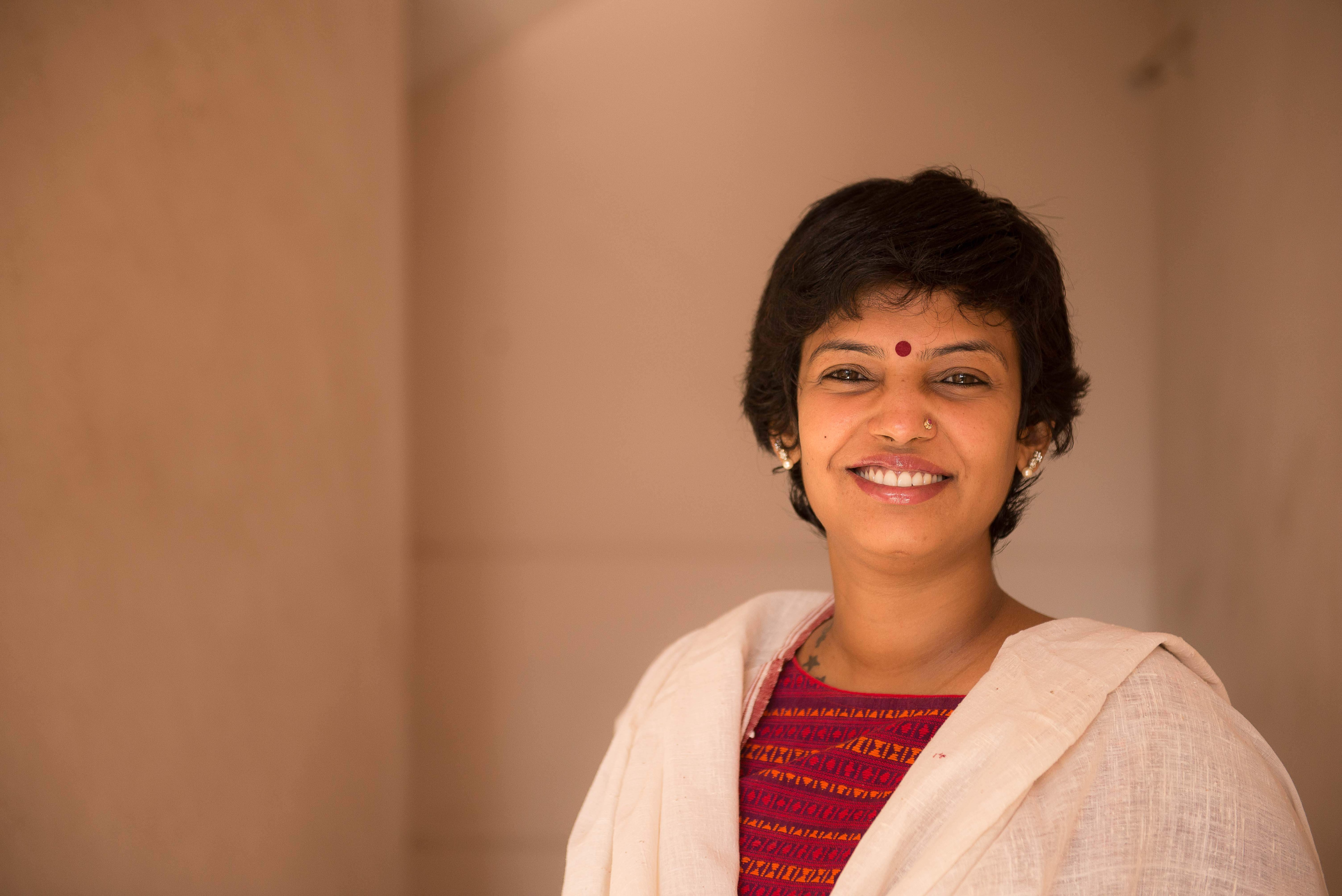 There is just something about working with women, they are so full of energy and I love that about them
Anusha Bharadwaj, Founder, SoCh | (Pic: SoCh)

Crash course
So what exactly is so intense about SILT Bootcamp? Well, for starters, it is divided into three segments:

- Understanding social change: Understanding social change
For the first two months, concepts like feminism, gender equality, equity, equal opportunity and so on will be made clear to them through classroom interactions with mentors and experts in the respective fields
- Field immersion: The next two months will involve them in on-field activities to really understand what is going on in the grassroots. SoCh has partnered with other organisations to facilitate this
- Personalised action plan: Not only are the last two months for reflection and introspection, but participants will also be required to come up with plans that can solve an issue

Time for tech
Regarding technology and how it can help the social sector, Anusha says that technology can accelerate work, but you are still going to need the human touch. "For example, you can have several helplines and customised automated responses to queries, but at the end of the day, what a helpless person needs is a human voice that says it is not their fault," she explains

Plan Oorja
With Oorja, their plan is:
- They approach government colleges and conduct an eight-day session there with girls about critical knowledge and social sector
- Selected girls are put through a refresher course
- These girls then reach out to government schools and zilla parishads in their mandal and spread the word further

We should all be feminists
Ask Anusha, who has dedicated her life to working for girls and women, about the importance of feminism and she says, "We as females are so far behind in the gender paradigm that we must not be afraid to call ourselves feminists. We must say it no matter who is labeling us." 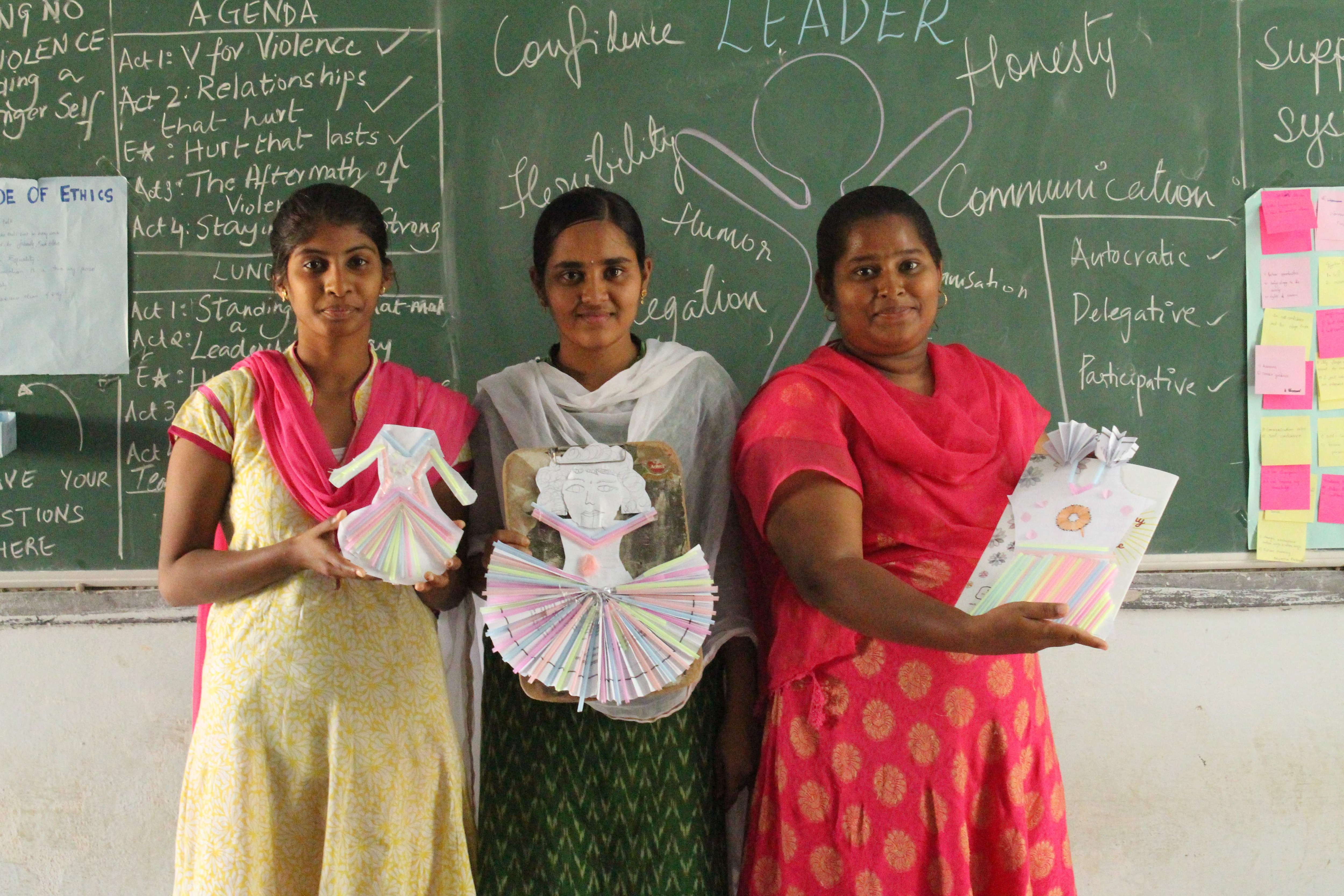 Young blood
Though Anusha is very happy with the contribution of youngsters to the sector, she thinks this is what they need to really make it:
- Sustaining the passion
- Find a cause and commit yourself to it
- Having the patience to see your plans through 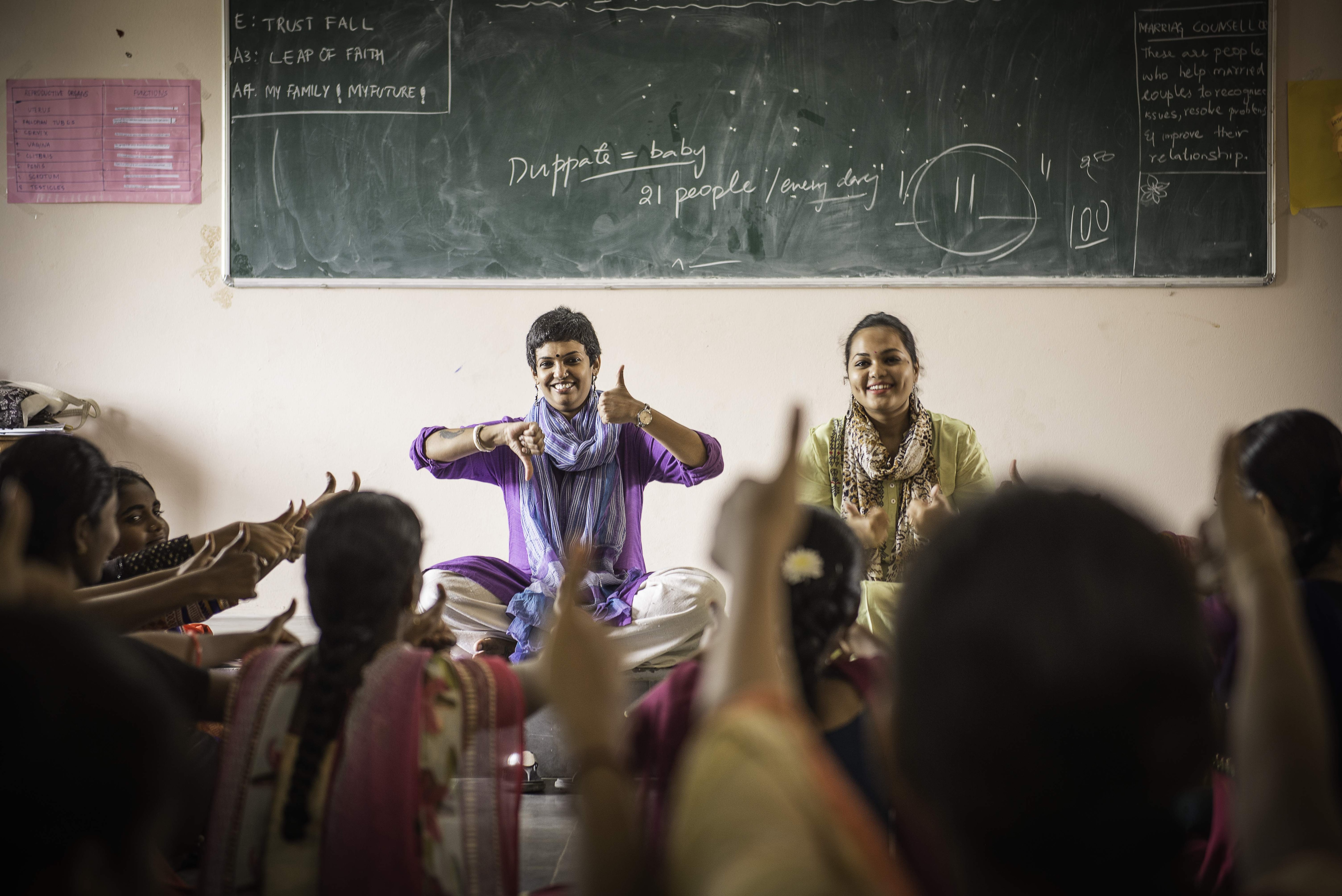 Read more about them here sochforchange.org