Despite the visa cuts and hard talk, the core base of Indian voters would not have been as affected by Trump's brand of politics because they're in a 'settled strata' in US society

Tightening H1B visas, immigration policies and a "laboured" response to the COVID pandemic will not have dented Donald Trump's re-election prospects as far as the Indian-American community is concerned, opined Professor Sreeram Sundar Chaulia, Dean, Jindal School of International Affairs.

Chaulia said during TNIE's E-Expressions, which featured former Indian Ambassador to the USA, Meera Shankar and Senior Journalist Kaveree Bamzai, "I think Indian-Americans are sitting pretty and they did not bear the brunt of Trump's harsh policies like other communities. Trump going after H1B visas did not affect naturalised Americans, and some of them may vote for him because of the Modi-Trump bonhomie and because he is against radical Islam and is ready for a big dust-up against China — perceptions matter for lay voters — so a guy who is calling them (China) names and looks like he is going to punch them in the eye will appeal to them."

The Modi-Trump bonhomie, which has grown in proportions of magnitude from the packed stadium in Motera, Gujarat to the overflowing NRG Football Stadium in Houston, Texas, has accentuated a relationship that almost no Indian Prime Minister has shared with a US President, whether sitting or former. Expected to play a large part in the way Indian diaspora votes in the upcoming polls, Shankar explained that this relationship did not start off 'peachy'. "The first meeting Modi held in the USA at Madison Square Garden was during Obama's time and we must not forget that he had a good relationship and had built a good equation with Obama in the early period of his tenure. In fact, initially, he had to face some hostility from Trump and some getting around and getting over because he was seen as being too close to Obama. So the relationship has seen a fair bit and there is a certain steadying factor to it which is our strategic convergence and a comfort level because there is no fundamental conflict."

Meera Shankar, who was the ambassador from 2009-2011, also pointed out that though Democratic Presidential candidate Joe Biden's numbers were ahead of Trump's, the margins were very slim, "Biden is ahead in some of the swing states but the margin is very slim. Which way they will go is undecided. Trump's own approval rating has remained steady and he has neither been able to increase it nor has it decreased very significantly. Which means his constituencies are rock solid," she explained. 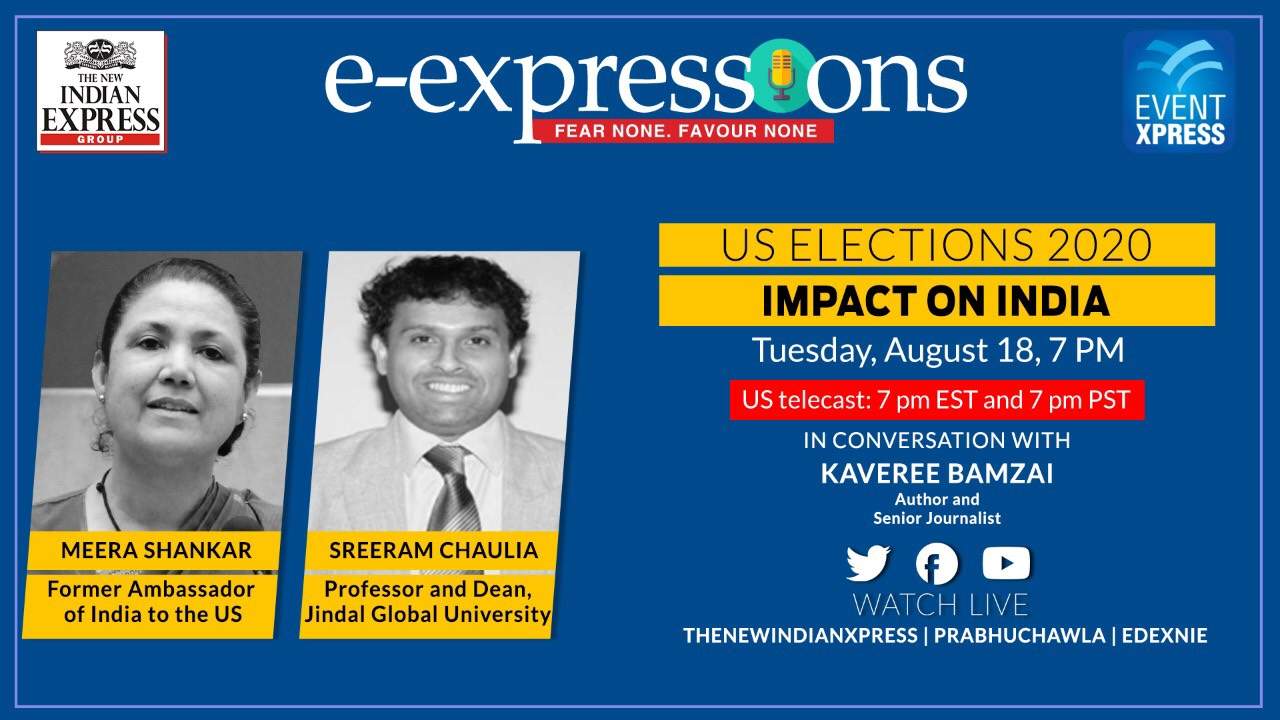 While it is established that Indian-Americans have always voted Democratic, and both speakers acceded that the Democrats were likely to "poll higher than the Republicans among the Indian diaspora," they believed that the addition of Kamala Harris to the Biden ticket is being keenly watched. Shankar called the move 'historic', "Kamala Harris being on the Biden ticket is historic because she is a woman and she is a woman of colour and this has energised the campaign from an 'anything but Trump' state. Polls suggest that between 52-54% of the American people feel that she is ready to be the President."

"Traditionally, Indian-Americans have heavily leant Democratic," explained Chaulia, adding, "One hears that Trump's campaign is targetting Hindus and 1.3 million voters is no small number. Both parties are going to vie for them especially in places like Ohia where it will be touch-and-go. Indians will be very valorised. I don't expect many of them to vote Democratic, though Kamala Harris may be an added attraction."

Having dealt with Joe Biden when he served as Barack Obama's Vice-President, Shankar pointed out that one thing that worked in his favour was his positive attitude towards India, "He was extremely congenial. He is known to be very honest. He is blue-collar and appeals to the working-class American. He is extremely cordial and when I met him for the second time at a somewhat large conference, he said, 'Madam Ambassador you are the most important person in the room' and I said 'Thank you Mr Vice-President, it's very gracious of you to say it because it's not true' and he laughed. He's had long experience in foreign policy and a positive attitude towards India. You'll never get the unfiltered responses of President Trump. There will be more predictability and a more cautious and mainstream (approach)," she recalled.

But both of them agreed that you simply cannot rule President Trump out. Chaulia summarised it thus, "Trump is like a street brawler and Biden doesn't have that capacity. He will use race, immigration, lots of China-bashing and the kid gloves are off. He will play on emotions more viscerally. He will use the majoritarian sentiment against Harris and this will repel White, right of centre voters. If you are a rational voter, obviously you will go for Biden. If there was an election today, the Democrats will win. But three months is a lifetime in politics. America is in a great depression today and there could be more racial violence. Somehow, the decency and sophistication and the elite approach of the Biden-Harris ticket may not work."