With a heart-warming letter, this 11-year-old from Hyderabad raised funds for a Care-ona kit for the needy

Ridhi Nemala is in the third phase of the distribution and aims to distribute over 1,000 kits this time under her campaign, Care-ona. All this with the help of her parents and TEA Cares Foundation

It was natural that when the lockdown was announced Ridhi Nemala's thoughts went straight to chocolates and ice cream. Would she have enough of them and would she be allowed to get more if she runs out, she wondered. But upon catching up with the news with her parents, she realised that there are people who have much bigger things to worry about like what to eat and feed their children. 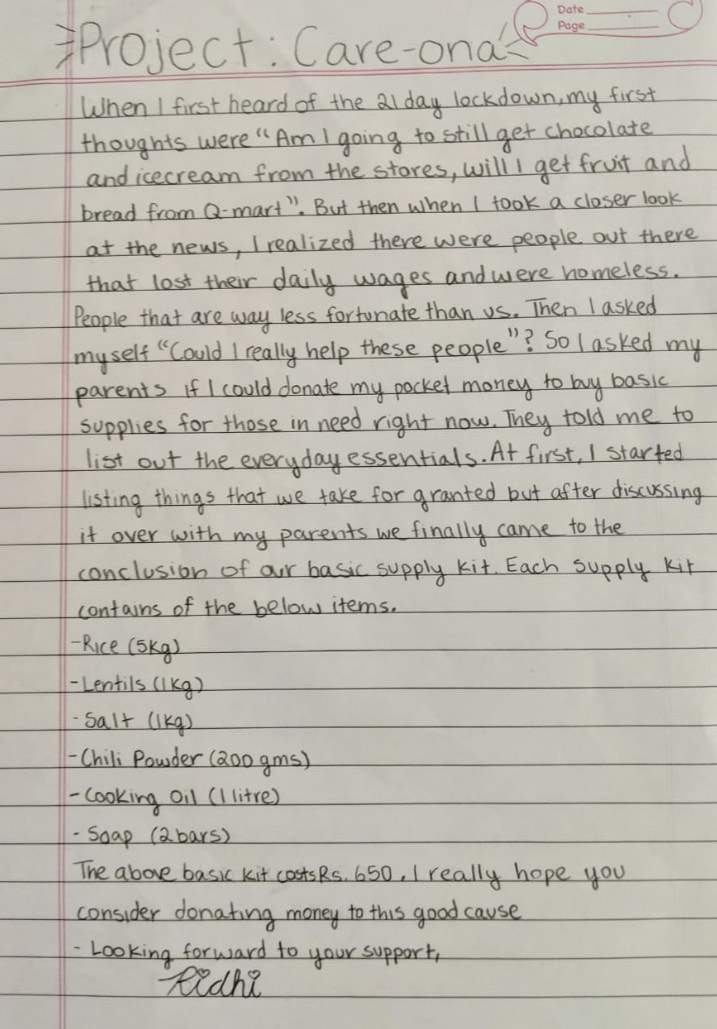 Determined to help out, Hyderabad-based Ridhi took stock of her pocket money with the intention of purchasing basic commodities and donating it to the needy. While coming up with the list of products, she included products like toothpaste, toothbrush and toilet paper too. "That's when my mother explained to me that there are people who can do without it," says the 11-year-old. With the help of her parents, she narrowed down the list to rice (5 kg), lentils (1 kg), salt (1 kg), chili powder (200 gram), cooking oil (one litre) and soap (two bars). She also considered the cost factor, how long will these supplies last and other points before zeroing in on this list. The cost of the kit came up to Rs 650 and that's how her initiative Care-ona was launched.

Ridhi's mother Shilpa Rao says that Ridhi is outspoken, social and shows a sense of responsibility

A touching letter
Ridhi, born in Virginia, USA, knew that her pocket money probably wouldn't suffice. So she took help from her grandparents, cousins and immediate family to raise Rs 1.3 lakh through which she was able to purchase 200 supply kits and all this happened over just two days. What really clicked was a sweet, heartfelt letter that she wrote expressing her concerns and her intention, which was then circulated on social media through her parent's handles (she doesn't have an account of her own yet) and touched many people's hearts. One of the lines from her letter stated: 'I realised there were people out there that lost their daily wages and were homeless. People that are way less fortunate than us. Then I asked myself "Could I really help these people?"' Again, with the help of her mother, she started a campaign on Milaap, where more and more people read the letter and this helped her gather more funds. "We have a big farm, so we use it to stock supplies there. My mother (Shilpa Rao) is the board member of TEA Cares Foundation, who also helped us procure the rest of the materials," says the class VI student of the International School of Hyderabad. Cyberabad Metropolitan Police helped Ridhi identify the most vulnerable people, who don't even have ration cards, in specific areas. While she couldn't step out herself and distribute the kits, since she is just 11, her parents and volunteers from TEA Cares Foundation did the job. For the first phase on April 2, 200 kits were distributed with the help of Rs 1.3 lakh they received in donations, including their own contribution as well.

Coming up in the next phase
Soon, the team identified 500 more people and Ridhi got down to gathering funds, ensuring there were enough kits and helping procure them. Thus, on April 12, 526 kits were distributed at Chanda Naik Nagar in Madhapur. Now, for the third phase, they aim to gather enough donations to supply 1,000 kits. "My school also helped put out the word and my friends have joined the cause as well," says Ridhi. So after e-classes conducted by her school between 8.30 am to 2.30 pm, Ridhi finds time to coordinate supplies and gather more funds. They have crossed the Rs 6 lakh mark and she is trying her very best to spread the awareness among more and more people. "We, as kids, can start our own campaign or blog about it. In one way or the other, we can do our bit too," she concludes.

For more on the campaign, check out milaap.org/fundraisers/support-ridhi-2?community=10177