Today, hospitals are battlegrounds where doctors are waging a war against the COVID-19 threat. A month ago, things weren't so dire. As we were entering the second floor of the Paediatrics ward at the Government Coimbatore Medical College Hospital (CMCH), we were alarmed by the cry of a little boy who seemed to be about a year old. His father took the child from his mother's arms and showed him something on the wall. We couldn't see what it was, as we were facing the other way. To our surprise, this little boy started smiling. Curious, we moved towards them to see the wall painted with colourful characters and cute animals.

After spending about an hour strolling through the ward, we finally understood that these were pictures based on nature-friendly concepts such as afforestation, negative impacts of plastic, the importance of parks and so on. The characters on the walls had animal heads but with human body shapes. When we were done with the observation, we approached Chandrans Yuva Foundation, a city-based NGO, the hands behind these artworks. "As part of our Vannam initiative, we are painting the walls of Coimbatore. Then we figured, why not GH? Because hospitals usually paint a gloomy image even for elders. And children would love pictures. Hence, we decided to start with the Paediatrics ward itself and approached the Dean who directed us to Dr V Booma, who is the HOD of Paediatrics department," shares Shasikala Sathiyamurthy, Chairperson and CEO, Chandrans Yuva Foundation. 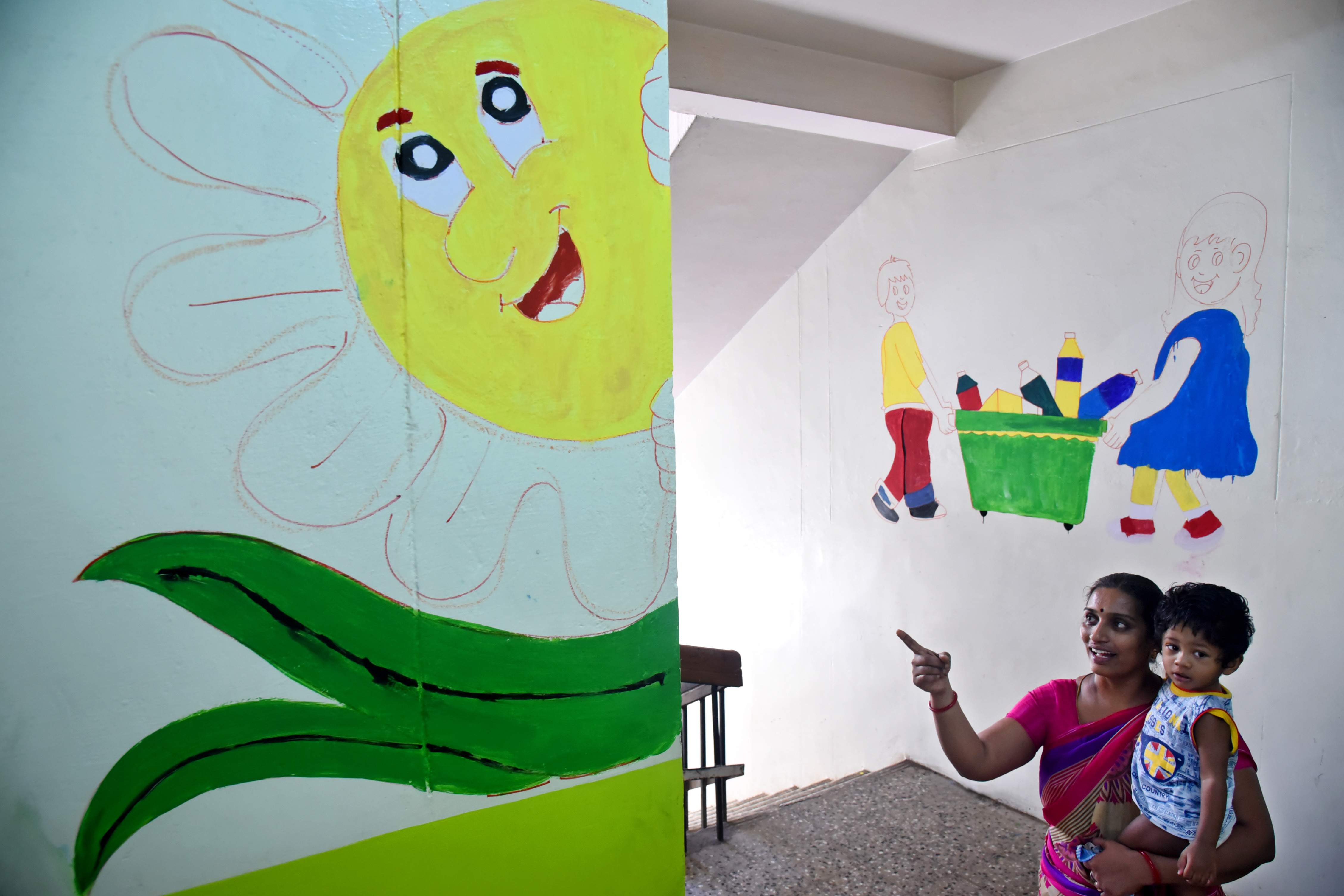 The paintings were done by Chandrans Yuva Foundation and their volunteers (Pic: A Raja Chidambaram)

Dr V Booma talks to us about the ideation process. "We were happy when the Foundation approached us with this cause. We came to a mutual understanding that we would not use cartoons because it is an addiction for kids today. The volunteers drew characters which encouraged disposal of plastics, growing trees, etc. This, in a way, would encourage kids to practise the same in their daily life," she said. "The members of the foundation also chose non-toxic paints such that it wouldn't affect the kids," confirms the doctor.

The artworks were done by about 300 volunteers from the foundation and Yuva club members of Sri Krishna Adithya College of Arts and Science. "We have been working on this idea for almost a month now. We are planning to do the same in other wards too so that the hospital does not have a sense of fear any more and instead will have a feel-good view," informs Shasikala, as we spoke to her a little before the COVID-19 crisis hit. "We already know that this initiative had fulfilled its purpose because we happened to witness a few parents showing these paintings to kids while feeding them," she smiles. 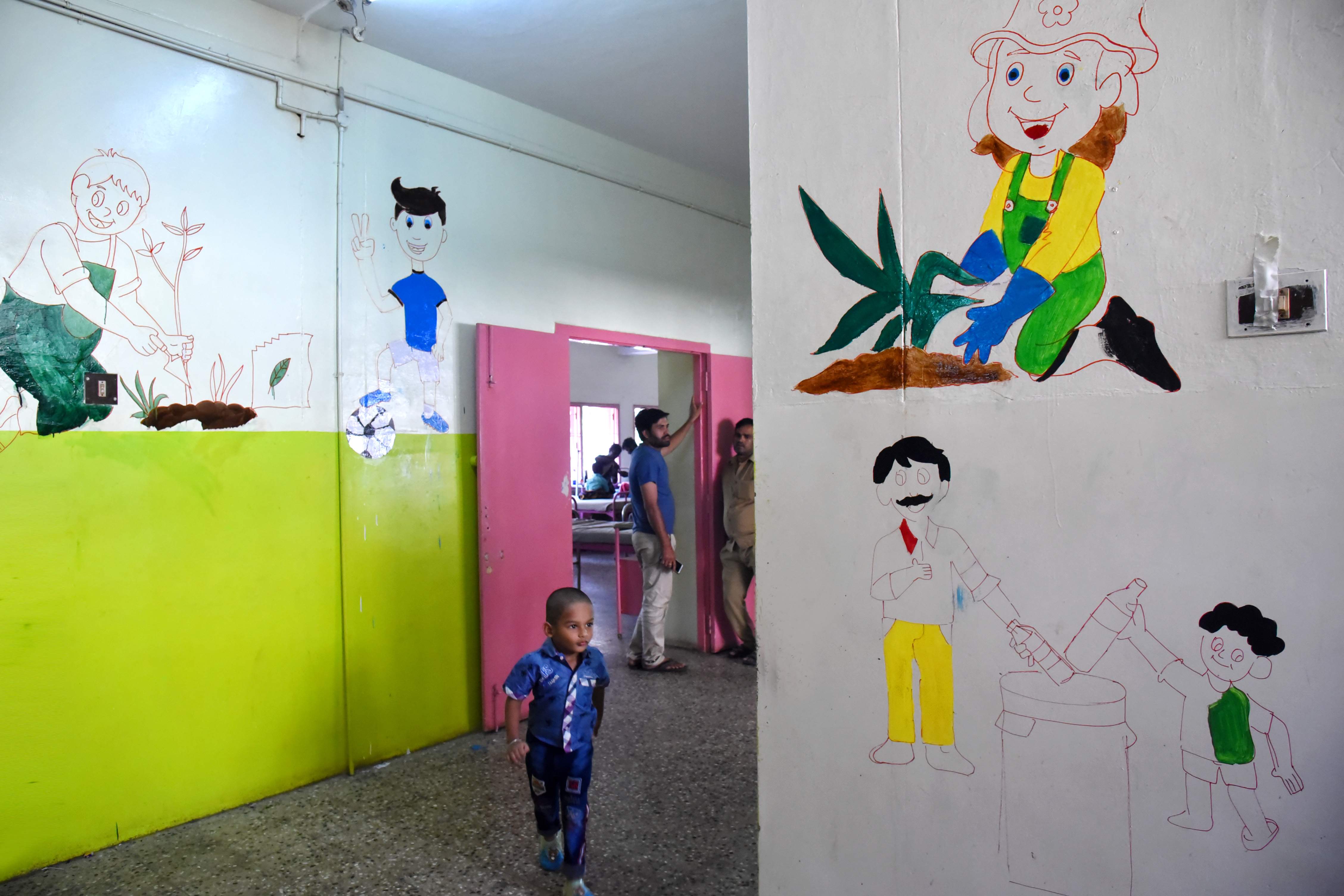 The volunteers have tried to convey social messages through their paintings (Pic: A Raja Chidambaram)

Shasikala was definitely right because the parents had plenty of positive things to say about the paintings. "I have been to GH before, and the paintings here seem to be interesting because of these unconventional cartoons. There are social messages too that are conveyed through the paintings which would definitely have a good impact on these kids," says Muhsina, a parent of a three-year-old.