One gold, one silver, two bronze and 15 Medallions of Excellence were won by Indians this year at WorldSkills Kazan 2019. Golipally Koteshwar Reddy was one of them

Bad stomach, fever, extremely cold weather — seems like a lot was conspiring to keep Golipally Koteshwar Reddy from participating in WorldSkills Kazan 2019, the world championships of vocational skills. But despite it all, Koteshwar, who was already in Russia when these ailments hit him all at once, participated and came out with flying colours. He was one of the 15 people from India who was awarded a Medallion of Excellence. This honour was bestowed upon him for wielded his welding skills which he has been honing day in and day out for many years.

The scenario this year wasn't very different from last year when it comes to physical ailments bogging Koteshwar spirits down. Twenty days before WorldSkills 2018, while practising, spatters (droplets of molten material generated while welding) found their way into the youngster's eye and hurt his retina. "The doctor had to use a magnet to get them out and advised me to rest for a month," says the 21-year-old who was visiting Mumbai for practice sessions then. No prizes for guessing that he rested for two days and was on his feet again. He used eye drops and took a five-minute break for every one hour of work to see himself through. What's the secret behind his will power? Passion for welding of course, but also the fact that he believes in not worrying too much. "My father is a farmer and I have worked very hard to get here. So, I believe in working hard and not worrying too much about anything else," says the youngster who works as a Welding Instructor at Mahindra and Mahindra. 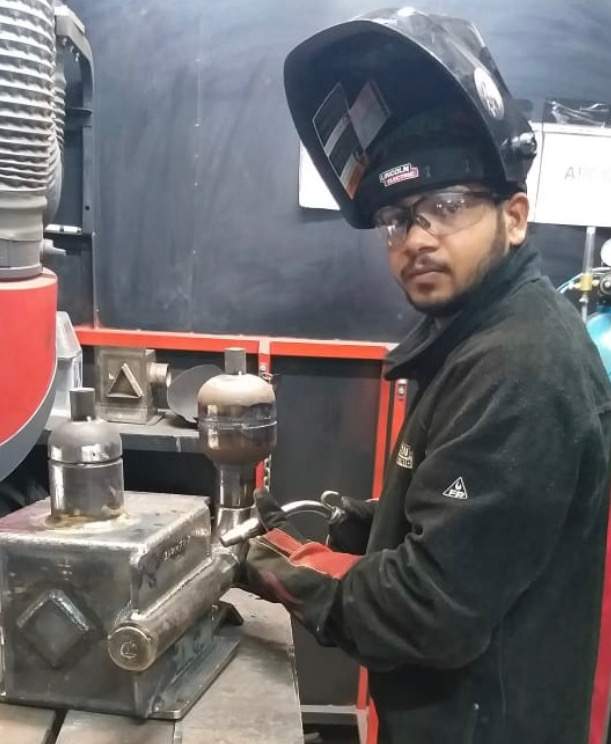 At work: Koteshwar doing what he does best | (Pic: Golipally Koteshwar Reddy)

"WorldSkills has helped me earn a lot of respect; it's a great platform for everyone to display their skills," says the Hyderabadi lad. But the most touching reaction has been that of his parents. "They weren't aware of what I was doing so I got them down to Chennai, where I was practising this year. Looking at me, they had tears in their eyes," he says rather emotionally. In the future, he wants to guide and motivate other aspirants to participate and excel in upcoming WorldSkills competitions. "I want us (India) to win more medals," he says enthusiastically.

Challenge accepted?
What was the task Koteshwar was presented with?