Here's why people are storming Twitter with the hashtag #millennialretirementplans

From living in their parents' basements to colonizing the Mars only to destroy it like Earth, millennials (those born between 1980 and 2000) wished for early death

Millennials across the world stormed Twitter with suggestions how they would like to retire, using the hashtag #millennialretirementplans, and most of them had pessimistic and gloomy views about their golden years.

From living in their parents' basements to colonizing the Mars only to destroy it like Earth, millennials (those born between 1980 and 2000) wished for early death via dark-themed jokes and memes about never been able to retire and putting the blame on Baby Boomers (those born worldwide between 1946 and 1964) and political upheavals.

"Hope we don't die in our chairs during a meeting that could have been an email," wrote one user.

"Watch as the environment disintegrates and move to Mars, where we will yet again, destroy another planet," posted another.

#millenialretirementplans
Living off the imaginary social security income, in my cardboard house

Most of the millennials painted a bleak picture of their retirement plans.

"Why is this even on trending? We all know we'll never be able to retire," said another Twitter user.

"Cultivate my kids so they can become successful millionaires and live off of them," wrote one.

Capitalize on the family business; sell mums horde in the garage, there’s got to be something in there. Anything.#MillenialRetirementPlans pic.twitter.com/06rXwZMZuA

There were several tweets about poor healthcare as a barrier to a good retirement. 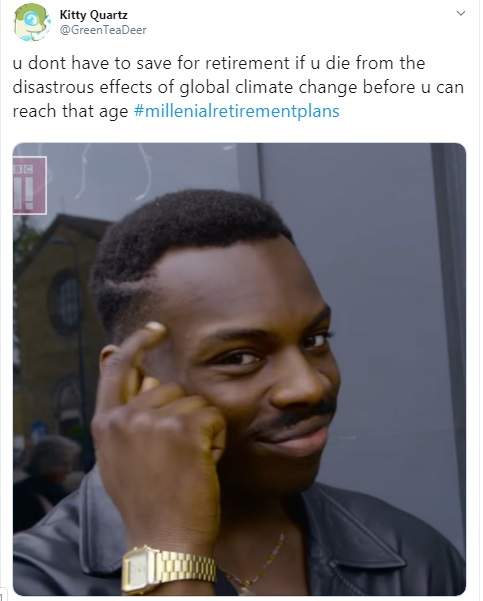 "Work myself to death since healthcare is a debt sentence & social security won't exist by the time I'm of 'retiring age'. Or just wait for the nuclear apocalypse," said one millennial user.

"Dumpsters are the new tiny houses," posted another. 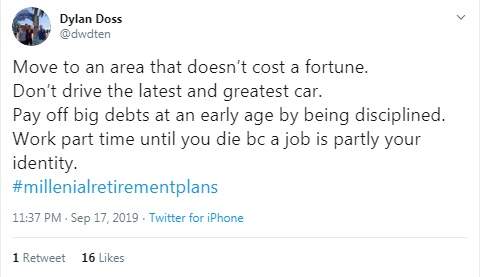 A few millennial users, however, made light of the situation.

"Travelling around the world collecting Pokemon Go," said a user.

A recent report by the Organisation for Economic Cooperation and Development (OECD) found that today, just 60 per cent of millennials are considered middle-class, compared to 70 per cent of baby boomers when they were in their twenties.