Why Azhar Maqsusi has been feeding the poor for 2,707 days non-stop

Azhar Maqsusi is not a new phenomenon. Not in Hyderabad and certainly not outside the city either. If you are from the City of Nizams and aren't acquainted with his work yet, we suggest you drop by the Dabeerpura flyover in Old City at 12.30 pm or the Gandhi Hospital in Secunderabad at 2.20 pm on any day. For those who aren't from the city, just go back to that episode of Amitabh Bachchan's Aaj Ki Raat Hai Zindagi where Maqsusi was invited as a guest. Or check out that campaign video for Being Human which also featured Salman Khan. The man in question has been feeding the underprivileged for eight years, well, 2,712 days to be exact. Not just this, his actions have inspired youngsters from Gadwal to Guwahati to replicate the same model he follows.

And what inspired the 38-year-old man were his own famished younger days. And his mother. The power of going to bed with a growling stomach
Maqsusi has slept hungry for enough nights to know what it feels like when your stomach painfully contracts because of hunger. His father passed away when he was four and his mother had five malnourished mouths to feed, including Maqsusi’s. "We used to wait for a dawat to eat a fully satisfying meal. In fact, we used to set aside our clothes and shoes, though we hardly had any options, ten days in advance to look our best," recalls Maqsusi. To help the family get through these difficult times, his mother would always say, "Believe in God." And with this belief in his heart, Maqsusi, who studied till class V, took up tailoring, shifted to glass fitting work and then settled into working with Plaster of Paris.

Maqsusi has two sons, aged 7 and 11, and a daughter who is pursuing her second year of undergraduate studies

In 2001, after he got married, he rented a shop for which he paid Rs 1,200 per month and that's when he saw Lakshmi, a hopeless and hapless woman, trembling in pain. Maqsusi could relate to her anguish — after all,  only a few years had passed since the time hunger had made him restless. After asking around about her, he packed some food from the hotel for her and handed it over. "It is probably her blessings that today, we are able to feed so many mouths," says Maqsusi who was born and brought up in Old City, Hyderabad. Thus, Hunger Has No Religion began in 2012, under which Maqsusi serves a hot meal of dal chawal every day to the needy and underprivileged in Dabeerpura and near Gandhi Hospital. But what he did not anticipate was the kind of love and support he would receive for his initiative. "My mother always says, 'If you help one person, then God will send ten people to help you'," shares the social worker. Today, his model of feeding the poor has been replicated in several parts of the country after it first spread to Bengaluru. "A youngster named Gulab approached me with a request to start something like this in Bengaluru, hence, the Roti Charity Trust was started. We send rice to them every month," he explains.

He also recently started the Do Roti campaign wherein, everyone is encouraged to carry some food while leaving home, biscuits, roti or anything else, and give it away to beggars instead of giving them money

In Raichur, the IFA Foundation took it forward and in Tandur, it was the body All India Human Rights that took the baton. In Assam, near Guwahati, they conduct this programme once a week and in Jharkhand's Gumla district, every Sunday this distribution is carried out and is dedicated to Santoshi Kumari, the 11-year-old who passed away because of starvation as her ration card wasn't linked to her Aadhaar card and hence, she was denied food. 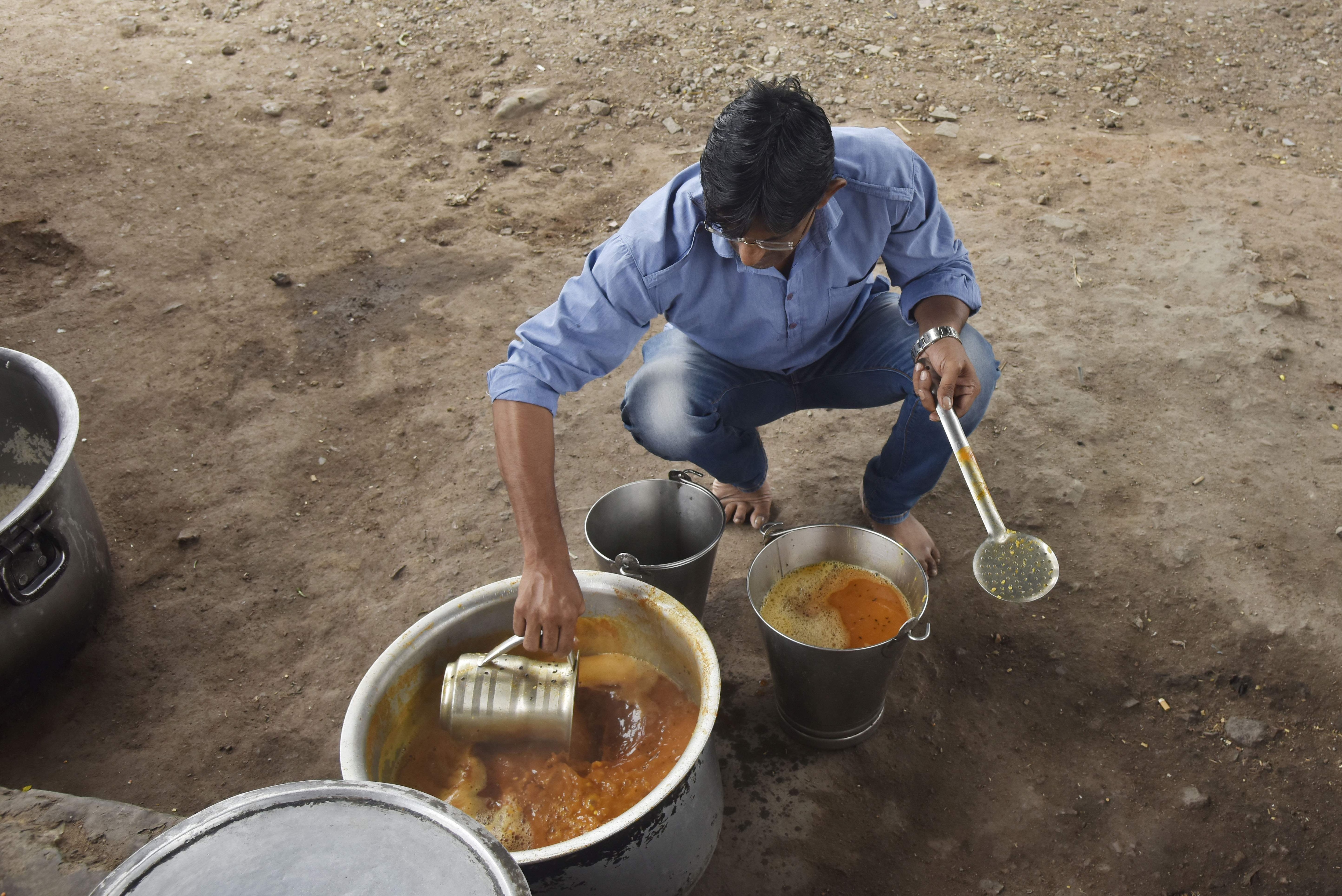 Mixing the dal: The dal is almost ready to be served | (Pic: Vinay Madapu)

Getting the young to feed the masses
Maqsusi is often besieged by youngsters, requesting his assistance to take his initiative forward in their area. The first and foremost point he makes is, "I feel like, individually, one can accomplish a lot more than being in a group, unless you have like-minded people with you, which again is a task. What I am trying to say is just start and don't wait for anything or anyone." Also, more than donations, they encourage people to physically involve themselves in volunteering, which is personally more important to Maqsusi.

"It is because of the blessings of my mother and people on social media that we have come this far," says Azhar Maqsusi

Borrowing from his own experiences, he narrates how if the cook did not turn up, his wife used to cook the meals. When transportation became tough, they started cooking under the bridge, but never did the one-man army let anything stop him. "Even if you get a degree from Oxford, if you have forgotten the degree of humanity given to you by your parents, it's of no use. We must progress towards a brighter tomorrow with both degrees in hand," he implores.

And it is mother's talim, the degree that his mother bestowed on him, that continues to drive all his decisions. And with this by his side, he intends to mitigate hunger by expanding his campaign to all districts of Telangana. 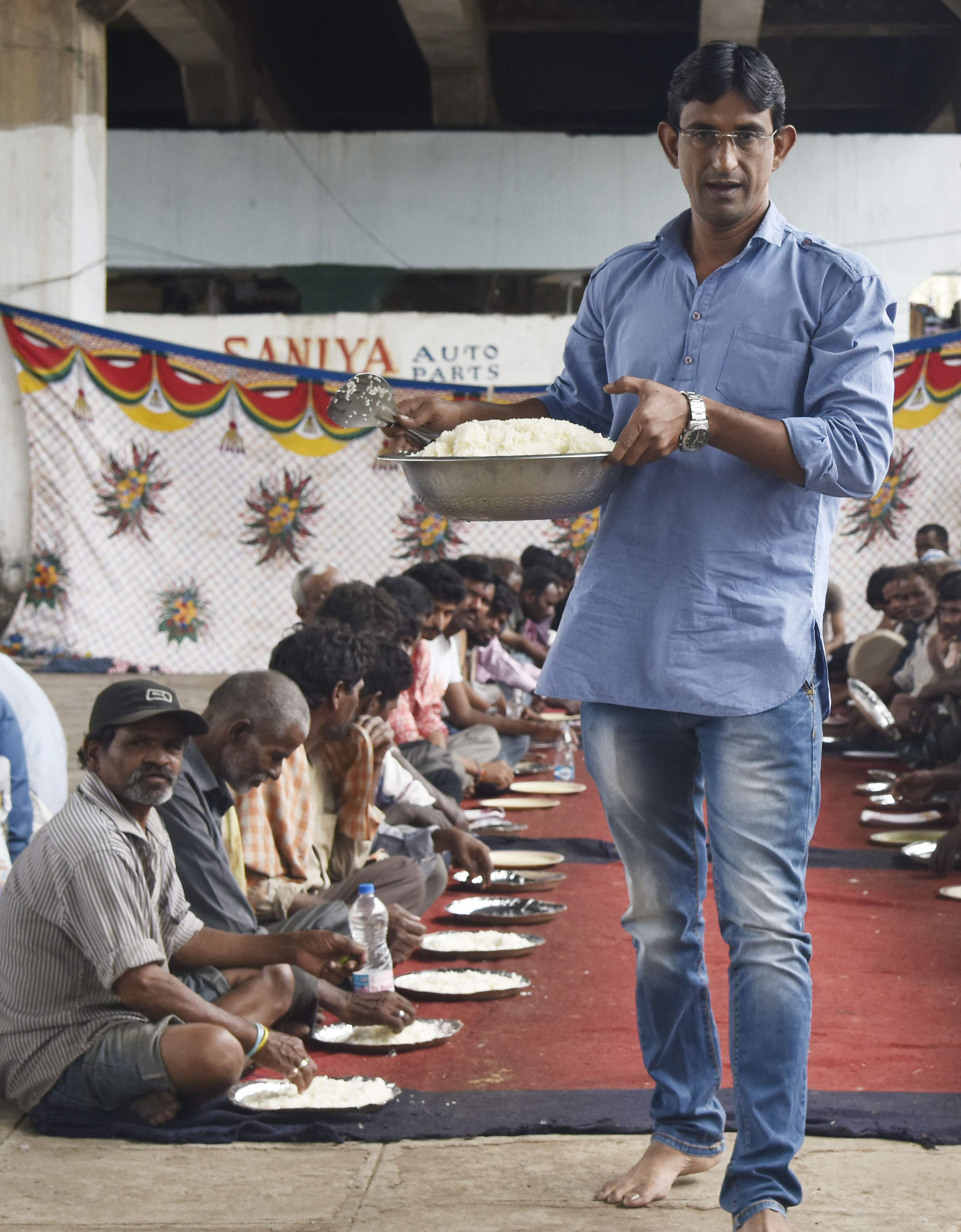 More than a square meal

Though vanquishing hunger remains his main mission, Maqsusi has branched out to other causes as well:
- Free health clinic in Malakpet, Hyderabad: To curb off the counter sale of medicines for minor ailments, Maqsusi initiated this clinic which receives 90 people per day and is open from 7.30 pm to 10 pm
- Tailoring centre in Assam: About 1,300 women have been trained to stitch clothes in the span of three years, enabling them to earn their own livelihood or at least save money by stitching the clothes of their family
- Mobile repair: This is to train students who can sustain themselves by working in shops which offer to repair cell phones
- Coaching classes: Six months in a year, they offer free coaching to students of class X, both in Telugu and English medium near Dabeerpura

For more on him, check out azharmaqsusi.in
Reach Out: facebook.com/Azharmaqsusi1