No more Netflix and chill? Here's why people are tweeting #BanNetflixInIndia

Netflix is Anti-Hindu as well Anti-India, showing Hindufobic series. If Terror has no Religion, then why Netflix links terror to Hinduism! Censor Board & Govt must take action, a Twitter user wrote

#BanNetflixInIndia has been trending on Twitter with over 32 thousand tweets on the hashtag since Friday morning. The OTT giant Netflix is being accused of defaming India on a global level and promoting anti-Hindu content on its platform.

Ramesh Solanki, a member of the Shiv Sena's IT Cell, has filed a police complaint against the US-based digital media platform alleging that the online streaming service is "defaming Hindus and India" through several shows hosted on its platform.

Surprisingly, support has been pouring in on Twitter after Solanki pointed these out. The people supporting this viral trend suggest that Netflix, through its content, has been trying to paint an incorrect picture of Hindus and India globally and so it should either be banned or censored.

In his complaint given at Mumbai's LT Marg Police Station, Solanki cited examples of series like Sacred Games, Laila and Ghoul, along with shows of standup comedian Hasan Minhaj called Patriot Act to accuse Netflix of trying to "paint an incorrect picture of Hindus and India globally."

"It is with deep-rooted Hinduphobia that the platform is portraying the nation in a bad light," Solanki wrote in his complaint letter. A copy of the complaint has also been sent to the Maharashtra Chief Minister Devendra Fadnavis and Mumbai Commissioner of Police. Solanki apparently said that people were sending him complaints regarding the content on the online streaming service "which is against India, Hindus and the Indian Army." 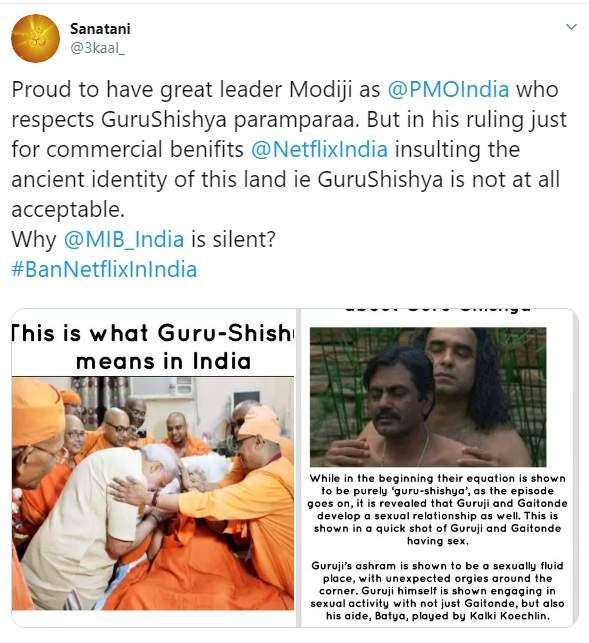 "Then I checked it myself and seriously it was the same. They have made a strategy to defame India and Hindus - first, you pay money to subscribe and then see all this. Mostly, the users of Netflix are youngsters. So, this goes to their mind that the Hindu community is wrong," Solanki said. "Secondly, people also see these shows in foreign countries and form a perception about us. We are being defamed through these shows", he added.

Solanki is now "hopeful that the police will file an FIR." He added, "I will see to it that there is some action taken."