We talk to Sabari Kumar, the brain behind the YouTube channel Saapattu Raman, whose ‘food challenge’ videos have become popular — particularly because his father, an AYUSH doctor, features in them

Impressed by international competitive eaters like Matt Stonie and Randy Santel, who have a decent fan following on YouTube thanks to their various ‘eating challenges’, Chinnasalem paiyyan Sabari Kumar decided to do something similar. “Last year, I had just come back from Ukraine after completing my Bachelor’s in Medicine when I decided to take a break from studies. As I was good with the camera and all the technical aspects of video making, I decided to create content that people can relate to and therefore zeroed in on food challenges as many Tamil YouTubers were not really pursuing this,” says the 25-year-old who launched Saapattu Raman, a YouTube channel on May 22, 2018, to bank on his family’s, especially his 56-year-old father Porchezhiyan’s, large appetite.

The videos would follow the same format as its foreign counterparts – with gigantic portions of food and the all-important timer – but with a twist: the videos would be a family affair and the food served would be strictly homemade. Their first-ever video featured Porchezhiyan and Sabari in a jackfruit eating challenge. This reporter gaped in part-awe, part-horror as the dad and son gobbled up the 4 kg fruit, which has a reputation of causing stomach pain if eaten in excess, in 7 minutes 39 seconds. 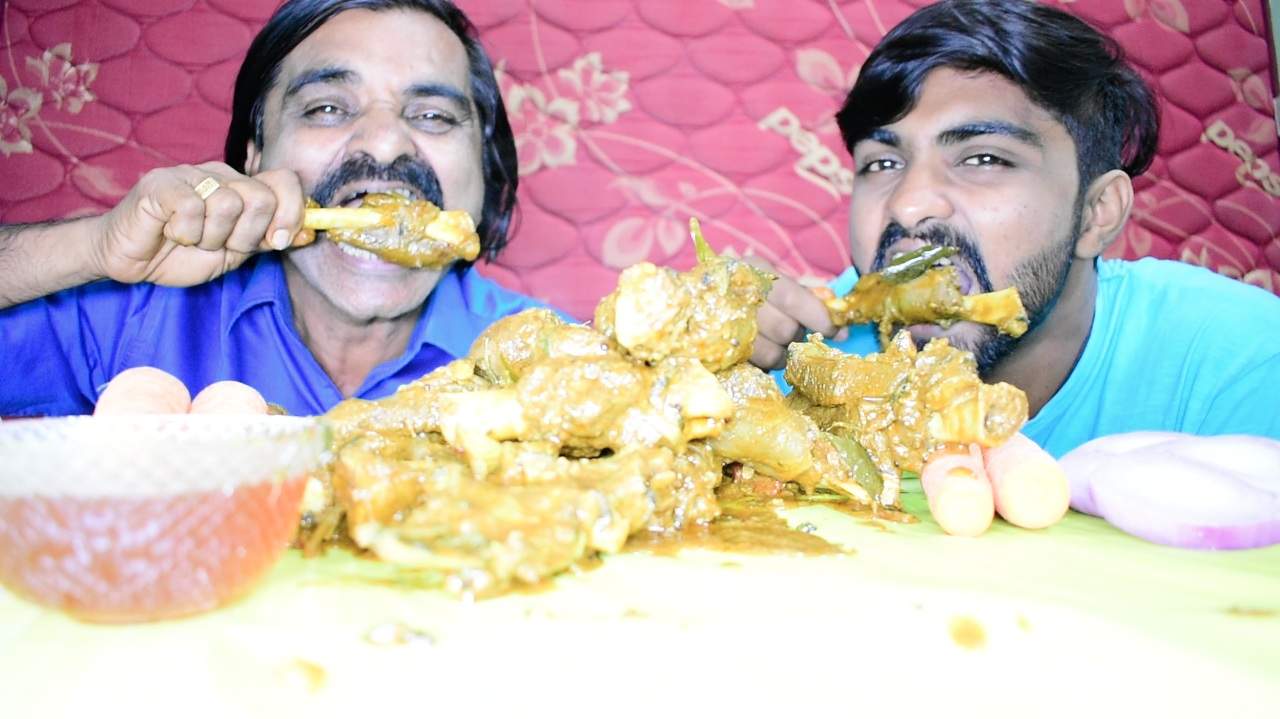 “We got more than 3 lakh views for that video. People were amused by watching our eating skills, and we got overnight followers also. But many people kept asking about our health and how we manage to down so much food within minutes,” recalls Sabari, adding that when this happens, they would calmly tell their naysayers the secret behind their gargantuan ‘eating capacity’ – genetics and having an organic diet. “Not many people know that my father is an AYUSH doctor who specialises in electro homoeopathy and even runs a clinic in our hometown. He has always been an ‘overeater’, like his father and his grandfather before him. So I think this is normal and runs in the family. None of us has diabetes or high pressure or any lifestyle-related ailments despite eating so much. I think this is due to the fact that we eat food made from raw materials procured from our own farms. My father simply refuses to eat from outside and has only dishes prepared by my mother,” explains Sabari who is involved in editing the videos and also manages the channel.

It has been more than a year since they started, and almost all their videos – right from the 14 minute-long ‘5 kg ottadaiyan samba nalli elumbu mutton biryani eating challenge’ to the 17 minute-long ‘2.5 kg nattu kozhi biryani eating challenge,’ their videos have garnered millions and millions of likes, and their fanbase only continues to grow. Recently, Shiva of Tamizh Padam fame contacted the father-son duo, asking if they would feature in a movie scene along with him. “We get more than 1 lakh views per day. I think people like our videos because of my father’s screen presence and charm. Also, now have also included a recipe segment where my mother’s preparation of the food is highlighted. She is the backbone of Saapattu Raman,” he smiles.

In case you’re wondering if they burn a hole in their pockets every month, given the amount of food that they need on days they shoot the food challenges, Sabari says that it’s all a game of balancing expenses. “We earn close to Rs 92,000 a month from YouTube and somehow we are able to manage everything. Even before we started posting videos on YouTube, our grocery bill was very high. So this is nothing,” he laughs.