Statue, statue? Why the demolishing of the Vidyasagar statue should worry India today

BJP supremo Amit Shah's road show turned into a chaotic rabble and people started hurling anything from water bottles to stones at protesting students of the University of Calcutta. Later, they, allegedly, broke into the nearby Vidyasagar College and broke Ishwarchandra Vidyasagar's statue. The intelligentsia is debating that the BJP might have taken it too far and dented the fabled Bengali pride — Ishwarchandra was not only a social reformer Bengalis are proud of, he also introduced the form of Bengali they speak and write at present. The debate is revolving around who did it — was it BJP, like people claim, or was it the ruling TMC because Amitji showed us that the gates were intact even after the roadshow and we know BJP mobs never climb walls or break in any other way — they always go for the main gate.

Read More: This is who Kolkata students think vandalised the Vidyasagar statue

What did the statue do to you?

But what we need to ask is why are these innocent statues being hurt? Is it just because they don't hit back? Is that making them an easy target? Assistant Professor of Sociology at the Centre of Studies in Social Sciences, Calcutta, Ch Satish Kumar says it is not that simple, "It is not just an act of impulse. When you demolish a statue you try to uproot the whole ideology. A systematic attack is in play to uproot and push aside particular ideologies and sections of people in this country — mostly marginalised sections of the society." The frenzy of demolishing, vandalising and defacing statues had gone viral early last year after a triumphant BJP mob uprooted Lenin's statue in Tripura quite the same way as US Marines uprooted Saddam Hussain's statue in Baghdad. Some explained it as mob fury against the left government.

Once Lenin's statue fell, the statue-vandalism virus spread like wildfire (tweets and WhatsApp messages travel faster now) across the country. Syama Prasad Mookerjee's statue was defaced with tar soon after, allegedly by ultra-left factions. Subsequently, Periyar and BR Ambedkar's busts were also defaced and vandalised in Vellore and Chennai. "There are different forms of iconoclasm. Sometimes there is a sociological purpose or a statement to make when statues or structures are demolished. If you look at the history of the protestant reformation, they talked about breaking down Catholic shrines and images. The Muslim army that conquered Mecca did the same thing. These obviously have a theological ring to it," says Rajarshi Ghose, Assistant Professor of History at CSSSCAL. 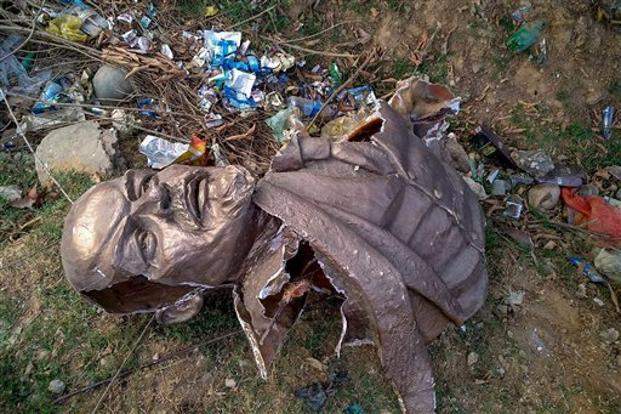 The Babri question — and the religious angle

"The demolition of Babri Masjid is also a sort of iconoclasm with both political and religious symbolism. The whole subcontinent is experiencing the same thing. It depends on the particular political climate as to which one gets the limelight and gets noticed and which does not. The aptest example would be the Taliban's demolition of the Bamyan Buddhas in 2001. They did it to make their statement clear in international politics that they did not accept the global community's discourse of heritage. The Taliban did not necessarily have anything against the Buddhists. On the other hand, Maulana Abul Kalam Azad's bust was destroyed in Kakinara but no one bothered to talk about it. No one knew who did it because it happened amidst the chaos on Ram Navami," he adds.

Razing statues to make a statement

The frenzy of demolishing has been reasoned for in many ways but it is very important to grasp the underlying reason, says Rajarshi, "Statues of Bangladesh's National Bird, Magpie Robin, and sculptures of Baul singers were demolished on the pretext that Islam does not believe in images or sculptures of living beings. But obviously, it's an act against the secular forces of the country. But iconoclasm is not just thriving here in the Indian sub-continent, there is an ongoing debate on whether the statues of Confederate heroes should be there on campuses across the USA. Queen Elizabeth's statue has been demolished in Australia time and again. It's happening across the world."

What is happening in India now obviously has a broader structure to it. But the immediate local context plays a major role in these incidents as well. Every time a statue is demolished or sculpture is defaced it has a deep but different impact on society. "Statues are very closely related to identity politics. Ambedkar's statue is identified with the Dalit political mobilisation, Lenin is associated with left ideologies," explains Rajarshi. "When Hindu deities are destroyed in Bangladesh it's a clear message to the Hindu society there that it's their time to leave." Some acts of vandalism might be executed just because the mob is too pumped up and needs to channel the energy somewhere. But more often than not it's a well thought out plan or at least stems from hatred. Why those who destroyed his statue hated Vidyasagar will never be known — he introduced widow marriages, isn't that against the Sanatan Dharma? 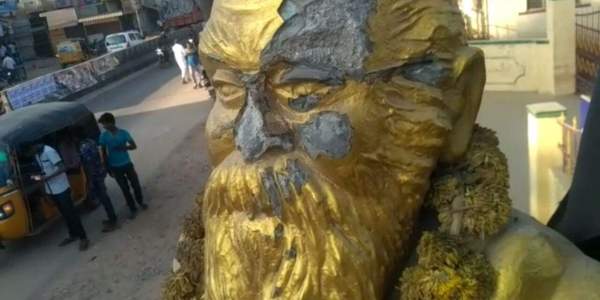 Vandalising statues often goes unpunished because it happens during a scuffle or a riot and no one really knows who did it. "We need to have a body that will protect the sculptures and statues and not just garland them once a year," says Satish. "People vandalise them because its easier than physical assault and also goes unpunished," he adds.