Running for a fresh breath of air. Why Sundeep Singh is running 100 half marathons in 100 days

It has been a tough road since March 5. With five more days to his goal, Sundeep has garnered a considerable amount of attention both offline and online

We have all spoken about air pollution at some point of time but not many have actually acted on it. Gurugram resident Sundeep Singh, the Principal Director of Accenture's Sustainability practice in India, also an avid runner, decided to run for it. His ongoing campaign  #100HMsForACause is all about spreading awareness about air pollution as he runs 100 half marathons in 100 days. For those of us who do not know much about running, Sundeep explains that half marathons cover a distance of 21.1 km — exactly half of a full marathon (42.2 km) to raise awareness about air pollution.

Air pollution is a serious concern around the world and especially in cities like Delhi where it's becoming increasingly difficult to breathe. The world's average PM10 levels, from 2008 to 2013, based on the data from 1600 cities in 91 countries, range from 26 to 208 micrograms per cubic meter of air (μg/m3), with the world average being 71 μg/m3. Thirteen of the 25 cities worldwide with the highest levels of PM are in India. And Delhi tops that list. 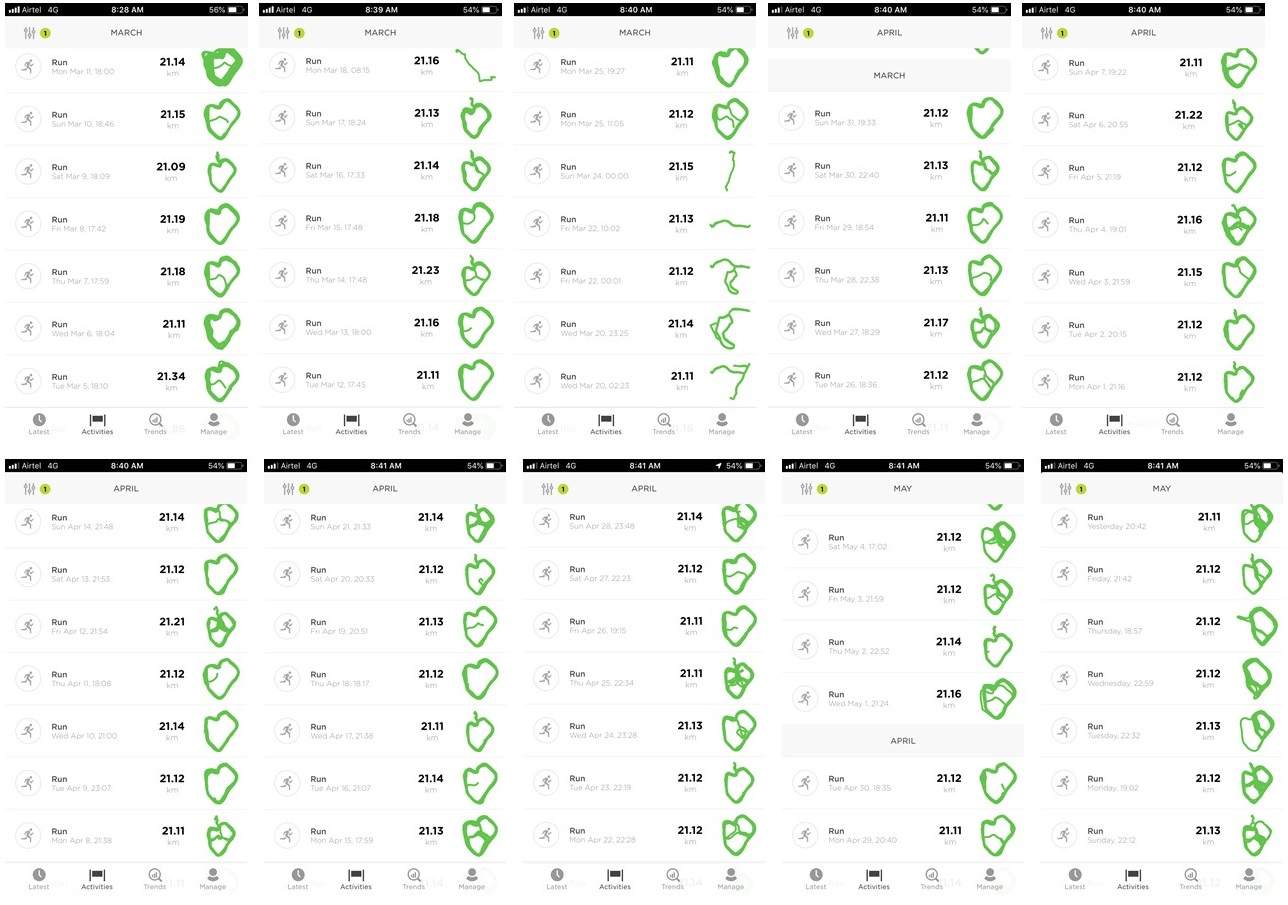 Keeping Track: Most of Sundeep's runs are around Gurugram but he has also run in Mumbai and Dublin (Pic: Sundeep)

Why running? Even though he is an avid runner Sundeep never thought at first that he will run 100 half marathons in 100 consecutive days. "The idea was to reach out to people and tell them about air pollution and its ills. I tried the social media approach but it did not have the desired impact. I needed something that will make people look up and take notice," says Sundeep, a Mechanical Engineer from IIT Delhi and an MBA from IIM Kozhikode. "The idea for the marathon campaign came to me when I was running the Mumbai Marathon 2019. I was distracting myself with ideas so that I do not concentrate on the fatigue and in the last few kilometres I came up with the idea," he adds.

It has been a tough road since March 5. With five more days to reach his goal, Sundeep has garnered a considerable amount of attention, so much so that people now recognise him on the road and his social media campaign has also picked up momentum on Twitter and LinkedIn and his hashtags #RightToBreathe and #100HMsForACause are already trending in India.

The help is not just virtual though. He recounts how a stranger came forward to help him during his run, "The gentleman stopped me and asked me what I was running for and we spoke about pollution and its effects. By the end of the conversation, he was determined to help me but said that he was too old to join me for a run so he would help me run instead. His company produces sports wipes. He gave me a whole pack for my runs," he adds. Sundeep's feat was noticed by ACC Cement for its series on common people who have had an impact on society and they released a three-minute video on him and to promote his cause.

What is more inspiring that Sundeep is not just running 21.1 km a day. He is also attending office, going on business trips, attending meetings and the whole shebang of the corporate life. But this also helped him go global. "Even though most of my runs are in Gurugram, I have also run in Mumbai and Dublin. I did not skip a single day. Wherever I am, I run the day's quota," says the man who is more energised than ever and determined to make a difference.