How engineering students from IEEE saved lives by setting up Keralarescue.in

This year, Kerala was caught off guard when the previous year’s disastrous floods repeated themselves. While activists report that most people were dangerously complacent this time around because of fake news and doctored statistics, one emergency portal by the name of Keralarescue.in stayed adrift while many of last year’s emergency mechanisms failed us. How did this last candle of light survive an information storm and blackout?

Student ingenuity. Let’s hear it straight from the horse’s mouth.

We need to start with the basics. The Institute of Electrical and Electronics Engineers or IEEE was founded in 1963 by Dr Madhusudhan S, an Indian immigrant who combined the American Institute of Electrical Engineers and the Institute of Radio Engineers. The organisation created various branches in India, including in parts of Kerala such as Travancore, Malabar and Kochi. Student Coordinator of the Kochi chapter, Nandan S says, “IEEE started their work in Kerala on February 17, 1975 as a subsection under the then India Section. Later, we became part of the Bangalore Section in 1976. We only became a full fledged individual section of our own in 1983.”

IEEE has been a mover and shaker

The organisation has been noted across the world for their contributions to society, especially through student volunteering and activism. Nandan points out, “We have had several innovations from IEEE’s Kerala Section in organising activities for students. We have received various awards such as the MGA Large Section Award in 2015 and Region 10 Outstanding Large Section Award in 2004, 2009 and 2015. What stands apart in out section has been the quality of our organising between volunteers who are distributed far and wide across the state.”

One of the organisation’s most beneficial programmes is the Humanitarian Technology initiative, also known as SIGHT, which was the first IEEE Job Fair for Undergraduate Students. This was supported by the formation of Local Integrated network of Kerala or LINK which helped build a framework that connected all the student branches in the Kerala section, building an invincible network in the region. STATE SIDE: The Kerala subsection was introduced in 1983

On August 11, 2018 the organisation’s wide reaching access to volunteers became the very thing that helped it become a lifesaver during the floods. “We had volunteers who were willing to do everything to help throughout Kerala but weren’t sure about how to coordinate them,” says one of the founding volunteers Sahil Razeel. At the time, it was the organisation’s Co-Chair of Government Relations, Muraleedharan M, who suggested building a small portal.

Sahil explains, “The initial idea was just two-fold where interested volunteers could register. In the other, people could write specifically whatever help it was that they needed. Because IEEE has a pretty reputable legacy across most colleges, we had the advantage of knowing people. We knew who was doing good work in which colleges in the city and the next big task was to bring them together.”

It was founding volunteer Biswas Jaisanker who took the idea to the next level by creating a WhatsApp group with the 7 main founding members. This included good activists from across colleges and fields who could help the cause by contributing whatever they were best at. Once they had set up the website, they decided to add a ‘contribute’ option to it. It was not the option to contribute financially, which people could easily do through the CMDRF, but it was the option for people to contribute anything else — this was the option. They could also get in touch with IEEE’s members from different parts of the state. 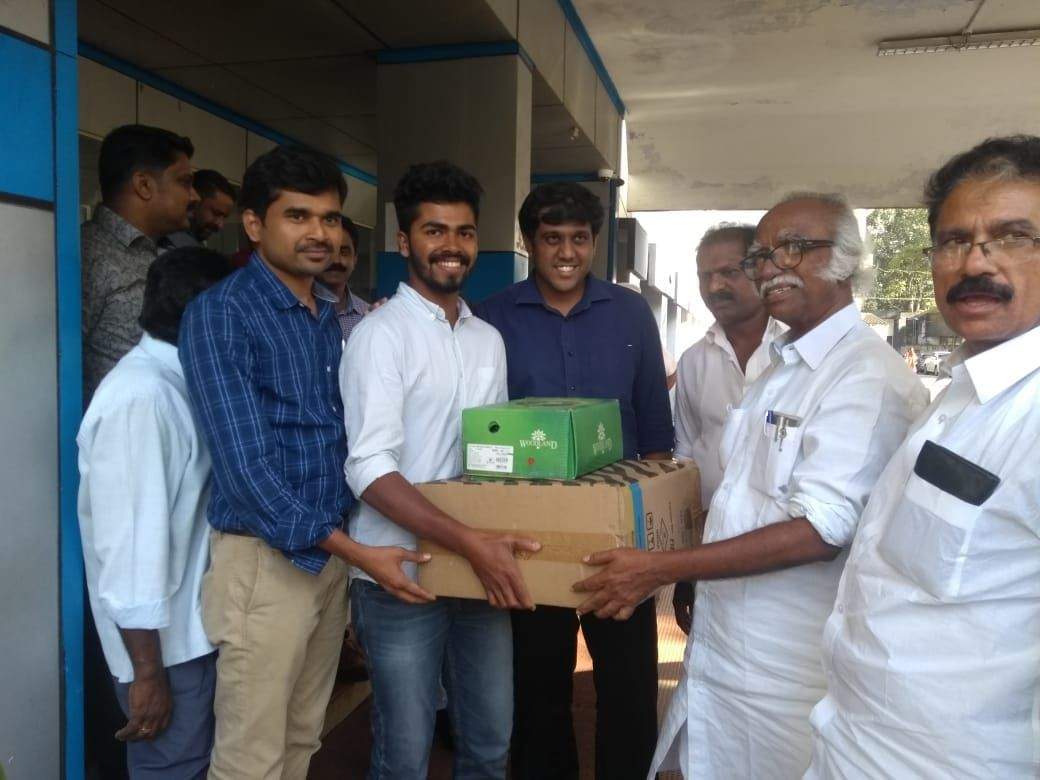 LIGHTS ON: Student-designed lamps being handed over to the KSEB

Networked for the best

They came up with domain name, Keralarescue.in after much discussion. Sahil says, “There were many domain name ideas that came up that included the word ‘flood’. That’s when the thought struck us, we are making a portal here, one that was important. It could be reused at the time of a different calamity. For instance, what we have seen this year around is not necessarily a flood per se, they are landslides and the portal has been extremely useful for people to reach out to. God forbid, even if a tsunami hits us tomorrow, the state should be able to use this in order to connect with each other.”

You do not have to be an IEEE member to volunteer with the organisation. In fact the team decided to abandon the IEEE tag when they called it simply Kerala Rescue and set the ball rolling. The initial features on the website were that volunteers could register, contribute and get a contact number. Three of their volunteers would be placed in strategic places where people could reach out to them. Following the launch, people’s needs would vary and change, the volunteers worked to catch up with these priorities. ENGINEER IT: The lamps that were created for flood victims

Orders from the top

Soon enough, the Chief Minister vouched for the portal, and within no time IEEE slowly added the Kerala government and the police as a part of their portal and as something people could reach out to. Their link was also shared by the police and Prashant Nair IAS which really brought the portal out as an option for people all over. People’s acceptance of it as a legitimate option grew along with this.

“What was truly surprising about how the initiative worked is that it was still run by ordinary students like us,” says Sahil. “There were circumstances that we faced and requests that we received where even we didn't think that a student could be of help but our volunteers were able to do it in no time. We got a call from Wayanad where a man and his son were in the midst of drowning and they needed urgent help. We would get scared when we got calls like that, but we would pass on the information and because we have far reaching volunteers, it would actually make a difference and we could help these people.”

Using their engineering to good effect

By the time they winded up work with the portal the previous year, they had more than 1000 volunteers. Concurrently, beside their main aim to get the portal up and running, there were camps in dire need of technical assistance where the volunteers needed to extend their brand of humanitarian technology. They helped by building lamps that could be run on small batteries and sent it over to various camps with the help of their volunteers from their various colleges. They would only require small batteries and would last on very little charge.

Sahil continues, “We also heard that a lot of houses lost their connectivity and there circuit boards had collapsed. To restore a basic connection, the electricity board had approached us. We collaborated with the NIT and the students created circuit boards that could be used to restore electricity and we donated them to over 500 homes. More than this, our volunteers were constantly working with people on the ground.”

Almost an exact year following its inception, the portal truly came into its own this year when the rains intensified again. What helped maintain it was the fact that the team kept the platform open source. Sahil says, “We continued to modify it and kept it open to anyone. So more than 1000 people have added their inputs to it. Why it continues to stay relevant is that it has evolved according to people’s needs. We don’t really have the luxury to think when a disaster hits us, so we add whatever seems necessary to the cause.”