The app lets you track your progress in real-time and compare and analyse where you went wrong, besides giving you access to gurus you can only dream of training under

Now that we have an app for everything from working out to organising our day, why not have an app for training in classical music as well? A Bengaluru-based company, MusicMuni Labs, has aptly clubbed technology with music research and training to launch  Riyaz - a music tutoring app that lets you get lessons from renowned gurus in Carnatic and Hindustani music on your smartphone.

Interactive: The app has a variety of courses and exercises to offer

The app is a godsend for people who don't have the time, money or wherewithal to travel distances to get great training, "Singing aspirants — whether as a hobby or profession — face enormous problems in today’s context. For aspirants in rural places, accessibility and quality are huge issues whereas for urban dwellers costs and convenience stand between them and singing," says Gopala Krishna Koduri, CEO, MusicMuni Labs. "Riyaz solves these issues and is a much better solution to the existing alternatives, " he explains.

Get those gurus synced

After initial market research, it was clear that there is a huge scope in the area of music education which can be addressed by a simple app. "We released an initial prototype sometime during October 2016 and told a few friends of ours about it. Slowly but steadily it gained some traction and it had more than 10,000 users in a couple of months. We launched the first version of this product on February 27, 2017," says Gopala. From that point on, there was no looking back. "This is the reason we kicked off with singing courses for Carnatic and Hindustani music styles on Riyaz. The students will get instant feedback on how accurately they sing with reference to the guru. All this happens on their mobile - so they can practice anywhere, anytime." 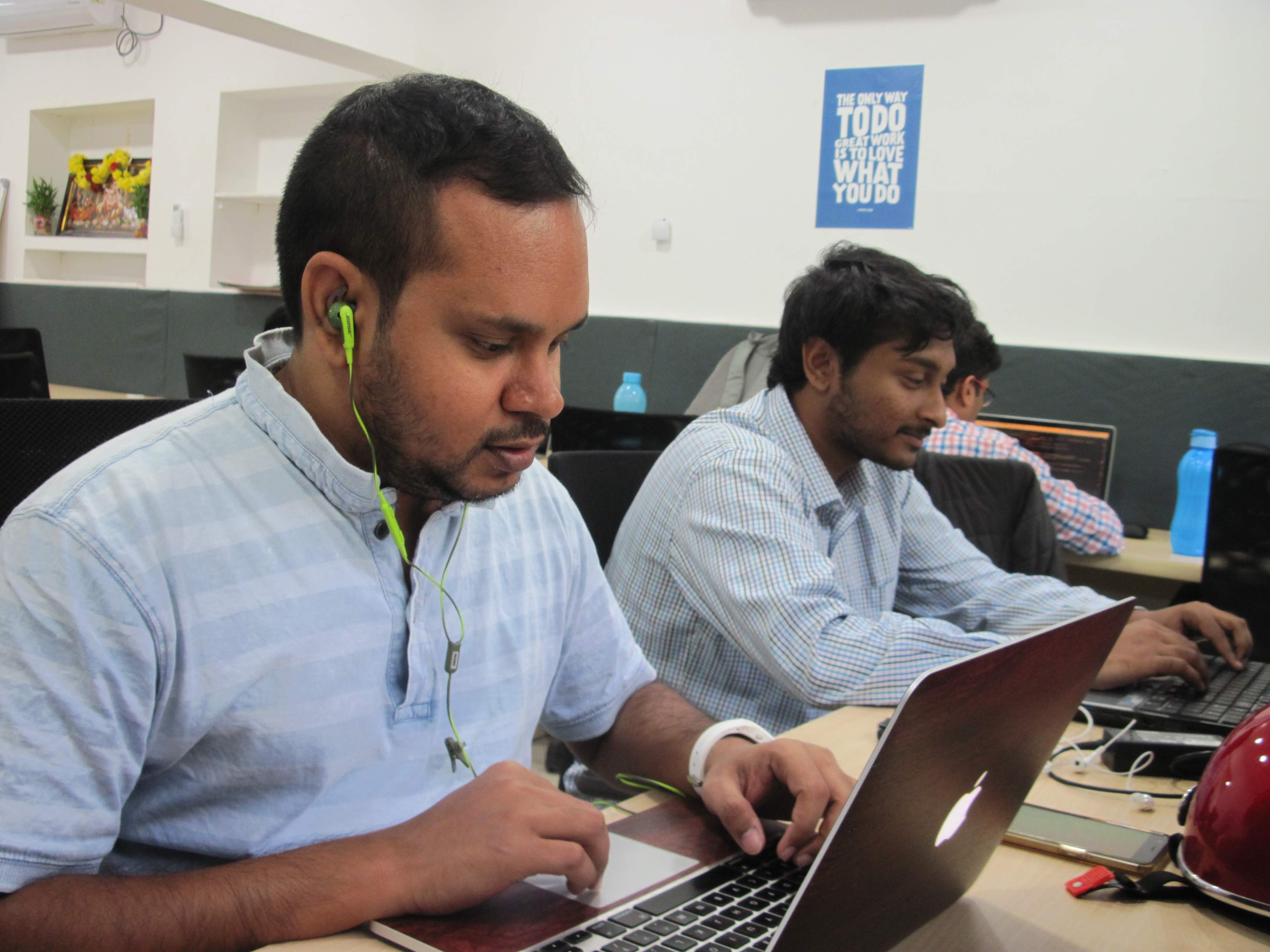 Determined: As of today, there are 850,000 downloads on Android's Play Store alone with 5000-7000 users practicing lessons daily

There are Skype classes, online music courses, YouTube channels that have made it easy to acquire information about concepts. But, most of a learner’s time is spent on practice, which require constant feedback to improve. This is the main bottleneck in building an accessible technological solution - the need for human intervention. But they've used AI to try and bridge this, "We bring in the intelligence of a human teacher to your pocket. Riyaz is an AI-powered pocket music guru which gives instant visual feedback showing the nature of mistakes made and guides you in improving faster," explains Gopala.

Roping in gurus was not that much of a challenge, says Gopala. "We have been fortunate that most gurus were able to see the long-term advantages of the technology that will entail sustained revenue for them. However, it is the new generation that realised the potential this technology has and worked with us."

They have not approached any government department for help yet. "However, we had approached AIR to help them with discovery and use of its huge archive recorded over decades. Due to changing control at the helm of the organisation, we had to drop it later on," adds Gopala. "There has been a persistent request from our users to include more music styles - specifically the popular ones. We are now expanding to Bollywood and other Indian movie songs. Soon after that, we are expanding to Western popular music genres."

As of today, there are 850,000 downloads on Android's Play Store alone with 5000-7000 users practicing lessons daily. Riyaz currently crunches the same time with users each day as would any other academy with about 400 full-time teachers.​

The journey started back when Gopala was a student at the International Institute of Information and Technology, Hyderabad. "My stay there exposed me to a diverse India that is rich in very sophisticated music styles. Since then I have been pursuing technologies that can help me build solutions that will help fellow humans experience what I have experienced," says Gopala, who hails from Gopavaram, a village in coastal Andhra Pradesh. "My PhD at Music Technology Group, Universitat Pompeu Fabra in Barcelona, Spain is where it all culminated and resulted in establishing MusicMuni Labs in Bengaluru."

It is during his visit to IIT Mumbai in 2010 when Gopala and Xavier Serra, the founding director of Music Technology Group, met. Gopala was pursuing an internship under Preeti Rao and had been working on a raga classification system. Soon after, Xavier started building a team for a European Research Council (ERC) grant called CompMusic. For Gopala, receiving the grant was the perfect opportunity. CompMusic, had around 50-60 researchers working on five different music traditions around the world — Carnatic and Hindustani from India, Makam music of Turkey, Beijing Opera from China and Arab-Andalusian music from north African countries.

Exposure to varied music helped Gopala identify the difference between the musical forms. "Western music styles are predominantly harmony centric, whereas the Eastern styles are melody centric. The technologies we have developed during my stay at Music Technology Group specifically cater to the latter," says the CEO.