Manvitha Reddy tells people that gardening is also good for stress levels and gives us some physical activity, so she asks them not to just look at the harvest or the commercial side of the plants

What’s for dinner tonight? Brinjal in tomato puree? How about sourcing both the brinjal and the tomatoes from your own garden? Whether you have a backyard, terrace or balcony, Homecrop is making it possible to grow your own veggies even in a space that’s as less as three square feet.

Homecrop has a core team of four members, along with nine additional members. They have different packs which help individuals grow veggies

Manvitha Reddy and Sharmila Reddy started Homecrop in Hyderabad after they observed the buzz around organic food. “We were brainstorming during a time when talks about excessive use of pesticide were on and Subhash Palekar’s Zero Budget Natural Farming was gaining momentum,” Manvitha Reddy recalls, who after pursuing her PG in Management from Imperial College London, knew she wanted to start something of her own and that ambition brought her to Hyderabad. They immediately saw an opportunity in this field and proposed an alternative to spending excessive amounts of money on organic produce — growing your own produce. But how do two women from non-agricultural background go about setting up a start-up like this? By doing hardcore research, that’s how. They even enlisted the help of experts from the National Academy of Agricultural Research Management (NAARM) and were incubated with a-IDEA (Association for Innovation Development of Entrepreneurship in Agriculture), NAARM’s business incubator. Verified seeds and other technical assistance was offered to them. They also opted for a mix made from cocopeat (coconut fibre) instead of soil so that it remains lightweight and absorbs and retains water. They added a layer of plant and other extracts to enable the roots to draw micro and macronutrients and the prototype for Homecrop was born. 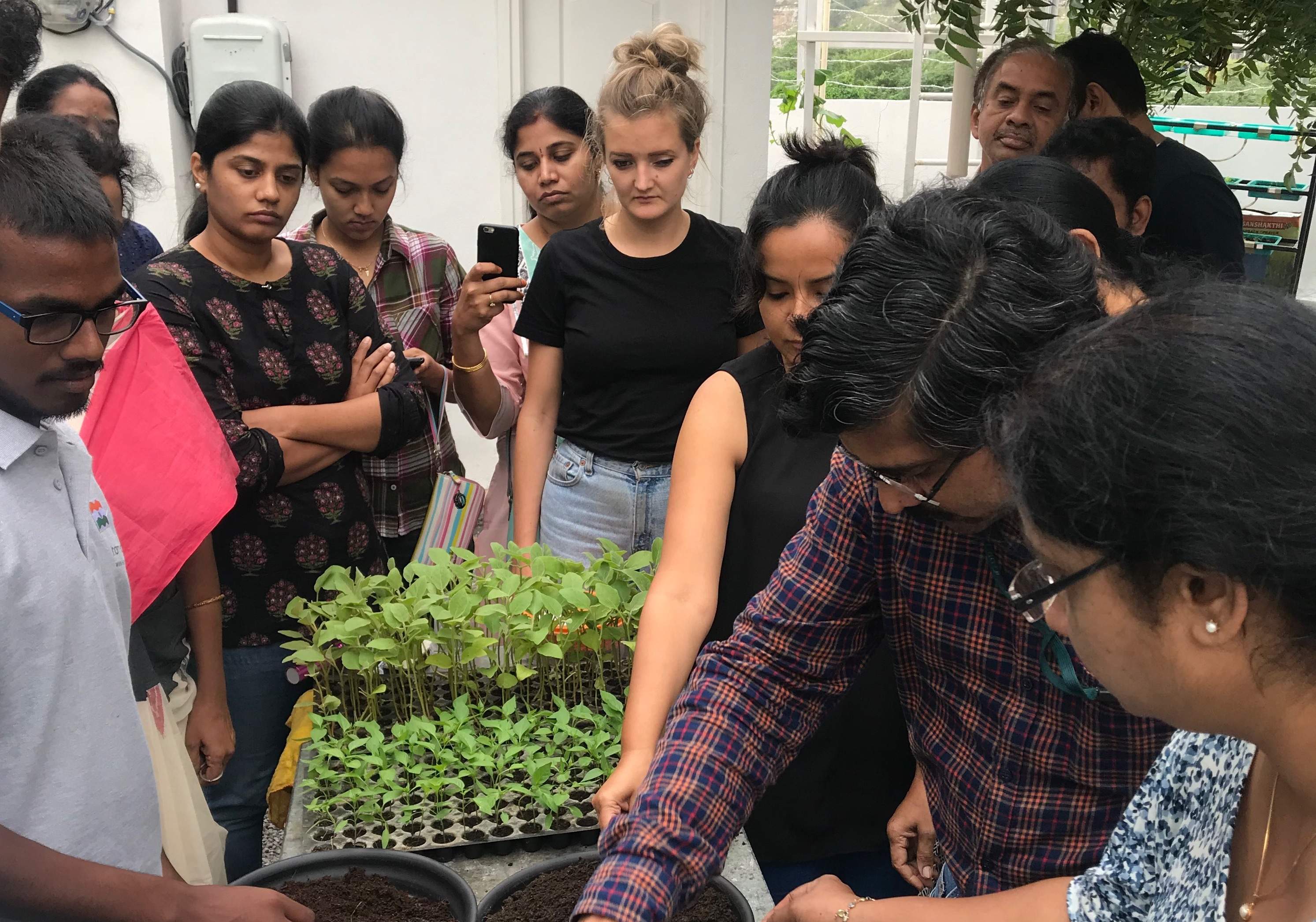 Rapt attention: Participants during a workshop organised by Homecrop

“We understood that this alone was not enough. People wanted a demo to see what it looks like first-hand,” says the 27-year-old. To counter this, they started an experiential centre in Manikonda where people could come and see for themselves how easy the process is. They even started conducting workshops to further acquaint those who were interested. Their next workshop is going to be in December, just in case you were wondering. And if you think this is it, hold on.

For those of you who have no time to spare, Homecrop intends to start a subscription model wherein they will provide organic food from their own 40-acre farm in Zaheerabad. “We are also coming up with a model where we will conduct field trips to this farm,” says the entrepreneur, who herself grows leafy vegetables, chillies and more in her own backyard. They are also planning to grow the plants themselves at the experience centre, till the flowering stage, and then give them away so that the ones interested can get to harvesting them quickly. 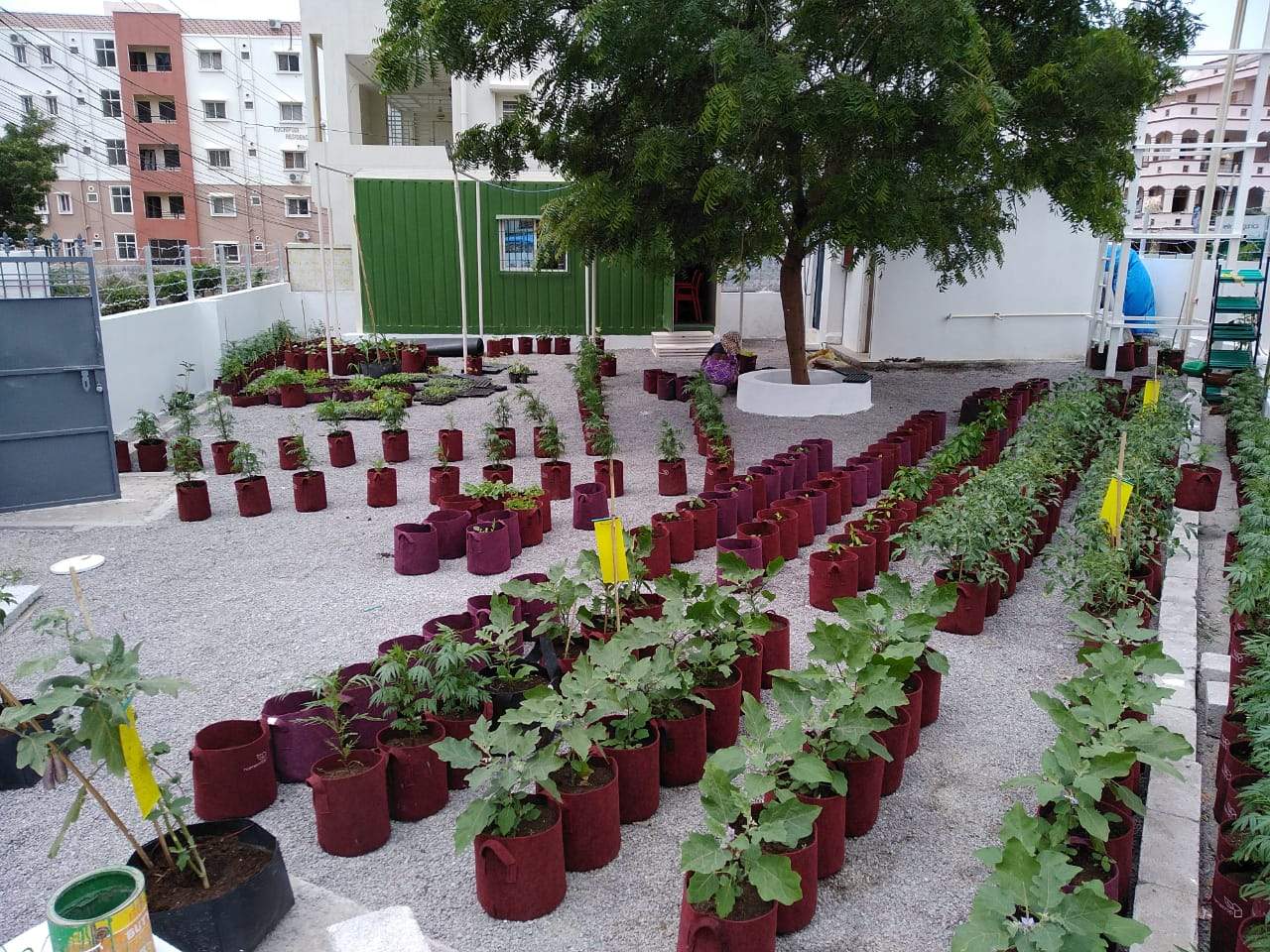 In a row: Homecrop's experience centre is in Manikonda, Hyderabad

The next challenge for Homecrop, as per Reddy, is scaling this model to other cities. Now that they are stabilised in Hyderabad and have more plans for this city too, we are sure that other places would be ready to embrace them as well.

The packs Homecrop offers
- Beginner’s pack
This pack is aimed at small spaces. Leafy vegetables, which have a minimum failure rate, are given to those who don’t have much time

- Super saver
A little extra care and observation is required in this pack where tomatoes, green chillies, brinjal and other vegetables are grown

- Pro
This requires one to spend half an hour with the plants. Bitter gourd and other veggies are recommended which require advanced care Wait and watch: Another scene from Homecrop's workshop

TAGS
organic farming Homecrop how to do terrace farming