For the first time ever, a Durga Puja in Kolkata that will be organised solely by and for street children

The Puja's venue is at Sarada Primary School, a local non-formal institution as the kids did not receive police permission to use any space and create a pandal

It is that time of the year in Kolkata when Durga Puja arrives in its mesmerising flair and the city of joy is dressed like a bride. This year too, the festive season is here and the people seem to already be soaking themselves in the spirit but not quite like these children, who reside on the streets of Baghbazar near Mayer Bari (the house of Sri Ramakrishna’s wife Sarada Devi).  It will be the first time that a puja is solely by the children of pavement dwellers.

Named ‘Footpather Durga Pujo’, which means the ‘Durga Puja of the footpath dwellers’, their theme, the kids have decided, is ‘Icchapuron’, or the fulfilment of wishes. "We have been trying to make this work since last year, we just want to make our own idol and have fun during the five days of Durga Puja. We had been to all the high-budget pandals last year and asked them to take us in but they never let us do any work, they also didn't allow us to pray and give 'Anjali' to Durga Maa. So this time, we are doing the puja here itself and we don't plan to go anywhere else," says Riya Das, a class six student who is also helping in the preparations.

Bangur resident Mahendra Agarwal and his wife Rashmi, have been the backbone of this initiative and have helped these children fulfill their wishes. Mahendra, who owns an NGO called Argobbhawva in Kolkata, said that six to eight months ago when he visited these kids he saw them making parts of the idol, drawing and creating decorations from everyday items. When he asked them what and why they were doing all of that, they told him that it was all meant for Durga Puja and that these kids wanted to do something on their own. Mahendra's NGO has been taking senior citizens, underprivileged and orphaned kids out for 'Pujo Parikrama' - tour of puja pandals around the city every year. So he asked these children if they will go with them this year, but to his surprise, they refused and said they want to host a puja themselves. 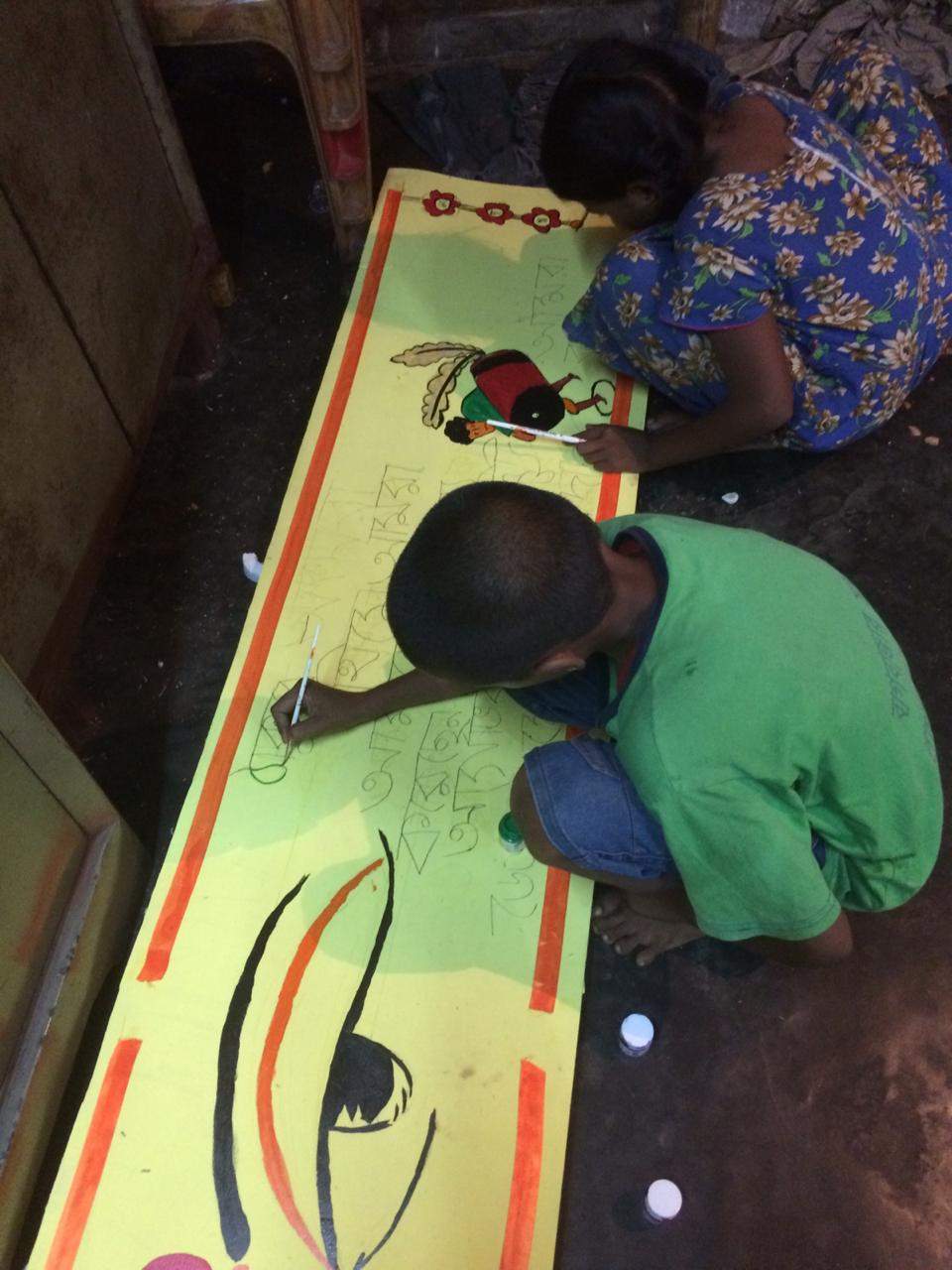 Durga Puja is a festival for everyone, so we thought if a little amount of support can be provided to fulfill their wishes then why not? After all, they didn't need more than chart paper, colours, ribbons and diyas and the budget is just 1 lakh

Mahendra Agarwal, sponsor for the Puja

Mahendra said that they got all the materials required for making the idol from Kumartuli (a place where idols are made). "Our focus is not to create a huge fancy pandal but to fulfill their wish of doing it all by themselves, so we are making sure we follow all the customs, tradition and rituals during the puja," adds Mahendra.

The Puja's venue is at Sarada Primary School, a local non-formal institution as the kids did not receive police permission to use any other space and create a pandal. The entrance of the school is being decorated with their paintings

Riya says they didn't know how to make the idol when they had tried their hand at it last year. But this time they are being guided by Mala Pal, first woman idol-maker in Kumartuli. "For the last two to three months, we have been creating the idol together. Mala Di is helping us make it perfect. We will finish before Mahalaya as we have to draw Maa Durga's eyes on that day," adds Riya with sheer joy in her voice.

"Our parents are extremely happy and proud of us as we are all a part of this. They have encouraged us throughout. We had already created the hands and feet of the idol, Mala Di helped us make the face. We are also doing all the decorations ourselves using clay teacups from the roadside to decorate the pandal, ropes to make flowers and paintings of Sindoor Khela, Maa Durga and may more," add Sujit Das, a class 9 student.

From not being able to give 'Anjali' ever, to finally being able to be a part of the biggest festivity in the city, these kids want to now make the best of what they have. We say, more power to them!