Ever wondered what it takes to become a firefighter? Take a look inside the Tamil Nadu Fire Services Training Centre

From details regarding the recruitment process to the rigourous training involved, here's everything you need to know about the training centre

Inside the Tamil Nadu Fire Services Training Centre in Tambaram, a huge poster hangs on the wall. It reads, Whenever I am called to duty, God.
Wherever flames may rage,
Give me the strength to save some life,
whatever be its age...
And if according to my fate,
I am to lose my life.
Please bless with your protecting hand,
my children and my wife.

Every recruit that walks into this place knows that unlike most jobs, this job would require putting their lives at risk every single day. Yet, they continue to march in. For some it's the honour of being a firefighter, for some it's a passion for serving and for some it's just a job with good incentives. Whatever the intentions be, one thing is common — it's a responsibility that involves absolute courage and has no compromise whatsoever.

Almost 347 recruits have been trained here since the centre was established in early 2000. "Some of the courses offered here are Elementary Training in Firefighting, a Station Fire Officer's course, a Fireman's course, Port Management Training, Training for Fire Brigade Personnel at the Airport, Fire Prevention, High Rise Building and Hydraulic Platform Operation," says C Manoharan, the District Fire Officer for the Training Centre. Currently, there are 18 recruits that are receiving training. The centre also provides refresher courses for experienced firefighters to update them on new technologies and methods. For the fireman cadre, the eligibility is a class X certificate with basic fitness levels and a minimum height of 168 cm. The candidates for Station Officer and District Officer are selected directly by the Tamil Nadu Public Service Commission. The centre also encourages women candidates to join and has trained close to 20 women so far. The duration of the training ranges from a few weeks to four months. Post the training, they are posted in stations across the country. "There is definitely an increasing trend in the number of recruits," says Manoharan. 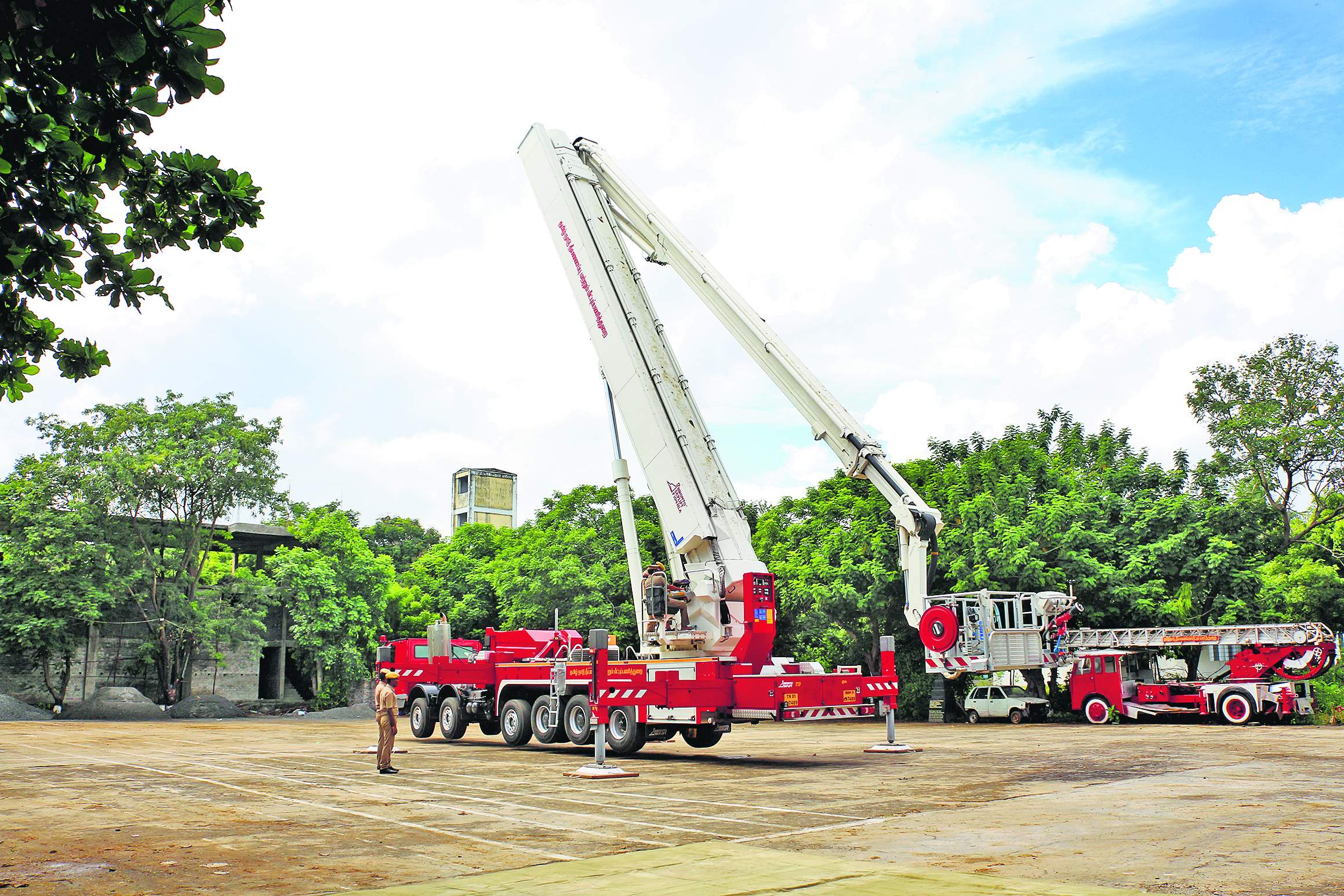 Sky High: The Bronto Skylift can rise up to a height of 104 metres

We have several drills like ladder climbing, lifting people and rescue by rope. We also have training sessions for using the breathing apparatus and putting out fires," says Manoharan. The recruits are also given training on using different kinds of water and foam jets. "It's important to know when to use what," says Manoharan, adding, "For example, we have a jet cum spray with nozzles that can rotate 360 degrees. This is only used in case of a fire in the basement of a ship, where it is difficult to find where the leak is from. The spray will spread across the area and put out the fire wherever the source. The jets we use have a maximum pressure of 100 PSI, so it takes a lot of effort, energy and training to use it right," says Manoharan.

The stars of the training centre, however, are the five sniffer dogs — two Dobermanns, two Dalmatians and a Labrador. These dogs are trained by experts to identify bodies in case of damage due to fire. "Whenever we receive calls, we immediately send our sniffer dogs to the site by jeep. There was a major fire recently at a multi-storey building in Moulivakkam, Chennai and one of our dogs identified 21 bodies trapped under the rubble," Manoharan adds. 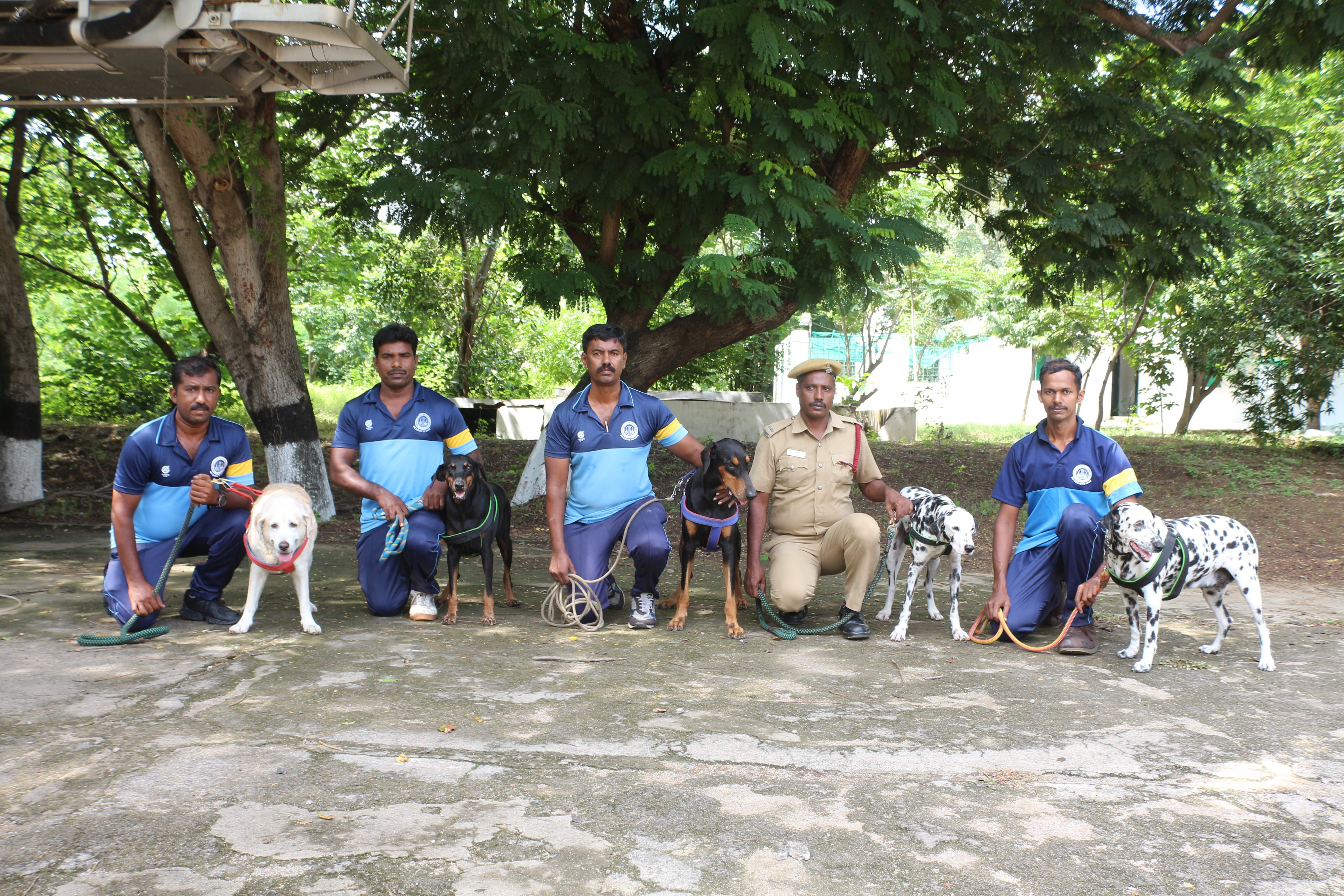 Lifesavers: The sniffer dogs are specially trained to identify people trapped under rubble

Apart from all the drills, the recruits are also required to learn how to work with the fire engines. The star attraction at this centre is the Bronto Skylift, which was purchased from Finland. The giant machine can rise up to a staggering height of 104 metres. "There are four vehicles across Chennai, two that can rise to a height of 104 metres and two that can rise up to 54 metres," Manoharan explains.

The Centre, under the leadership of DGP KP Maghendran and Shahul Hamid, Joint Director, is also involved in conducting fire drills in schools and other public spaces to create awareness on fire prevention and first aid awareness, especially during Diwali season. "We have seen a big decline in the number of fire accident calls received in the city during Diwali season. People are now aware of the precautions that need to be taken to avoid fire accidents," adds C Manoharan. Thanks to the tireless efforts of these brave souls, at least 3,000 lives are saved every year.