Life Goals: This girls' football team rocked it at the Street Child World Cup in Moscow

Karunalaya, an NGO that rehabilitates street children have sent their best team to compete at the international tournament

On Saturday, the Karunalaya team will be making their way to the airport to welcome back their soccer team from Moscow, who just finished playing their guts out at the Street Child World Cup Tournament. For those who don't know, Karunalaya is an NGO that has been working for the rehabilitation of street children for 28 years now and they can't be any less kicked about their girls' football team making it all the way to Moscow.

The Street World Cup is organised about three months before the actual FIFA World Cup takes place and happens in the same country as well. This is the second time that Karunalaya is sending a team and the first time that the girls' team is getting sent. The first time around, in 2014, the boys' team went to Rio de Janeiro and created quite an impact there.

Besides providing education, Karunalaya started sports coaching just as a way to keep the children engaged but slowly learned that the children were highly skilled and deserved bigger platforms. So for years now, the children in their rehabilitation centres have been participating in many football leagues nationally and internationally. It was only recently though that the NGO started coaching their girl members. "We thought only the boys would be interested in the game especially because the girls find it difficult to convince their parents to let them come for practice. For them to get out of their home after they hit puberty is almost impossible but we've managed to bring them to the field somehow. We very soon realised that the girls were equally skilled that's why we decided we would train the girls' team this time and send them for the world cup," said K Vasanth, co-ordinator at Karunalaya. Team India: The football team with the Karunalaya banner in Moscow, Russia

Nine girls are part of the team that was sent to Moscow, all the girls either come from broken homes, off pavements, are abuse victims or rescued child labourers. Sangeetha, the captain of the team is a former child labourer, rescued from a steel factory and had suffered abuse at the hands of her alcoholic father. Nirosha, another player came from a family where both her mother and father were alcoholics, "Her parents would send her to get "aanam" from someone distributing free food and they would ask her and her two brothers to manage with that food the entire day. She was completely neglected by her parents," said Vasanth.

Shalini, who is also part of the team was saved at the last minute from child marriage, "Her mother had taken loans and was unable to pay it back, so the loaner asked to marry her daughter instead of returning the money. And her mother agreed but Shalini somehow managed to escape and we rescued her. Now she is one of our best," the co-ordinator said.

Tamizharasi has a cruel history too and it was one of the reasons that almost made it impossible for her to go to Moscow, "She had no idea whether her mother was dead or alive and no idea about her father either. She had no Aadhaar card and we couldn't get her passport made. But then we somehow tracked her father all the way to Puducherry and brought him to Chennai. He is on the verge of death due to years of drug addiction," Vasanth told Edex. The goalkeeper, Eashwari also lived on the streets with her family but when her parents realised that she had a brighter future with Karunalaya, her parents let her join them. 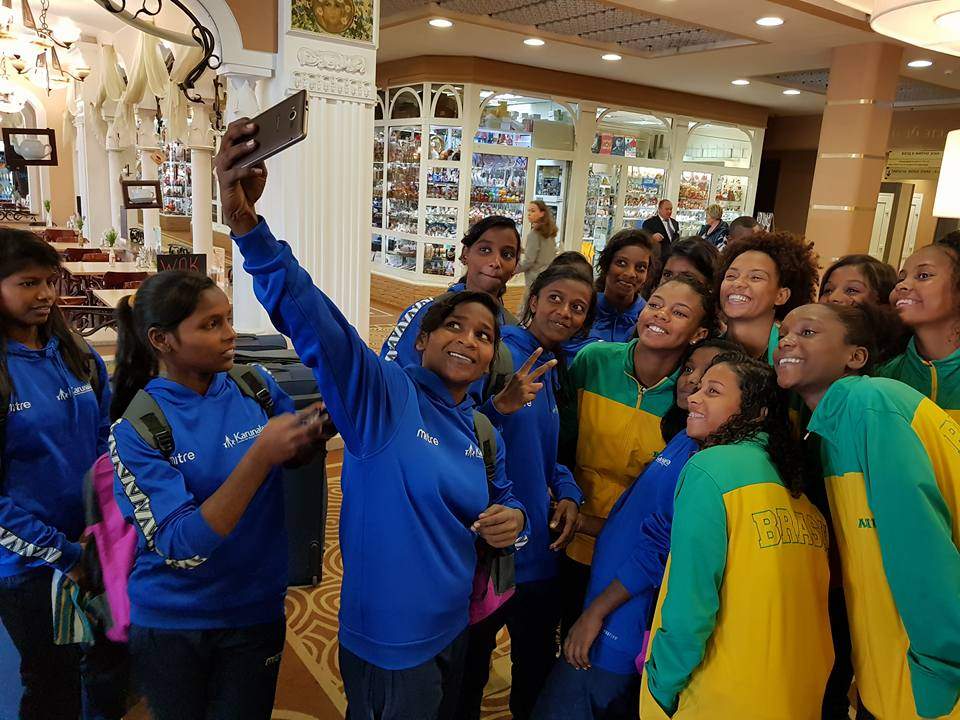 Pumped-Up Kicks: Not just football, the girls are also involved in the Street Child Congress in Moscow

However, football is not the only activity the girls were involved with in Moscow, the Street Child Congress also saw their participation. The Congress, which involves street children from across the world encourages children to learn about their rights and find ways to fight the social evils that hold them back. Their resolutions are then submitted to bodies like the UN.

"Recently when Menaka Gandhi came to Chennai, some of the resolutions were submitted to her as well. These suggestions included finding alternate ways for the children to get documents like their passports without having to go through the torture of finding their birth certificates which in many cases are either never applied for in the first place or lost," he added.

Having had what is probably one of the best experiences in their life so far, the nine girls are now all set to come back. Lets hope, that this is just the beginning for them.