I did not single-handedly organise the Farmers March: Vijoo Krishnan's journey from JNU to AIKS

Vijoo Krishnan has had enough of seeing his name glorified in headlines across social media. "I was a part of this movement (the farmers' march that shook the nation) in solidarity with the farmers. Making it seem like I single-handedly organised this movement is a great injustice, it is not proper. The Maharashtra Kisan Sabha Leaders built it up," he says. Krishnan has always had his priorities straight, just like he did when he elected to centre his PhD research on the topic of Neo Liberal Policies and the Indian Peasantry. Suffice to say that he has looked into the face of misery since his earliest years as a student at JNU. The political fervour he had left behind in the JNU campus, a place he used to call home, has made its way back in the shape of a fist that chants in harmony with the men and women who marched for their lives. Here is what he has to say about the movement:

How did you first come into contact with this cause and the politics around it?

I was always politically involved. I'm from Karivellur, Kannur and I've grown up hearing and studying political struggles. These (experience) have stayed with me. I first got involved in organised politics as a student in JNU. I became the President of the JNU Students Union from Students'Federation of India. Later, I was the HOD of Political Science at St Joseph's College, Bengaluru. Since 2009, I've been involved in matters concerning farmers. As a part of my PhD research, I had to go to villages and stay with the people to conduct surveys and study about their conditions. 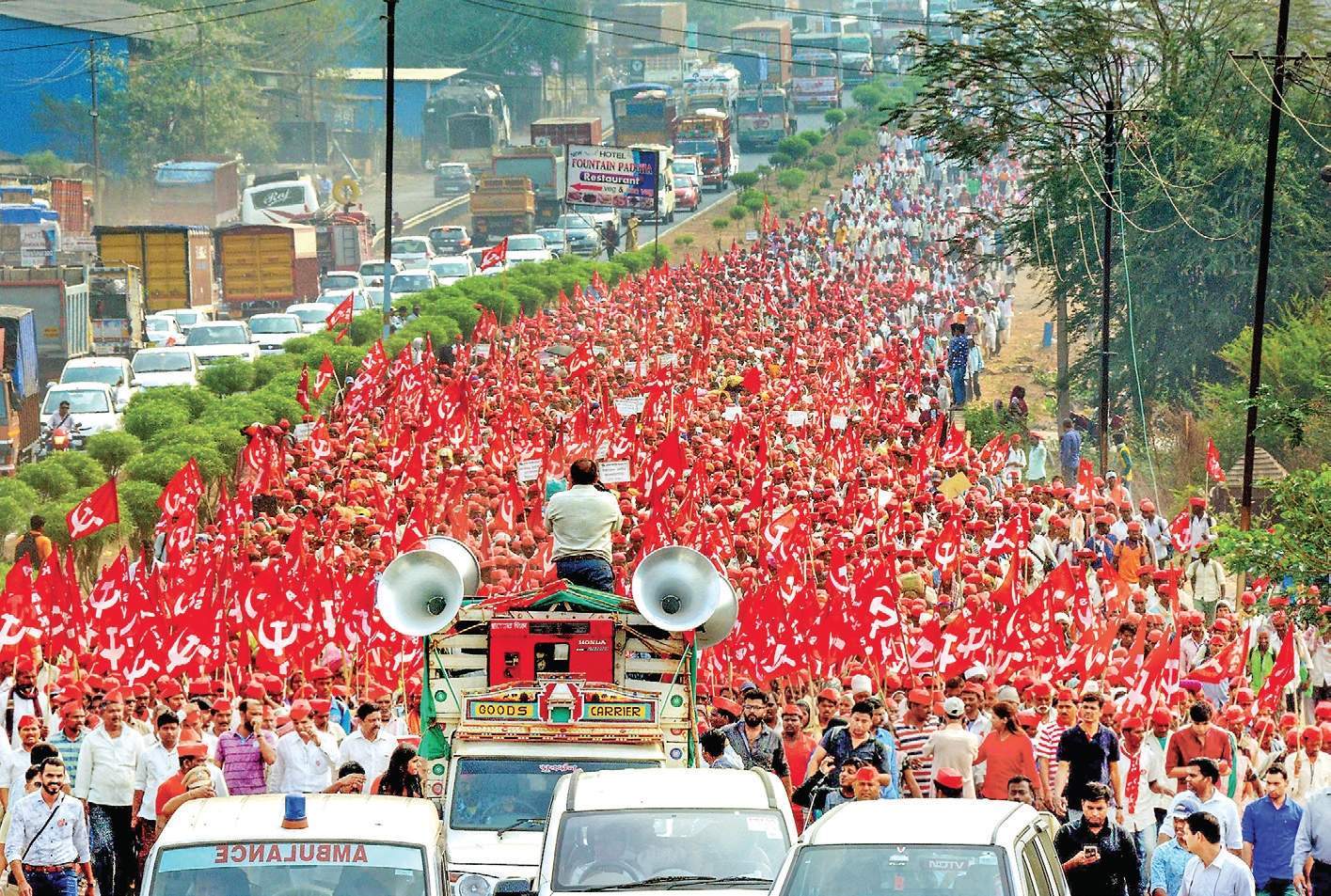 March past: The AIKS began working with the farmers days prior to the Yathra

Most people only have a very vague understanding of what led to the Long March. As someone who has seen it up close, could you paint a picture of what these farmers have gone through?

A large number of Indian cultivators are landless. Most of them are paying high rent for the land that they work on. So these people who are fighting to survive end up having to pay rent even when in distress. Since 1991 and the advent of the neo-liberal economic policies, the government has been withdrawing from agriculture. There used to be a support system through procurement and extension services. Now even that has broken down. Farmers always expect for the next farming season to be the one to change it all but they are always disappointed. They still invest in it again, by taking loans from moneylenders. They don't have enough money they to spend on education or health. Meagre savings are diverted to pay interest. These are small loans but they are eventually forced to commit suicide because of how high the interest rates are.

How have the problems escalated in recent times, especially under the current government?

Under the BJP government, there is an added attack on our livestock also. You're not able to tend to them because of these attacks in the name of 'Gau Rakshaks'.  We say, let the government take care of it by compensating the farmer and taking care of the cattle. But that doesn't happen either. The livestock doesn't differentiate between the religion of the farmers. Regardless of whether it is the field of a Hindu or a Muslim, the cow will still graze on it. This is emerging as a menace for farmers. With the previous government, there was at least some scope for some discussion. Even if they didn't adhere to all our demands, they would at least listen to us. Today, bigger movements have taken place, but we are greeted with nothing more than empty promises. This is why, this time, we've asked for a written assurance.

Our ideology stands with the most oppressed. Sure, there is a lot of criticism. But at the heart of what we do and in the heart of the movement, the left stands for those who are in need

Could you trace the beginning of the movement and when it was decided to mobilise on such a large scale?

Our comrades have been going into the field, meeting the people, preparing the villages and collecting food grains for months before the actual yatra. We have mobilised in large groups before but what stood out about it this time were the people in Mumbai and other cities who came out in big numbers to show support.

The march is already being painted as a purely political action based on a leftist agenda. How do you respond to such commentary?

My question is, aren't these people who are painting it political, the ones with an agenda? The All India Kisan Sabha (AIKS) was founded in 1936 during the British rule to fight against British imperialism and feudal landlordism. In the early days, our president was Swami Sahajanand Saraswati, a Sanyasi. We had leaders like Nehru, Jayaprakash Narayan, EMS Namboodiripad and others from the Congress and the Left supporting us. Our ideology has always been that all those who are in the interest of the Kisan will be a part of the Sabha. We called for a Kisan Sabha in every village regardless of any political preference. Yet today, many ask why there was a red flag, the hammer and sickle: the truth is that long back, Swami Sahajanand settled the debate saying it was a symbol of the blood and toil of the farmers. 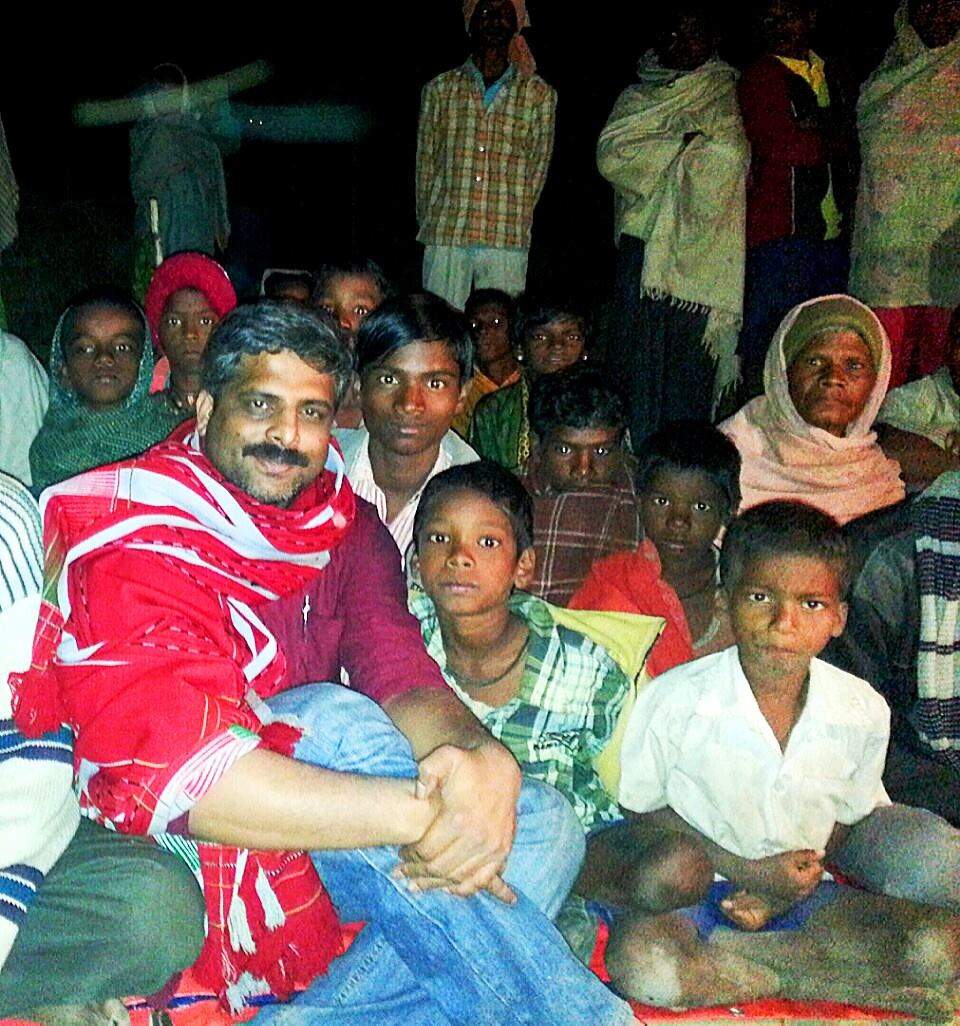 Stand together: Krishnan has been working with the farming community since he was a student

What does the leftist ideology have to offer today as an alternative? What do you believe will help it endure?

Our ideology stands with the most oppressed. Sure, there is a lot of criticism. It may also be said that more needs to be done. But at the heart of what we do and in the heart of the movement, the left stands for those who are in need. Our policies have never been oriented towards the Ambanis or the Adanis. We are basically against this existing inequality, it's as simple as that. AIKS has organised against oppression of Dalits and Adivasis. In Karnataka, we are organising Devadasi women who have been forced to go into prostitution in the name of religion. We are a part of many struggles against different forms of oppression.

What is the future of this movement?

Wherever there are anti-people policies, we will fight. We see the ruling government as the biggest betrayer of the farmers given their (actions over the) last few years. And they make it more dangerous by dividing all these issues along communal lines. We have given a call to the people to take the battle to their dens. Just today, we had a protest in Lucknow. On April 3, we have a gherao in Himachal and later, a meeting in Delhi. We are taking the struggle everywhere it deserves to go.