Every girl will remember whispering ‘chums’ or ‘Niagara falls’ as they secretly gestured to their best friend to ‘check their back’. Menstruation, and the sanitary napkins that represent it, was every girl’s secret, sneaked in through tightly folded notebooks or stuffed hurriedly into skirt pockets. From November 21 to December 8, an NGO from Kozhikode called The Red Cycle and the Sustainable Menstruation Kerala Collective (SMKC) from Thiruvananthapuram travelled all across the state to put an end to this very stigma and spread the idea of sustainable menstruation through the campaign, Aarthava Yaanam.

Arjun Unnikrishnan, a law student, who founded The Red Cycle, has been working to get rid of the taboo for years, he says, “We don’t want to limit menstrual hygiene to just sanitary napkins. The key is for people to speak about it openly and break the silence.” Under the leadership of IIT graduate, Kavya Menon, Arjun and the others have been working to spread information in colleges, public spaces and other venues, beginning with the idea that period blood is not impure.

Even for Kavya and Arjun, who speak and educate people on the topic professionally, the topic continues to be one that they avoid in their own homes. “The taboo is kept going by the generation that came right before us, our parents. I am just 21; I’m not a doctor or anything, but I realised that I needed to bring this topic up because no one else was talking about it,” says Arjun, “Especially because I am a man, their first reaction is ‘Why are you speaking about this?’ Most don’t even have the patience to listen to scientific reasoning.” With Aarthava Yaanam, the idea was to normalise such ‘sensitive’ subjects and educate people about the importance of sustainable menstruation. “In a school in Palakkad, when a girl was speaking out openly about her personal problems, her friends were tugging at her sleeves and indicating that she stop. Words such as ‘vagina’ and ‘periods’ are considered a shame, or even worse, a joke. I myself have thrown a sanitary napkin out of my hands because I made the same mistake a student would,” says Arjun.

And what is sustainable menstruation? “It represents any alternative to disposable napkins which includes menstrual cups, cloth pads or just cloth. Menstruation has existed since before the commercialisation of napkins and it is clear that there is a less ecologically damaging way to practice menstrual hygiene,” he says. In their interactions with women, they discovered that a lot of women continue to use cloth or other alternatives, but a majority still believe that sanitary napkins are a natural upgrade. 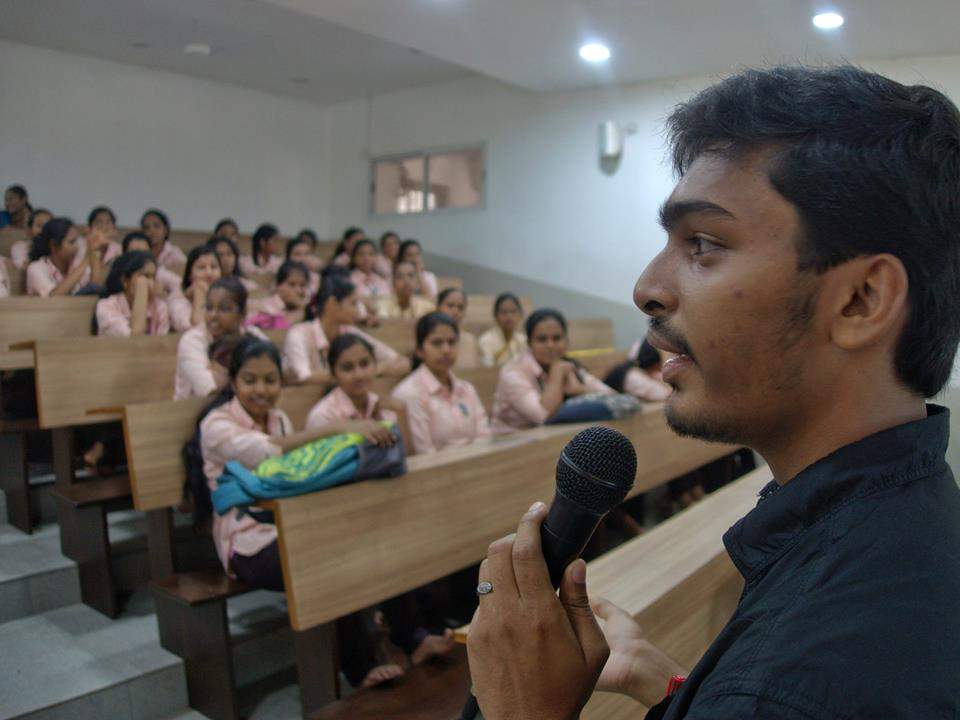 Speak out: The team educates students on the importance of speaking out about the subject

“When we visited a tribal village in Wayanad, we were surprised to find that most of the women actually used napkins,” recalls Arjun. Inspired by visitors, the women had adopted the practice and those who didn’t were ashamed to admit it. “It is sad how deep it has seeped into our culture. This is why any change that follows must be systemic and must come from the government’s side,” he adds.

Currently, there is no law in place to bring this wastage into control. “It is commendable that the government, unlike many others, has actually begun talking about this issue. But their policies are misplaced as they focus on sanitary napkin vending machines and incinerators,” Arjun points out, adding, “The environment needs our continued help and making it easier to purchase or burn sanitary napkins can’t possibly be the way to do it.”

Aarthava Yaanam is not an isolated event; it is the beginning of many more to come, the team behind it asserts. “We discovered that there is no difference between the urban and the rural, the young or the old, men or women when it comes to their awareness about such topics,” notes Arjun. This team has personally made it easier for women across the state to be able to speak up about an issue that affects them every day. It’s time we all chime in and say the magic words ourselves.