Thanks to this NGO, women in Kerala unite to say #MeToo

There is an over-used Malayalam proverb that girls have grown so tired of that the sentiment alone could set off a movement. Roughly translated, it means (read in an old, authoritative tone) 'Regardless of whether the thorn falls on the leaf or the leaf falls on the thorn, it is the leaf that is harmed'. Women being the leaf in this context. When some of the same girls became women and grew accustomed to the growing atrocities against their gender, this subtle form of victim shaming was undoubtedly the last straw. Thus, when the Raising Our Voices (ROV) foundation, an NGO that helps prevent violence against women, marched in solidarity with the MeToo movement, they decided to call it, 'Elakkalla Kedu' (It's not the leaf that will be harmed).

Nina Nayar, a member of ROV, is particularly short of patience when it comes to such insensitivity. "Let's be very honest, young people are apathetic. It is not 'Me too', it's 'I alone'," she begins. "They are not moved by injustice anymore. People get energetic when a celebrity gets assaulted or raped, several hundred people have turned up for our marches in solidarity with famous people. When we organised this march for protecting ordinary girls and boys, we didn't get any support. They are willing to support these larger-than-life figures but they are not willing to fight for themselves." Act now: The march was accompanied by a street play

The march was conducted at Maharaja's College when the members of the group decided that they had enough of the apathy. After visiting colleges and schools across Ernakulam, the organisation marched with the support of legal experts and students. "We didn't just want to conduct a march and then forget about it, it was very important that everyone involved would go back with a few takeaways," says Shyama Kuriakose, Environmental Lawyer and member of ROV. The march was planned when the group of women in the NGO realised that Kochi was not immune to the sexual violence that was being portrayed in the media. She explains, "When the MeToo hashtags started appearing in social media, we thought it was just a passing fad. But then it started happening within our own circles. We found the same sort of shock from college students when we spoke about the sort of sexual harassment that happens in out own city." 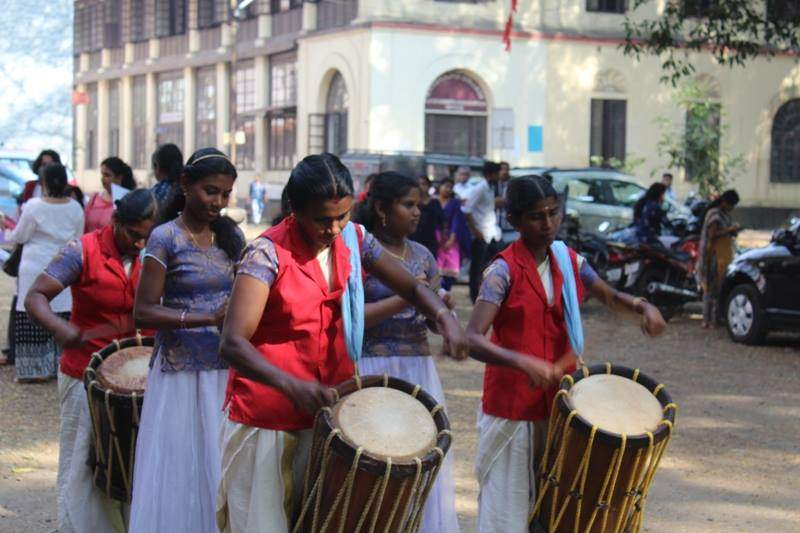 Beat of their drum: Many passersby joined the protesters

"ROV is all about women speaking out. We are a group of very boisterous women and we wanted to share this with other women and help them speak out. This was about solidarity. We wanted people to join us so we could give strength to each other," explains Shyama. And although the 65 protesters who turned out at the march were not the numbers they had expected, spread the strength is what they did. As they marched, onlookers took notice and joined them. Even cars stopped to enquire about the cause and put their plans on hold to support it.

ROV has been fighting for gender justice for years, but the march set forward a change of pace that has transformed the direction of the organisation and what it represented. The event had the support of its chief guests Justice A Muhamed Mustaque of The High Court of Kerala and Justice Satyan, Secretary of the Kerala State Legal Services Authority (KLSA). The NGO hopes to join hands with KLSA to spread information about the free legal help it provides to marginalised women. "One important result of the march is that we can extend legal help to the women. For the victim, the abuse doesn't end after the act. It is very difficult for them to survive afterwards. So we want to join KLSA to hold their hands back to society," says Shyama.

During the march, a street play was conducted at the Maharaja's campus by a troupe from Kottayam led by artist Shijo. "We were screaming it at the top of our voice but it was really the street play that captured people's attention in the most brilliant way, it really opened our eyes to what we could do in the future," points out Nina. "Our most important goal was to reach people at the local level and we think this is the way to go about it. We want to create a network of these street plays that can be acted out in different colleges and passed on until it reaches students in the deepest parts of the state." The march has just begun, there are a thousand fists tightening as these ladies decide to take their country back. And let's just say that these are some leaves that are all set to cause some harm!