A collective statement against the 'anti-LGBTQIA+ legislations in India' was signed by 34 student queer communities and individuals in support of the nationwide protest against the bills calling them 'bigoted, homophobic and trans-phobic'. "Just because we are less in number does not mean that the state can treat us like a second-class citizen," said Aroh Akunth, a student of Criminology at TISS Mumbai. "While the government claims to be in favour of decriminalising Section 377, they also pass legislations like these (Transgender Persons Bill and Trafficking of Persons Bill). It makes it clear what their agenda is." 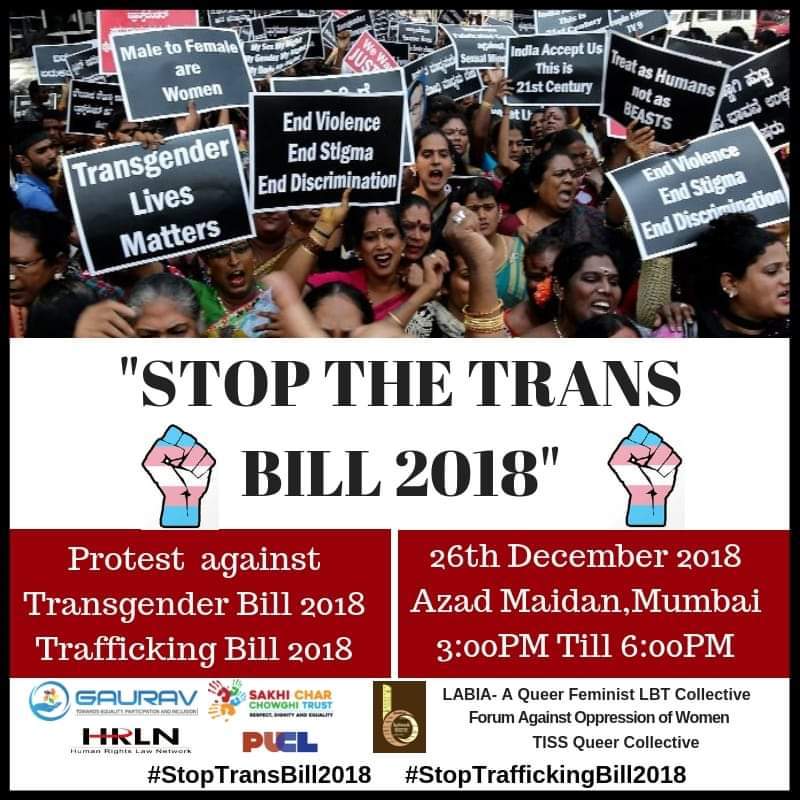 The statement said that they oppose the Trafficking of Persons Bill 2018 because "it replicates the existing discriminatory laws, brings into the ambit populations/sections that have different problems, gives immense powers to the police, creates additional unaccountable bureaucracy, criminalises whole swathes of population, and lacks any credible model of rehabilitation as it does not allocate any resources." It also lacks key definitions like forced labour and exploitation. "The Bill reflects illogical gradation of offences, new offences unrelated to trafficking (Section 41(2)); vaguely worded offences with disproportionate sentencing; anti-slavery provision re-incorporated though irrelevant; reversal of burden of proof and introduction of absolute liability offences; Introduction of strict liability offences; high levels of punishment and lack of clear sentencing policy; weak punishment for employers; violation of right to property; provisions relating to bail presume guilt rather than innocence," read the statement.

The statement claims that the Bill "uses a failed approach of institutionalised rehabilitation with an inadequate commitment of resources rather than community-based rehabilitation". The United Nations Special Rapporteurs on Contemporary Forms of Slavery and on Trafficking have also expressed their displeasure with the bill. 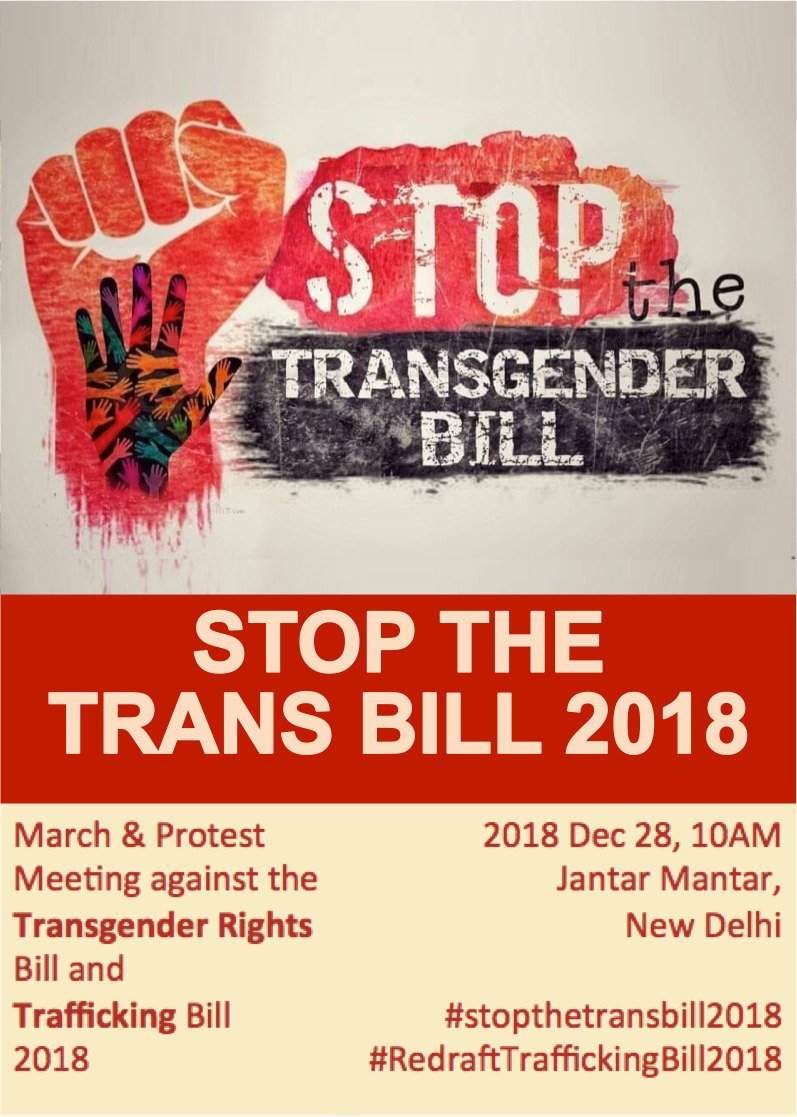 The students have also condemned the Transgender Persons (Protection of Rights) Bill, 2018 as it, allegedly, violates more rights than it claims to protect. "It is contrary to the Supreme Court NALSA verdict and violates the right to identity and basic constitutional rights, encodes discrimination, offers no reservations while criminalizing transgender community traditional livelihood of begging."

The collective statement said that the Bill stands in stark violation of the fundamental rights of transgender persons even though they have been mentioned as equal citizens in the Constitution. The Bill has created a two-tier system within the transgender community, wherein persons who have not had sex reassignment surgery (SRS) can only identify as transgender and not as male or female, and the identification as transgender depends on scrutiny and certification by a District Screening Committee. "Those seeking to identify as male or female need to have had SRS. This is completely contrary to the NALSA verdict. We
note here that the concept of a District Screening Committee that seeks to validate the ‘authenticity’ of a transgender person’s identity is not only completely against the letter and spirit of NALSA, but also provides immense scope for abuse."

The Bill, they said, is a "retrograde step" from previous iterations of transgender persons’ rights such as reservation, employment and education opportunities as iterated in the NALSA judgment, MSJE report, the Tiruchi Siva Bill, and the Parliamentary Standing Committee recommendations. The Transgender
Persons (Protection of Rights) 2018 Bill also seeks to destroy non-normative family structures and support systems that transgender persons in India have been seeking support from all these years.

It also encodes discrimination with lower penalties for sexual and physical violence against transgender people. "We call out the enormously bigoted, homophobic and trans-phobic Surrogacy (Regulation) Bill 2018, as passed by the Lok Sabha is another institutional mechanism to control our bodies. It makes surrogacy available to exclusively heteronormative couples, impairing non-heteronormative couples from availing these methods to have babies. We urge the Members of Parliament (Rajya Sabha) to conscientiously consider our appeal and send these Bills for a review by a Select Committee of the Indian Parliament.

They have extended their solidarity to the Jantar Mantar Protest on December 28, 2018, at New Delhi and to all the protest demonstrations that are happening across the country in opposition to these Bills, "We urge every citizen to join the protest at Jantar Mantar, New Delhi in our struggle for equal fundamental rights for all."

They plan to hold public discussions, rallies and talks simultaneously across campuses and cities on the day of the protest.