Kitna deti hai? These young inventors have created India's most fuel-efficient cars that give up to 250 kmpl

Welcome to the pacy and super-rad world of the Shell Eco-marathon, the world’s longest-running student competition. Four of the most exciting teams tell us why they love their cars

Unlocking the potential of both electric and fuel-run vehicles in revolutionising transport is no longer a distant dream. Hearteningly, students and young researchers from various colleges and universities in the country are creating sustainable and environment-friendly vehicle models, ready to change the world.

One awesome display of that talent and design was organised at the Madras Motorsports Club, a professional circuit in Chennai, where energy-efficient cars competed at the Shell Eco-marathon (SEM) challenger event which was in India for the first time. Shell’s global fuel-efficiency competition is quite popular among engineering colleges and Indian students have been participating in this global event since 2010.

Over 45 teams from different institutes, who have cleared the first phase of the fuel efficiency competition, 20 out of them qualified and are participating in the final showdown, a part of the marquee Make the Future festival that Shell has brought to India for the first time.

Nitin Prasad, Chairman, Shell Companies, India kickstarted the event saying that he hopes that this marathon will break the existing record for highest mileage achieved in India, "Indian students have a lot of potential and they have been participating in Shell Eco-Marathon around the world for the past four years. This year we brought the marathon to India to help more colleges to participate. Technically, this is an international event as a team from Oman is also participating." 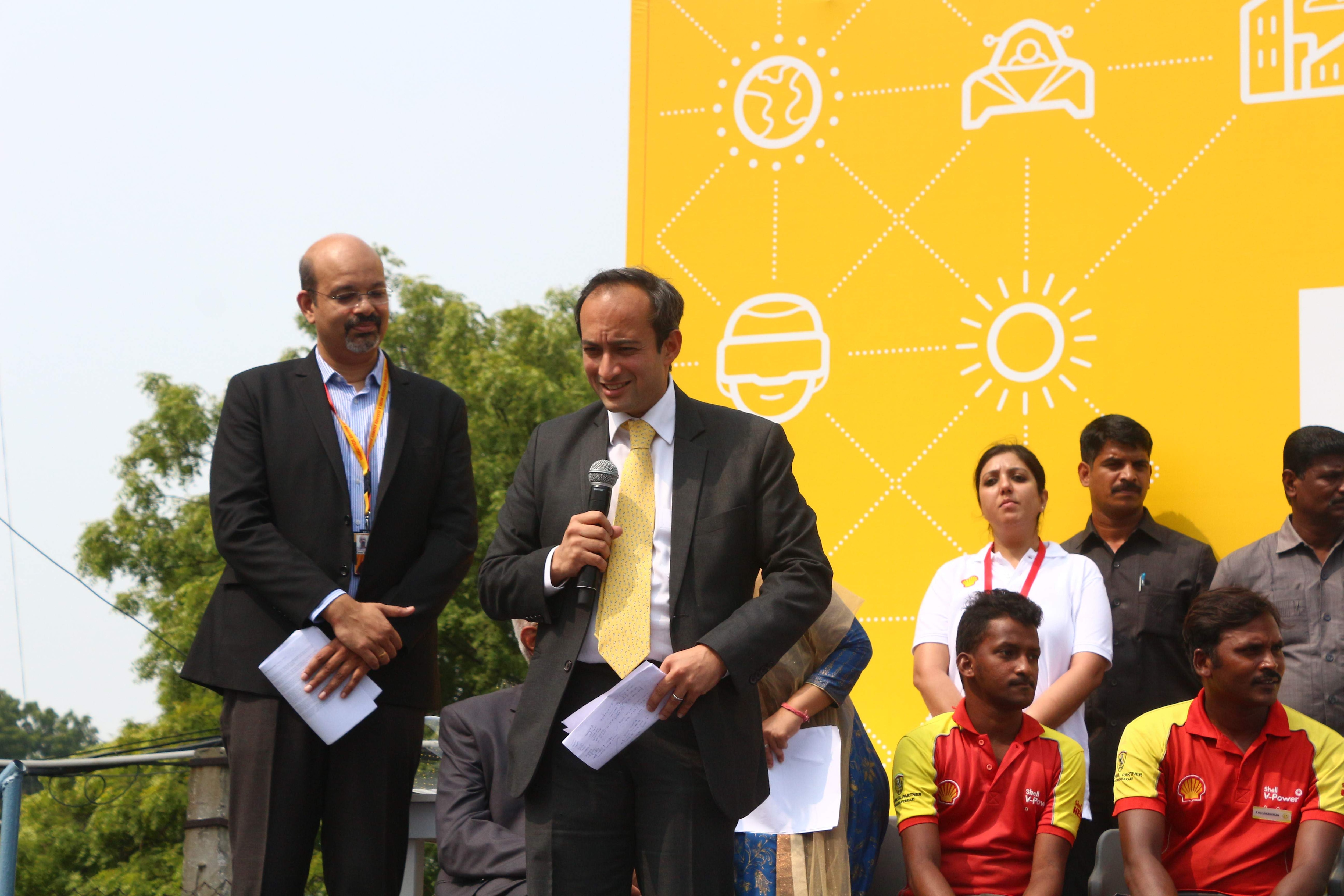 The ideas are the sole property of the students, sometimes they patent it or even end up starting their own companies. We help and support them whenever required, we also incubate these start-ups and help them progress

SEM was first inaugurated in 1939 and is the world’s longest-running student competition. Engineering students are challenged to design, build and test fuel-efficient cars. We took a look around and found that some of the teams had pretty revolutionary ideas. Check them out! 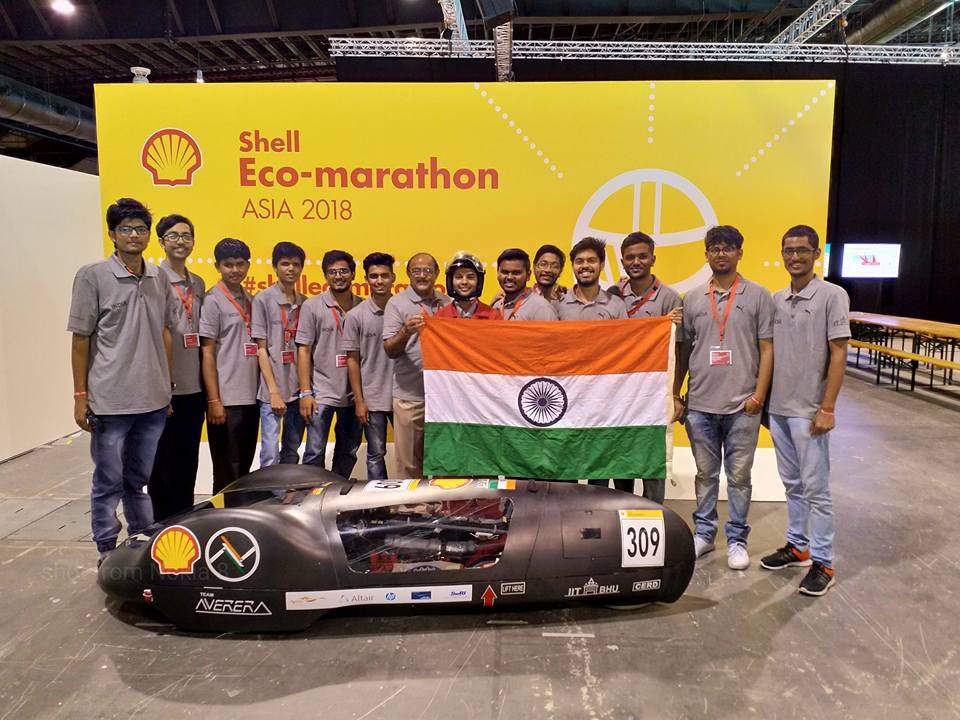 Team Averera has been participating in the Shell Eco-marathon (SEM) event since 2015. At SEM Asia 2018 they clinched the third prize while they were also ranked first among all the Indian teams.

“We believe in leaving the world in a better condition than the way we found it. We hope to make this a reality. Therefore, we are inspired to create a unique benchmark by making the world’s most energy-efficient car,” said the members of Averera.

The team had built a battery electric prototype, a monocoque (vehicle structure in which the chassis or framework is integral with the body structure) of carbon fiber and resin polymer. Its teardrop shape helps in minimal aerodynamic losses and low drag coefficient. The prototype uses an indigenously developed electric drive train with a 48V 3 phase Brushless DC hub motor with a customised controller. Ceramic bearing and low rolling tyres have been used to decrease frictional losses. The team has achieved a mileage of 400 km/kWh.

“The world has started to experience the consequences of climate change. To address this global challenge there is a dire necessity to transition from fossil fuels to low carbon energy. In India, switching to cleaner and greener energy will be a task. Even today, 75 per cent of electricity is generated through coal. In such a scenario, even if we shift to electric vehicles, it won’t help us,” explained team Averera. Team Infieon Supermileage has been participating in SEM for the past six years. Under the gasoline prototype class, the team ran their vehicle ‘Hope’ on the track. It has been designed keeping in mind minimum weight and maximum coasting. The engine modified to 50cc will give better efficiency edge on the track and a mileage of 100 kmpl. All the components of the prototype are not outsourced but have been entirely created by the team.

“Tackling the rising air pollution has become the need of the hour. The air quality is worsening each day. It is, therefore, important to reduce CO2 emission in the environment. By having fuel-efficient vehicles, it is possible to deal with the problem. We have built an engine that produces less NOx emission,” said the team members of Infieon Supermileage.

For them, SEM provides a platform for the ultimate learning experience and promoting research and development work which is an integral part of designing and fabricating a fuel-efficient vehicle. The teams can share and exchange ideas with the brightest of minds from all over the world. SRM University provided the students with a space to work as well as 24x7 electricity for anything that they needed to build the prototype, irrespective of the time or cost. 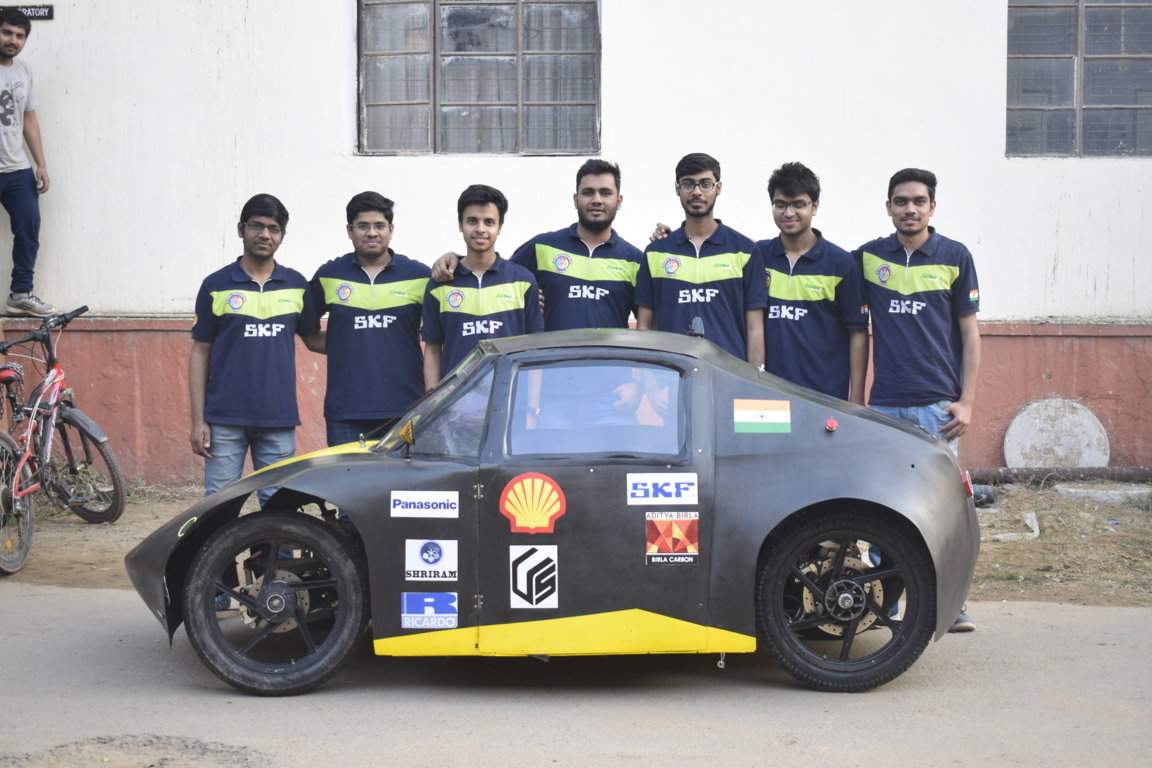 Team BITS’ prototype works on ethanol and uses a customised 98cc bike engine to power the vehicle. They have made significant changes in the engine to make it ethanol-compatible using a custom piston, improved intake and exhaust manifold. “We are also using a Continuously Variable Transmission (CVT) generally used in scooters but modifying it to improve the fuel efficiency of the prototype. We hope to gain a mileage of 120 kmpl for the event,” said the team, right before they hit the tracks, “Technologies such as ethanol direct injection, thermal barrier coating and electronic valves are also being worked upon to improve the thermal and combustion efficiency of the engine.”

Team BITS' prototype has the cool looks of a racetrack bad boy but is compact at the same time. “The idea of building a car on our own is the most motivating thing. We share a common belief of taking up a challenge that is beyond our capabilities and working extremely hard to achieve it,” explained the members.

Everyone is talking about an alternative fuel with consistent hikes in petrol and diesel prices. “Ethanol was an option that we wanted to experiment with since it is a biofuel and a renewable energy source. Ethanol also has a unique trait of having oxygen in its molecules that helps completely combust the fuel in the engine. The fuel is also quite affordable in comparison to other fuels,” said the students. 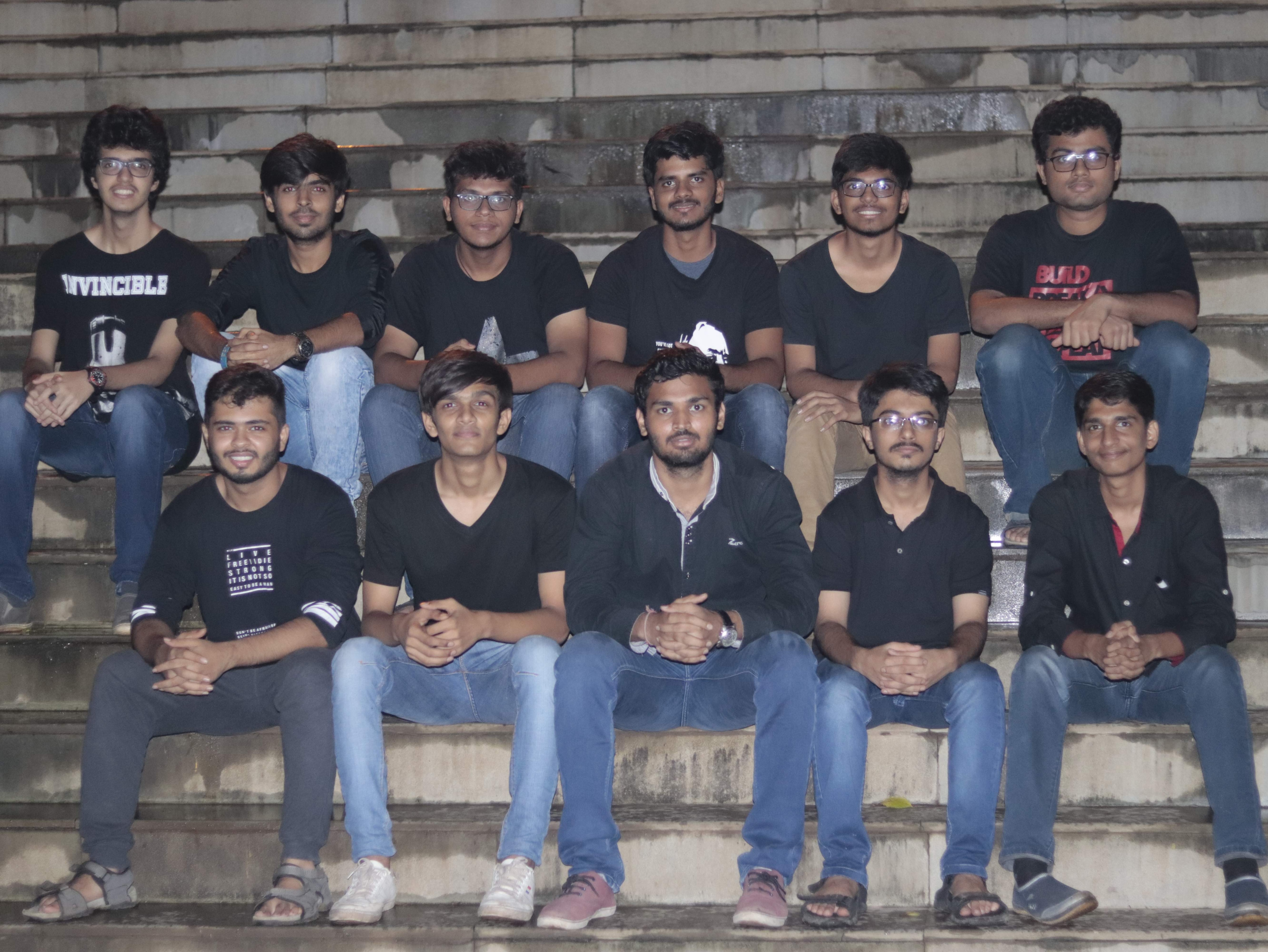 Team ETA was formed six years ago to explore projects on building fuel-efficient vehicles. “Our objective is in alignment with SEM’s goal of addressing tomorrow’s energy challenges and defining the future of mobility,” said members of Team ETA. “At SEM 2015, the team’s performance stood out and we were ranked 5th across Asia. With a hope to grow stronger, we are participating this year.”

This year, they participated in the gasoline prototype class. “The vehicle, designed in a raindrop shape, has a monocoque carbon fibre body that weighs merely 8 kg. The light-weight body reduces the drag coefficient (the resistance of an object to air) to 0.07,” added the team. “It is expected to give a mileage of 250 kmpl. For a smooth driving experience and greater coasting ability, the vehicle uses a single chain drive for its transmission system along with a mechanical slipper clutch to disengage the rear wheel from the engine shaft. The hybrid ceramic bearings in the wheels will ensure a frictionless drive.” 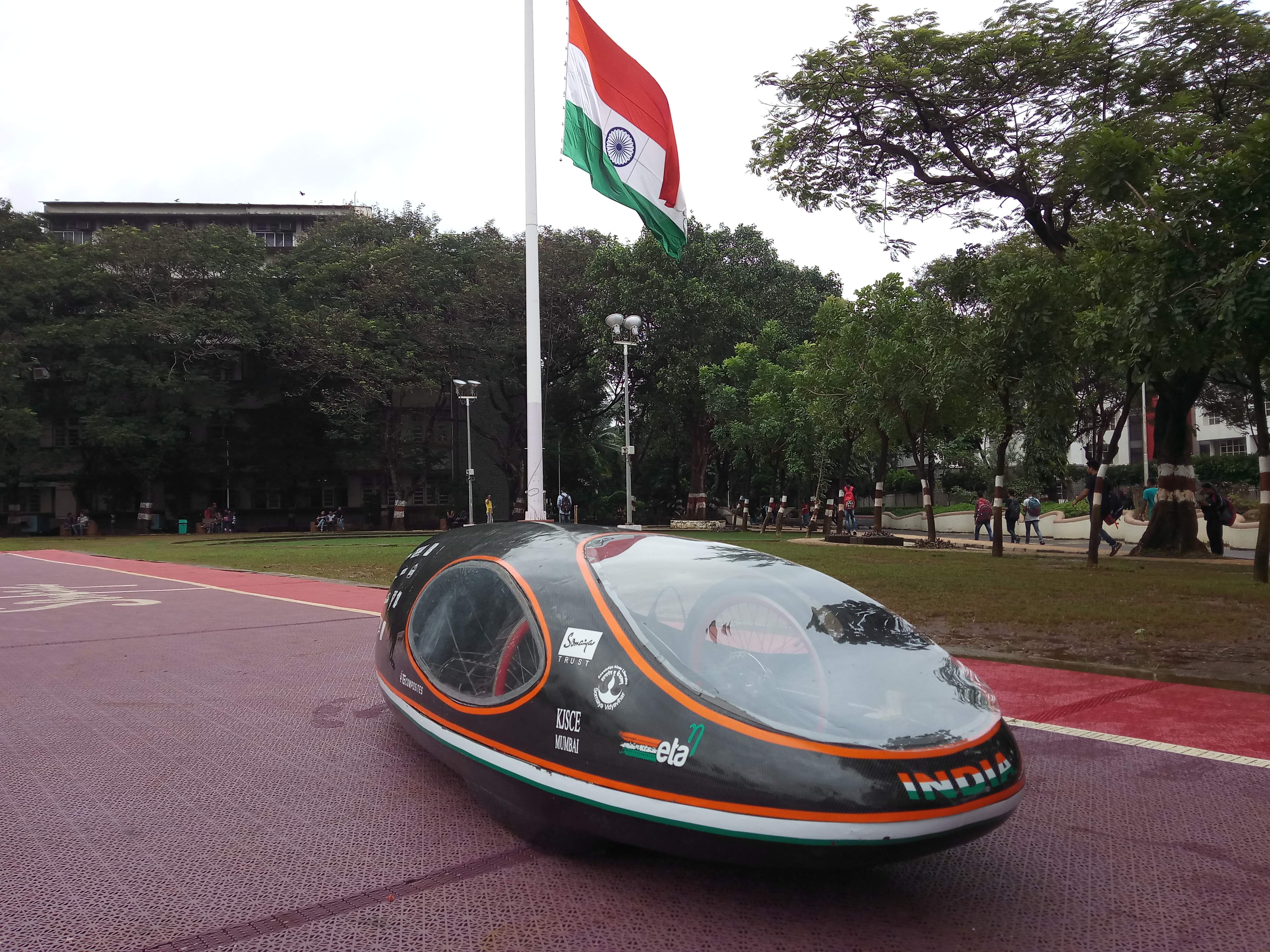 The team said that their project is socially relevant and will make our lives easier in the days to come, “We need solutions to reduce the rising fuel prices and CO2 emission in the environment. It is the time to have environment-friendly, cleaner and greener vehicles plying the roads. So, we tried innovation in fuel-efficiency this year by designing a car that consumes less fuel and gives a good mileage.”