Bitten by the travel bug: This Kochi native left a high-profile job to become a travel blogger

Johann Binny Kuruvilla, a native of Kochi, earns a livelihood from his travelogue about his various trips along with photographs that make it popular among readers

If Dulquer Salman was a reel life itinerant in 'Charlie', this man is its real-life avatar. Bitten by the travel bug, Johann Binny Kuruvilla left behind a high-profile job to be a successful travel blogger, journeying through diverse locales such as the Northeast as well as foreign countries.

His blog titled Escaping Life has numerous followers and the Kochi native earns a livelihood from it. Johann pens a travelogue about his various trips along with photographs and popularises it among the readers. His live updates on Instagram, Facebook and Twitter are also popular among travel enthusiasts.

He said the mechanical life in the Gulf and his love for travel made him impatient, forcing him to return to Kochi in 2016 after five years. Johann said during his stint in the Gulf, he travelled every three months by saving money.

"I was deeply influenced by the film 'Neelakasham Pachakadal Chuvunna Bhoomi' and was desperate to travel to Nagaland after watching the road movie," he said. But unfortunately, due to certain issues, he had to change the destination and travel to Sikkim, Assam and Arunachal Pradesh instead, he added. 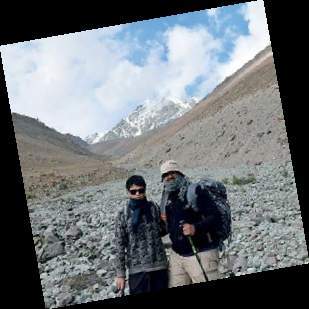 Obsessive compulsive traveller: This Kochi native earns a livelihood from his travel blog

After his Northeast trip, he wrote down his experiences in a Facebook post which was well-received. This inspired him to travel more and write about the trips by starting a blog. He mentioned as the name suggests, Escaping Life intends to influence someone to take a small escape from their busy schedule and enjoy a journey.

"When people say they get the real feel of travel by reading my blog, I feel proud and happy for choosing the right path," he said. Most of his trips whether within India or outside are solo endeavours. "I never book any accommodation in advance and carry a book and pen along with money. At times, I have slept at railway stations and by the roadside," he said.

Johann also dreams to climb Mt Everest and become the first civilian from the state to do so. He has trekked in Everest base camps in Nepal and experienced a 150 km adventure trekking in three weeks. He mentioned sooner or later, he wishes to fulfill this dream.

The traveller also dreams of starting a tourism company which will be engaged in experiential tourism. "Today, whenever tourists visit a place, they wish to taste the culture indigenous to that area. I wish to provide such a facility," he said.

Johann said he always had the passion for travelling from childhood. "My family did not have a great financial backup to go for trips. My mother used to me tell that once I grow up, I can fulfill my passion, which is exactly what I am doing now," says Johann, who is all set to make his first trip to Vagamon today to celebrate his birthday.