Bangalore Literature Festival: What it's like to witness Kumble, dragons and fairytales lighting up young minds at the children's session

So, what were people doing at The LaLit Ashok Bangalore two Saturdays ago? Attending the Bangalore Literature Festival, of course. Duh! But wait, I wasn't there. I was at Children | Literature | Fun. Wonder, the children's event at the Bangalore Lit Fest. Why? The child in me couldn't keep her curiosity down. Don't blame me! After all, there was Anil Kumble, Krishna Bala Shenoi, Aparna Athreya and many others. This and more happened at Children | Literature | Fun, where several children-centric sessions were planned. The two-day event saw a number of events, from storytelling to a quiz, to introduce children to the world of literature. As I sat down there (pretending to be a child), here's what I found.

Take out your camera

‘Chit-Chat with Jumbo' was a one-hour session with the former ace cricketer, Anil Kumble but it had nothing to do with cricket. Wondering why? Anil Kumble, or Jumbo as he was fondly called during his cricketing days, chose to talk to the kids about his passion - photography. “How many of you here are photographers?” asked a curious Kumble, who sought to understand his audience. With not many kids raising their hands, Kumble continued, “Have all of us here taken selfies? Well, that is a start.”

During his session, the retired cricketer displayed a few of his photographs as he discussed with the children what went on behind the lens while clicking those pictures. From teaching them the rules of the jungle to a passion for wildlife, Kumble’s session gave the children food for thought. He educated them on the do's and dont's of photography. Nostalgic, the wildlife photography enthusiast also recollected how he began with just a simple camera and eventually moved on to better ones.

“Was it not a risky thing to do?” questioned a child in the audience as Kumble displayed a picture of a tiger that he had clicked, while another sought to know how pictures ought to be taken in a forest. “It is important to know the etiquette of the forest. There are unwritten rules that one must learn and always remember,” he said. 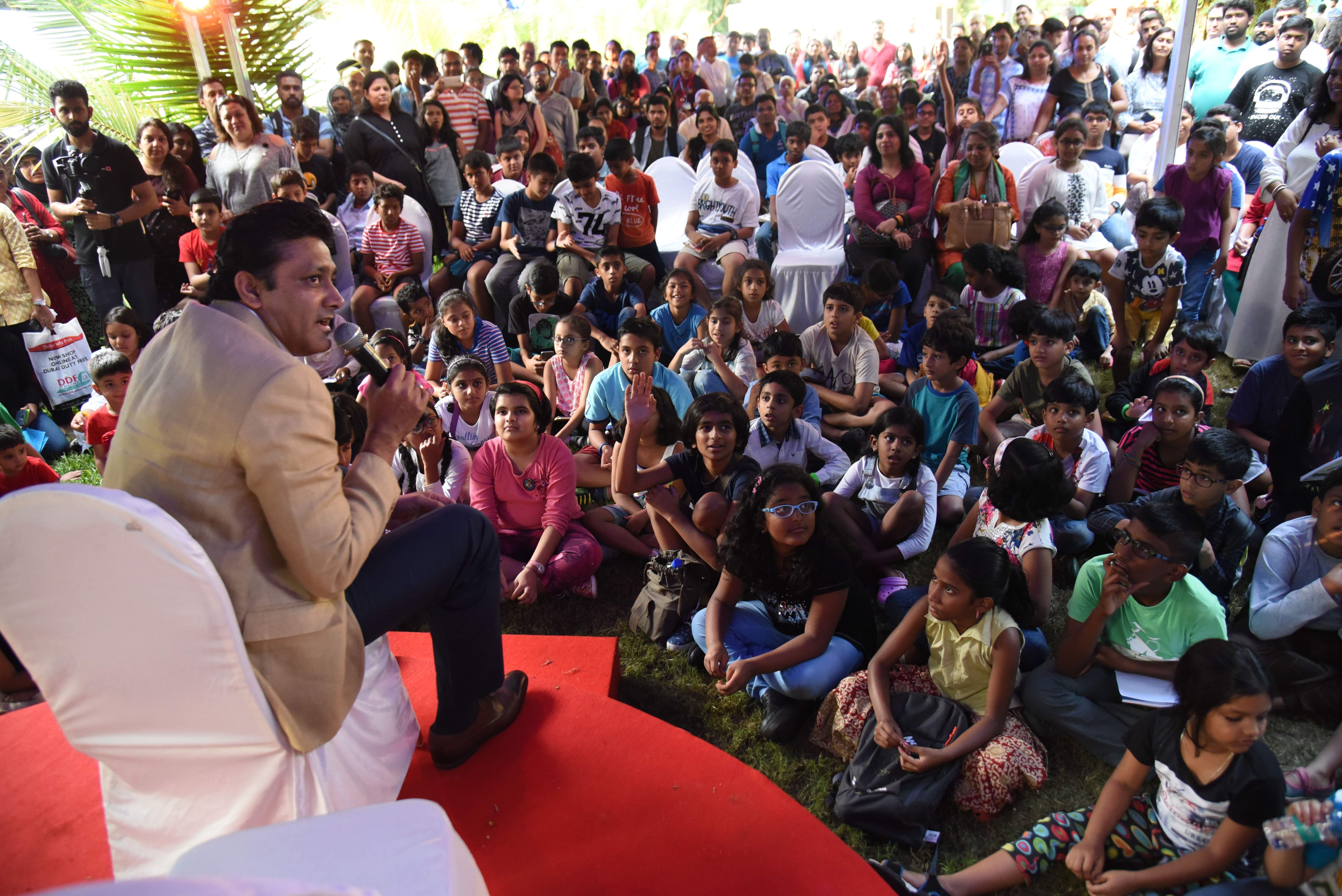 Off the field: Kumble's secret passion for photography was exhibited after he discussed and answered in detail about the art

Stripping it down to the basics to inspire children to take up photography, Kumble educated them about observing objects and not just looking at them and making sure that the focus is right when one clicks a picture. “When you venture into a forest, you cannot just wait only for a tiger. Keep your eyes open to capture the various exotic birds as well,” he added.

Speaking to the children about what made him passionate about photography, Kumble recollected, “A friend of mine had a place near Kabini and the cricket team wanted to go there. We also did a film on conservation. That was when I developed a passion for wildlife and then on, I have always been travelling with a camera,” he said.

At the session about fairy tales and mythical beasts, the challenge they had before them was to name fairy tale characters. Questions on how short stories are to be filed and what happened to Rapunzel were discussed at length. A heated discussion on how dragons can do more than just breathe fire ensued. “Of course dragons exist for real and they live in China,” argued Kashyap Venkateswaran. This five-year-old, who is a student of VIBGYOR High, participated in the Children’s Lit Fest and was assigned a task to draw dragons.

Just as artist Krishna Bala Shenoi took to the stage as part of the ‘Drawgon Time’ session, asking children if they had seen dragons before, some said that they had seen them in movies and books. A confident Kashyap, however, was quick to react when he said that dragons did exist in reality.

Exhibiting his artistic prowess and showing the kids a thing or two, Krishna said, “Give me a shape and I will draw a dragon from that,” only to leave the kids enthralled. What followed were several versions of dragons as these children were given some free time to draw. The artist left these children inspired to draw more dragons when they got back home. 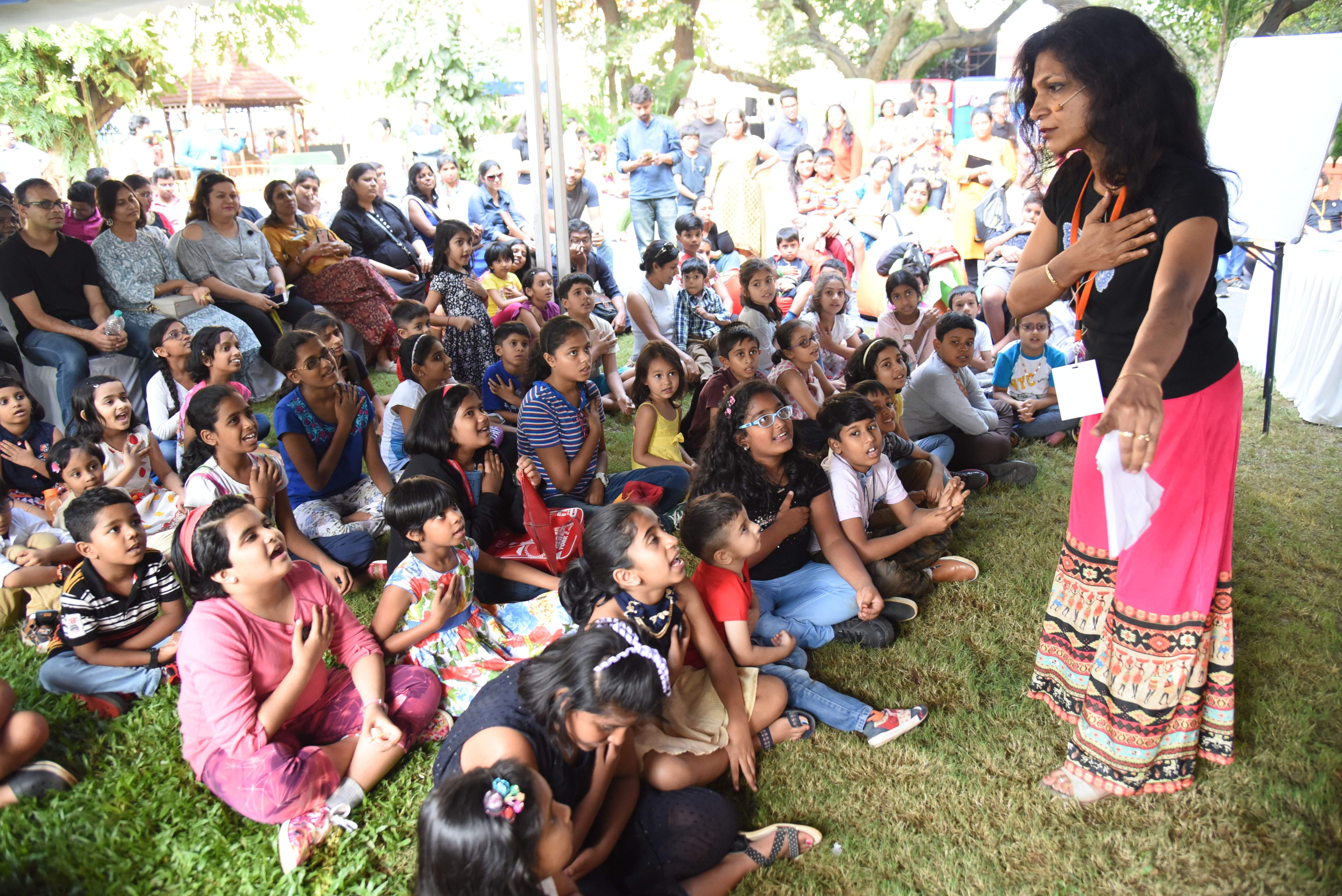 Tales of yore: Aparna Athreya got the kids lost among fairies and ghouls

Which one's your favourite?

‘Storytelling Master Mind’, a session by Aparna Athreya, had the children up and about as she chose to ask them about the different fairy tales that they had read. From giving clues to identify the characters in fairy tales to eliciting responses from them on what they had read, it was a knowledge check session here for the children. At the quiz session, there were plenty of prizes to be won and what do most kids love the most? Chocolates, of course!

Just like all the kids that I spent the day with, I had a great time just being a part of the fun and I cannot wait for next year's edition of Children | Literature | Fun!