Besides law enforcement agencies, the Railways and the Army this research can also help self-driving and autonomous vehicles as they also require high-quality images taken by cameras

Indian Institute of Technology Madras researchers have developed enhanced image processing techniques to mitigate the impact of haze on images captured by surveillance cameras. This can prove to be crucial in helping law enforcement agencies solve crimes and help the common public as many communities are now installing CCTVs to safeguard themselves. This research can also be applied to self-driving and autonomous vehicles as they also require high-quality images taken by cameras for efficient and safe navigation, especially in urban areas.

"We haven't spoken to anybody yet or marketed but the Railways or the Army can make good use of it. In mountainous regions specifically it will be useful to the Army as it's better to get a clearer picture when there's already a haze due the weather in the atmosphere. With the clear picture they can see where or how close their enemy is for example," says Professor AN Rajagopalan, Institute Chair Professor, Department of Electrical Engineering, IIT Madras, who was spearheading the team of researchers. He adds that it took about four to five months to develop the techniques and they had begun sometime in late 2019.

Although CCTV cameras are helpful in providing the evidence of a crime, the quality of the image is negatively impacted on foggy or hazy days. The visibility of a camera goes down on such hazy days, rendering it difficult to take a clear picture or to capture a clear video of a scene. 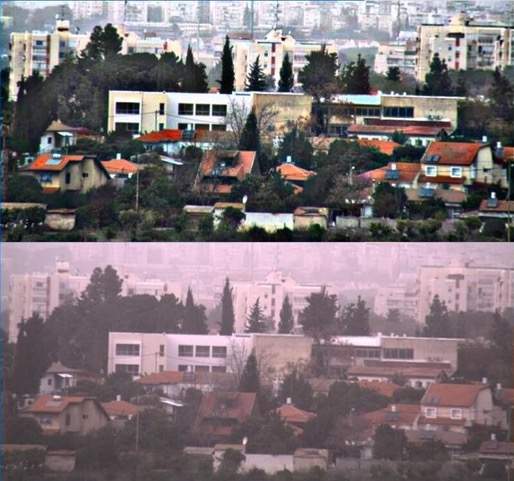 In order to tackle this issue, a team of researchers led by Prof Rajagopalan proposed this new approach to increase the visibility of images degraded by haze. The results of their research were published in the prestigious international peer-reviewed journal of IEEE Transactions on Image Processing. This is a major step forward in the area of computational photography and image processing.

Elaborating on their research and its impact, prof Rajagopalan, added, “Most computer vision applications including surveillance, terrain classification and autonomous navigation, among others, require high quality pictures and haze can severely undermine performance. ‘Image de-hazing’ is beneficial even in personal and public transportation systems. Reducing the effect of haze is a very challenging problem, more so when only a single observation of the scene is available.”

Further, he explained: “Now that we have a process in place which can yield almost haze-free images, surveillance can be done in a better way especially in winters or in mountainous regions. After this successful research, we are looking at addressing heavy haze and other adverse weather conditions.”

The haziness in a scene as captured by a camera has a lot to do with how a human or a camera perceives an object or a scene. The light first falls on the object and subsequently some of it gets absorbed by the object itself, and the rest is reflected back. The viewed or recorded image should ideally reveal the original colour contrast and brightness of the scene. However, the medium between the object and the camera can decrease the amount of light which reaches the camera. The particles in the atmospheric medium reflect ambient light which gets added to the directly transmitted component to produce a hazy effect in the captured image. When there is haze or fog in the air, the suspended particles block the reflected light causing a shift in colours and poor contrast. To add more, this also sometimes creates a white veil that results in bad picture quality.

To solve this issue, the team of researchers devised a post-processing technique to mitigate the effect of haziness. The scientists modelled portions of haze in the image from the standpoint of the image formation process itself. They worked to correct specific aspects responsible for haziness in an image and the decrease in intensity of light and change in image colour due to haze.

They based their research on the premise that if an image is considered as comprising of several local patches, then the similarity with the neighbouring patches must relate to the similarity in depth of the image as well. In case there are abrupt changes in patch similarity then it will typically imply changes in depth information too.

The scientists stated that as the degradation of image quality due to atmospheric conditions increases with depth, the patch similarity within a local neighbourhood can be used as a measure to estimate the parameters of a model that captures the effect of decrease in intensity of the image. The parameter corresponding to haze component is computed by using non-local mean of patches which show abrupt changes. Using a similar approach, the research team was also able to handle haziness in images taken in night-time or even underwater.